With less than three months to go until the start of the 10th Les Voiles de St. Barth Richard Mille, the line-up for this anniversary edition is continuing to grow with highlights such as the US Maxi 72 Bella Mente returning to action, and several boats that completed the Route du Rhum Destination Guadeloupe.

A number of the competitors in the legendary transatlantic race have committed to sail Les Voiles de St. Barth Richard Mille to test themselves against truly stellar US-based competition on one of the Caribbean’s finest race courses before they return to Europe.

Already, nearly 50 teams have confirmed their attendance at the 10th edition of Les Voiles de St. Barth Richard Mille, scheduled to run from 14 to 20 April 2019.

“We have high hopes for this anniversary edition and we’re delighted to note that already, in addition to the return of some familiar faces, we’re preparing to play host to a great many new boats,” said François Tolède, Event Director, who is also relishing the prospect of welcoming several participants from the last edition of the Route du Rhum Destination Guadeloupe, and the Rhum Mono and Rhum Multi categories in particular.

Among these is Nicolas Magnan at the helm of Javelot (SOS Pare-Brise during the Route du Rhum), a 45-foot aluminium Gilles Vaton design. The Marseille-based architect and specialist of port-city urban development spent the past two years restoring the boat in preparation to race in the legendary transatlantic race, which ultimately saw him secure 8th place in his class. He’ll be keen to get the very best out of her at Les Voiles de St. Barth Richard Mille and is delighted to get a chance to discover the event whose patron back in 2017 was his friend Lionel Péan. A top-flight match on deck for the IMRR Multihulls

This same enthusiasm for the event is echoed by the crew of Olmix, the winning boat in the Route du Rhum’s Rhum Multi category with Pierre Antoine from northern France, who not only dominated the race hands down in his category, but also added a few extra lines to the history of the race. A winner of the 2006 edition of the Route du Rhum in Multi Class 3, in 2018 he diverted his course to rescue fellow competitor Lalou Roucayrol after his capsize.

Due to work commitments as Director of Research at the CNRS, Antoine is passing the helm of his 15-metre trimaran to Pierre-Yves Derrien, who will face no fewer than four of the competitors from the Rhum, starting with second placed Jean-François Lilti.

“This will be my first time participating in the event and I’m already delighted at the prospect of racing in the turquoise waters of Saint Barth’s and discovering the island’s famous French Touch,” explains the skipper of the catamaran (an Avocet 50) in the colours of the Ecole Diagonale pour Citoyens du Monde.

The other three Rhum boats are Rayon Vert skippered by Alain Delhumeau (7th), Pampero skippered by Bertrand de Broc (10th by the name of Cre’actuel) and Guyader Gastronomie sailed by Christian Guyader (11th), who will be giving his all in a bid to hold onto his IMRR Multihull title at Les Voiles de St. Barth Richard Mille.

“It’s a fabulous event. There’s no way I’m going to miss it, particularly on this anniversary edition,” said Gilles Lamiré, who is bringing back his trimaran La French Tech Rennes Saint-Malo, with nearly the same crew as last year (Arthur Le Vaillant is sailing with Figaro Bénéteau this season).

No doubt Lamiré, a frequent competitor at Les Voiles de St. Barth Richard Mille, will be a force to be reckoned with, as the boat finished fourth in the Route du Rhum’s Multi50 category. The skipper has every intention of improving on his 2018 time in the Richard Mille Record Trophy, which currently stands at three hours, 27 minutes and 24 seconds for the 49-mile course between the islands of Saint Barth and Saint Martin. 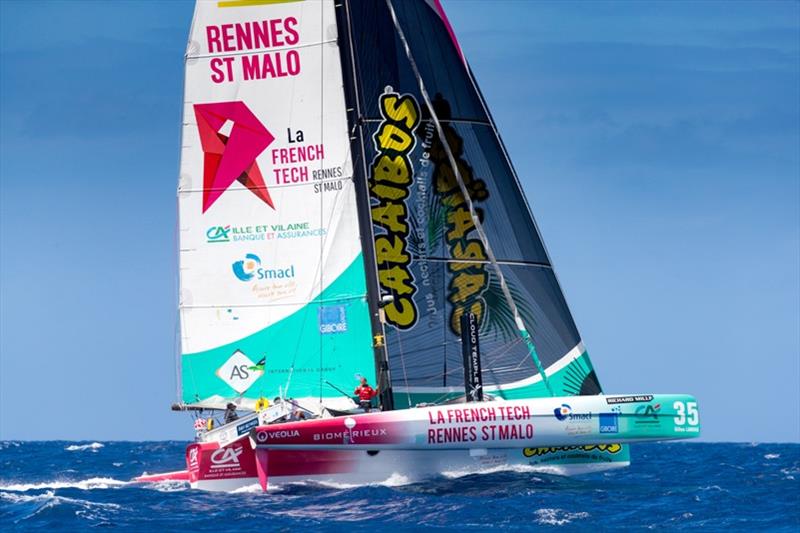 Focus on the Cookson 50, Kuka3

Securing victory in the RORC Transatlantic Race last month on Kuka3, Swiss sailor Franco Niggeler and his crew will be competing in the RORC 600 in February followed by Les Voiles de St. Barth Richard Mille in April. Designed by Farr Yacht Design and built at Cookson in New Zealand, this 50-foot sloop features a carbon mast and a hydraulic canting keel with a trim tab arrangement, making her a formidable competitor among boats of this size. She’ll be racing with a crew made up of amateurs and professionals: “We have spoken with other sailors and all said that Les Voiles de St. Barth Richard Mille is a very pleasant regatta, well organized, in a beautiful island with all amenities. Some of the best you can have in the Caribbean! ” indicates Franco.

Indeed, after a year’s absence, they return with a brand new boat, launched back in July. Designed by Botin Partners and built by New England Boatworks, Bella Mente satisfies the very strict standards of the Maxi 72 class, the rules enabling all the boats in this category to demonstrate a level of performance that is as similar as possible.

“I’ve been thrilled to immerse myself in the development and build of a new racing yacht and discover how to optimize the speed of the boat in order to get back in the game,” said Fauth, joking that his team’s nickname is ‘Experiment’ due to the in-depth tests and analysis performed on the boat each season.

“When we sail at this level, the smallest detail can shed a whole new light on things.”

Triple champion of the Maxi 72 Cup, Bella Mente will be up against three other Maxi 72s during the 10th edition of Les Voiles de St. Barth Richard Mille: Sorcha, Proteus and Momo.