For sailors from Europe, North America and Australasia, the China Cup International Regatta arrives at the perfect time in the year.

In early November, the temperature in Shenzhen hovers around the mid to late twenties, perfect T-shirt weather during the day with the occasional need for a light jacket in the evenings.

By this time of year in Europe, only the keenest of sailors are still out racing on the weekends. Most have packed up for the winter. Downunder, in Australia and New Zealand, it’s just the start of the season, spring in the southern hemisphere. This is why so many sailors converge on Shenzhen from every corner of the globe. It’s a great way to fill that gap in the domestic racing season.

Scott Perry brought a bunch of friends from Uruguay, and a few from neighbouring Argentina, to play with the big boys in the highly competitive Beneteau 40.7 one-design fleet. Against some stiff competition, Uruguay was fast out of the blocks. Among the favourites were Cheche Racing from Spain, skippered by a five-time J/80 World Champion Rayco Tabares Alvarez, and a young group of Kiwis representing the Royal New Zealand Yacht Squadron.

If anyone it was the Kiwis whom most had pegged as the favourite for the regatta, having won the regatta two years previously, albeit the make-up of skipper Laurie Jury’s crew was quite different then. Steering this year was Nick Egnot-Johnson, currently second ranked in the match racing world. If there’s one thing that top match racers know better than almost anyone, it’s judging time on distance to the start line. Unfortunately the Kiwis proved a little trigger happy and nudged the start line a smidgen too soon, copping a disqualification for infringing the dreaded U Flag that was flying from the race committee boat.

Meanwhile the Uruguayans got a ‘good enough’ start, working their way through a lottery of light wind that was patchy and shifty. Perry’s crew came through for the win, although the smiling skipper was humble enough to acknowledge that a large chunk of luck had blown his way. Such is the way of yachting, where you take the good fortune that comes your way with good humour, and try to mitigate the ill effects of any bad fortune. 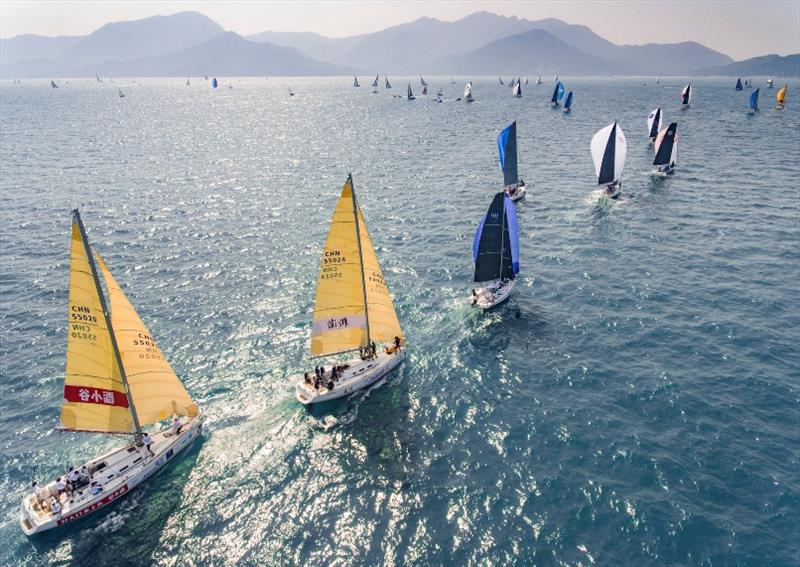 Day two offered better breeze but for the Kiwis – their backs already against the wall from their unforced error in race one – things went no better in race two. Another start line infraction, and their hopes of winning a second China Cup trophy vanished barely before the regatta had got under way. Meanwhile Cheche Racing was beginning to hit her stride, with the Spanish soon establishing themselves as a class apart in the 40.7s. The Cheche crew is a tight bunch of friends, mainly from the Canary Island of Lanzarote with a few mainland Spaniards along too. They had a lot of fun in Shenzhen, but then who doesn’t when you’re winning!

While Cheche was all about the winning, other crew were marching to a different beat, with slightly different aims in mind. The highly decorated New Zealander, Olympic medallist and America’s Cup veteran Craig Monk, had put together a young crew of talented but raw Chinese sailors on board ChinaOne.Ningbo. Monk also had some key professionals on the boat including Australian match racing star Keith Swinton at the helm of a 40.7 for the first time. But the main aim of the campaign was to blood the young Chinese sailors in the art of sailboat racing at the very highest levels of the sport.

“Six out of 10 on board are Chinese, and we’re really excited how things are panning out,” said Monk. “The plan is to integrate these guys into our international team. This is the most Chinese nationals we’ve had on board with us. We’re keeping it realistic, if we were top five we’d be really happy.” As it turned out, such was the rate of progression of this crew throughout the regatta, ChinaOne.Ningbo came in fourth overall, just one point behind a boat full of America’s Cup veterans on board Down Under Racing Team.

Swinton was amazed and impressed at the rate of gain of the young Chinese he was sailing with and felt they could have climbed on to the podium if the wind had come through on the final day. “A really enjoyable week. Very good racing, just disappointing not to have had a chance to see what we could do on the final day. It’s been an amazing level of progress for the team this week, considering how badly we started and where we’ve got back to. The Chinese sailors on board have done such a good job with our crew work and the communication. We had some really tight racing with the Kiwi team and we outdid them on some of the boathandling, which is amazing considering the communication challenges across two languages.” 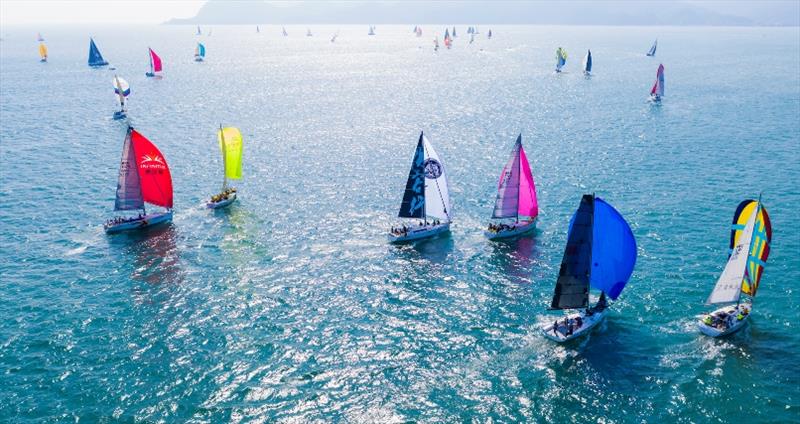 Monk says the China Cup was the biggest regatta yet for his young Chinese such as the 20-year-old Cat. “Cat’s got so much attitude, good attitude, and that’s what I’m looking for,” says the experienced Kiwi, who identifies attitude as the singlemost important ingredient. He sees a hunger for learning and progress from Cat that he believes will carry the Chinese sailor far into the sport. “Long term, the aim of our programme is to get more pro sailors into the international market, to make them a viable asset to another team in the pro sailing world.”

While Monk is focused on filling the top of the pyramid, other aspects of the China Cup are all about bringing new people into the sport simply for its enjoyment and the great qualities of self-reliance that it can inspire. The Youth One Design Class regatta created the opportunity for more than 120 children to participate in their own China Cup competition as they launched off Judiaosha Beach in Optimist and RS Feva dinghies and FarEast 23R keelboats. The goal is to introduce the next generation to the joys and challenges of competitive sailing. It’s about learning the ropes, mastering the art and science of sailboat racing at a young age, developing skills that these young sailors will carry with them for the rest of their lives.

Someone who has had a lifelong passion to grow sailing in China is Frank Pong, one of the founders of the China Cup and owner of the biggest boat in the fleet, the 75ft racing sled known as Jelik.

“Any Chinese success, like Peina Chen winning a medal at Rio 2016 in the windsurfing, the Volvo Ocean Race win by Dongfeng Racing Team in 2018, all these things develops the impetus in China,” says Pong. “But there are other things happening, more than trying to win international recognition. All the youngsters used to come from one-child families, and they were pretty much cocooned, overprotected. Now parents are bringing their children so sailing courses and they see the changes happening. The children develop into independent young people, less spoilt, I would dare to day. Sailing from the age of 8 to 12, it really gives them a grounding and understanding of what the outside world is like. I’ve seen it time and again, the children develop their independence.”

One of the highest-performing acolytes from Pong’s mentorship is Chen Jin Hao, aka “Horace”, who was racing on board Jelik during the China Cup. Horace honours Frank Pong as of the key people that mentored him into a very successful professional career at the top of the sport. He competed on board Dongfeng Racing Team in the last two Volvo Ocean Races, including winning the 2017/18 edition in the closest and most nailbiting finale in the event’s long and illustrious history.

“I have been lucky to race in the Volvo Ocean Race, in GC32s and in SailGP,” says Chen Jin Hao, “but my passion is to bring more sailors into the sport.” So the 27 year old has set up his own centre, the Chen Jin Hao Sailing Club, right in the same marina where the China Cup Race Village is situated. “We teach anyone of any age, from five years upwards, about this amazing sport. Sailing has given me so much, and I want to share it with as many people as possible.”

Sailing is fun, that much is obvious. But as Pong alluded to, the values that the sport instils in people can add up to so much more. A latecomer to sailing, Andrew Tan is a self-confessed beginner. Sailing with DEA Sailing Team in the IRC C Division, Tan comments: “What I love about sailing is the team work. If only one person does their job well, the boat won’t do well. To succeed on the race course we need the whole crew to do their best. It’s a good lesson for life.”

Anita Ng agrees. She was racing on board The Hong Kong Institute of Surveyors Sailing Team in HKPN Division A. “We are all surveyors sailing on board together. We work together and racing together is a wonderful way to get to know each other better outside of a working environment.”

For international competitors like Skip Lissiman from Western Australia, he finds the China Cup a real eye-opener. This, from someone who has seen it all in the sport, not least being part of the winning crew in that legendary victory by Australia II in the most famous of all America’s Cup finals in Newport, Rhode Island, back in 1983.

“China Cup is a great way to showcase the sport in China; it’s extremely well run, a fantastic competition with sailors from all around the world.”

At the age of 62, Lissiman’s passion for the sport remains undimmed, and he’s delighted to see yachting catching on in the biggest nation in the world. He was also pretty pleased to have finished third in the Beneteau 40.7s as skipper of Down Under Racing Team from Western Australia.

“We’ve certainly improved on last year when we were sixth. The crew made me look good, and it’s always good to get out on the water with your mates.”

In November, there are few better places to get out on the water than in Daya Bay at the China Cup. Although disappointed not to have had a shot at winning the 40.7 title this year, Laurie Jury said the Royal New Zealand Yacht Squadron’s visit to China Cup still had plenty of positives for his young team.

“Our crew learned a lot this week. I mean, racing a fleet of twenty 40-foot boats off one start line, you can’t get that kind of experience in New Zealand, so it’s been a massive opportunity for learning new skills this week.”

Next November, in 2020, will mark the 14th edition of the China Cup International Regatta, now well established as one of the most competitive and professionally organised events in Asia. Many of this year’s competitors have already signed up to make a return to Shenzhen a year from now.

You can also find out more about the regatta at the official website: chncup.com