As the boats left the dock for the fourth day of competition at the 2019 Sinebrychoff 6 Metre World Championship in Hanko, Finland, there was a palpable sense of tension and anticipation.

Ahead of the competitors lay two final races to decide the winner of the Open Division, with the leading three boats, Philippe Durr’s SUI Junior, Patrick Monteiro de Barros’s POR4 Seljm and Hugo Stenbeck’s SUI132 Sophie Racing were all holding 15 points apiece and Henrik Andersin’s FIN78 Evalina was just a single point behind them. A final show down of epic proportions was hotly anticipated!

As the boats docked out a light southerly breeze took them down to the race area where the committee was set up and ready to go for race seven of the eight race series. There was an initial slight postponement to allow the wind to settle, but then off the Open Division boats went in a steady 5-6 knots. The breeze held in for the Classic Division start and all was looking good. 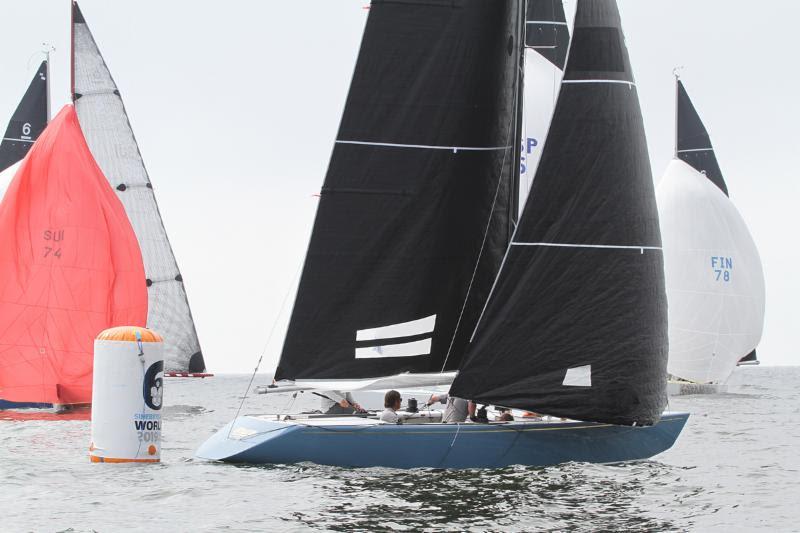 At the Open Division’s first windward mark Richard Goransson’s SWE137 Inga From Sweden VIII headed the fleet from Sophie Racing with Seljm third. Junior rounded in 11th place, but the pack was tightly bunched so it was all still to play for.

They came down the run and as they passed through the up-bound Classics fleet the wind began to drop, but with no significant current to worry about the boats were all still making reasonable progress and they were able to round the leeward gate and head back upwind behind the Classics. Seljm now led from Inga From Sweden VIII with Sophie Racing third and Junior up into tenth.

Meanwhile in the Classics His Majesty King Juan Carlos of Spain’s ESP16 Bribon Gallant was busy giving the fleet a master class in light airs sailing, carefully picking her way up the tricky first beat in impressive style. But as Bribon Gallant approached the first mark the wind began to drop and before long the entire fleet was barely ghosting along. Bribon Gallant, Louis Heckley’s FRA111 Dix Août and Eric Jespersen’s USA81 Goose were among a small group that made it around the weather mark, but others were now struggling to keep momentum. Before long everyone was becalmed.

The Race Committee held out as long as it possibly could in the hope that the wind would return, but eventually it was forced to admit defeat, abandon both fleets and call them back to the start area to await breeze. But it was a hopeless case and eventually the A over N signal flags were hoisted and the fleet sent home for the day.

The rules of the 6 Metre World Championship are very traditional in that they allow for a reserve day at the end of the regatta, which can be used if any of the races remain to be sailed. That clause has now been invoked and so the Championship will continue on Friday 9 August when it is hoped that the final two races can be completed.

One of the wonderful features of the regatta has been the excellent social programme supported by event sponsor Sinebrychoff. Despite the fact that the regatta will now continue for an extra day, the planned Sinebrychoff 6 Metre World Championship Gala Dinner went ahead as plannrd, allowing the crews to come together for a wonderful traditional formal dinner at the spectacular waterside art deco Hanko Casino. Whilst it may not have been possible to present the silverware, nothing stops the 6 Metre fleet enjoying a good party!

The forecast for Friday’s final racing day is unfortunately for further light winds. Race Officer Mikael Lindqvist and his team will be watching the forecasts extremely closely and will update the competitors on their hopes for the final races at the 09.00 competitor briefing in the morning.