The Maxi 72s, including the very latest example Hap Fauth's Bella Mente, are this year competing in the Mini Maxi Racer 1 class at the Maxi Yacht Rolex Cup

47 of the world’s largest race boats (plus another six not racing) are gathered in Porto Cervo primed for tomorrow’s start of the Maxi Yacht Rolex Cup.

This year’s event marks the 30th edition of this most famous of maxi yacht events, organised between the Yacht Club Costa Smeralda and the International Maxi Association, the World Sailing-recognised body that represents and promotes maxi boat racing globally.

As usual the maxis are gathered to compete around the craggy sandstone rocks of the La Maddalena archipelago and its notorious ‘Bomb Alley’ – one of the world’s most exceptional race areas.

This year the fleet ranges from the 42.64m long Topaz, one of two J Class yachts competing, down to the array of 60 footers.

“We love that beat up Bomb Alley – it is unique in the yachting world,” says Tom Dodson, tactician on the other J competing, Ronald de Waal’s Velsheda. “We are starting with 12 boats, including Rambler, so we have to modify our starting technique because the modern boats can accelerate and decelerate and change direction faster than we can. Surprisingly we can hang in with a lot of them upwind, because we can point higher – once we get to 10 knots we can’t go any faster, so you might as well keep pointing higher…” 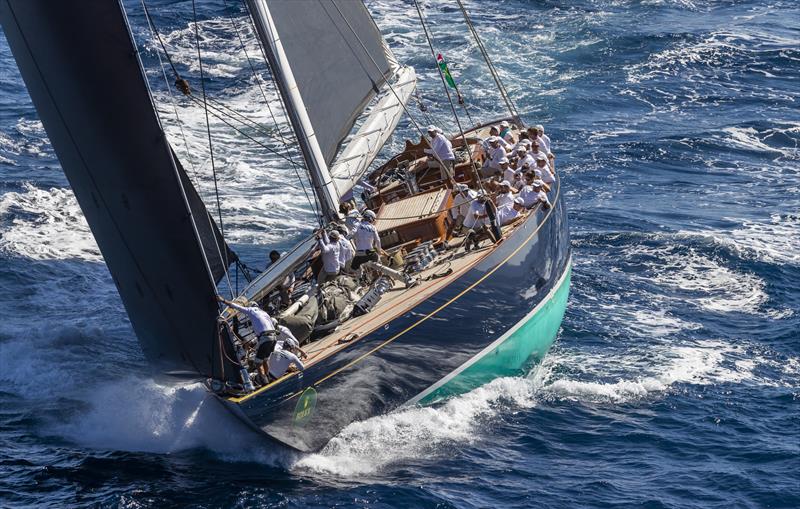 The Js are competing in the SuperMaxi class alongside Vittorio Moretti’s Maxi Dolphin 118 Viriella, but will be starting alongside the Maxi Racers and Racer/Cruisers. Among the former are Irvine Laidlaw’s Reichel Pugh 82 Highland Fling XI, the Farr 100 Leopard, being chartered to a Russian team but including many of Mike Slade’s original crew such as ex-skipper Chris Sherlock. Way of Life is the former Morning Glory maxZ86, now being campaigned by a Slovenian team, while George David’s Rambler 88 is one of the most successful maxis of all time.

“We always look forward to the Maxi Yacht Rolex Cup because you can have 20 knots down Bomb Alley and past Monaci and all the places we like to go to,” says David. Sailing on board are numerous America’s Cup legends led by tactician Brad Butterworth, a veteran of countless Costa Smeralda events: “The Maxi Yacht Rolex Cup is one of the best regattas in the worlds for round the buoys, but I really like the coastal races the best up Bomb Alley, because it is such as fantastic place to sail.” 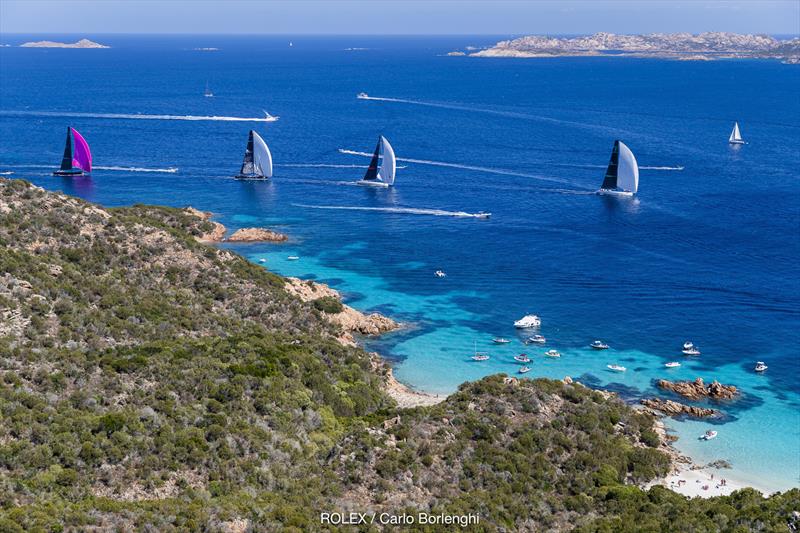 The Maxi Racer/Cruiser class includes the Southern Wind 90 Allsmoke, the Swans 90 and 100 Nefertiti and Varsovie and the Wally 100 Gibian. However favourite will be Argentinean Miguel Galuccio’s Reichel/Pugh 83 Vera, which this year has already scored line honours/overall ‘double’ wins in the 151 Miglia Trofeo Cetilar and the Palermo-Montecarlo. “The Maxi Yacht Rolex Cup is completely different,” says Galuccio comparing it with the offshore event. “But I look forward to it. I am going with the family and friends.” Vera is the former My Song, and Galuccio has invited her original owner Pier Luigi Loro Piana on board this week, because as Galuccio puts it “he lost his baby” (he refers to the loss of Loro Piana’s Baltic 130). 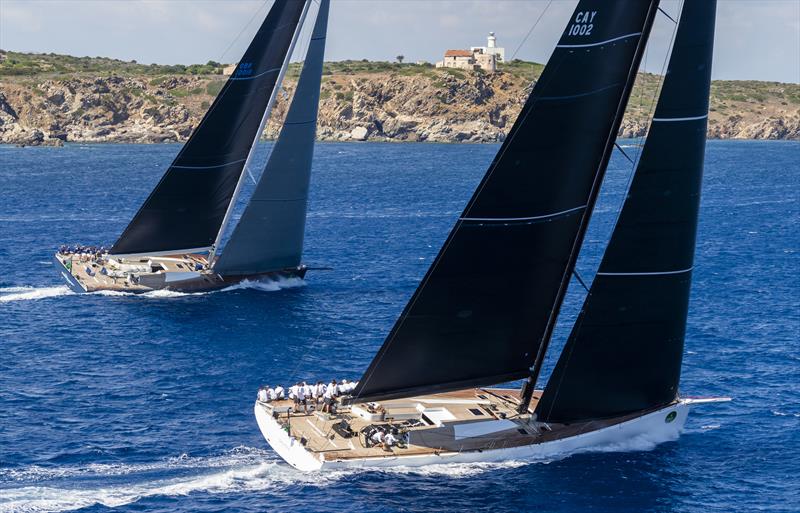 Among the Wallys the heavyweight battle will again be between the Wallycentos Galateia of David M Leuschen and Sir Lindsay Owen Jones’ Magic Carpet Cubed. As usual in the Magic Carpet Cubed afterguard is North Technology Group’s President and CEO Tom Whidden, who has sailed in more than twenty Maxi Yacht Rolex Cups, originally on the IOR maxis Kialoa and Boomerang: “Obviously the boats have changed a lot, but the regatta is very much the same. The organisation is fantastic as are the social events. The sailing is spectacular, as good as it gets. Sailing up in the islands – there’s nothing better in the world.”

However in the Wally class they will be up against Claus-Peter Offen’s Wally 100 Y3K, plus the smaller and hotly competitive Wally 80, Jean-Charles Decaux’s J One and defending champion Lyra of Chinese-Canadian Terry Hui. 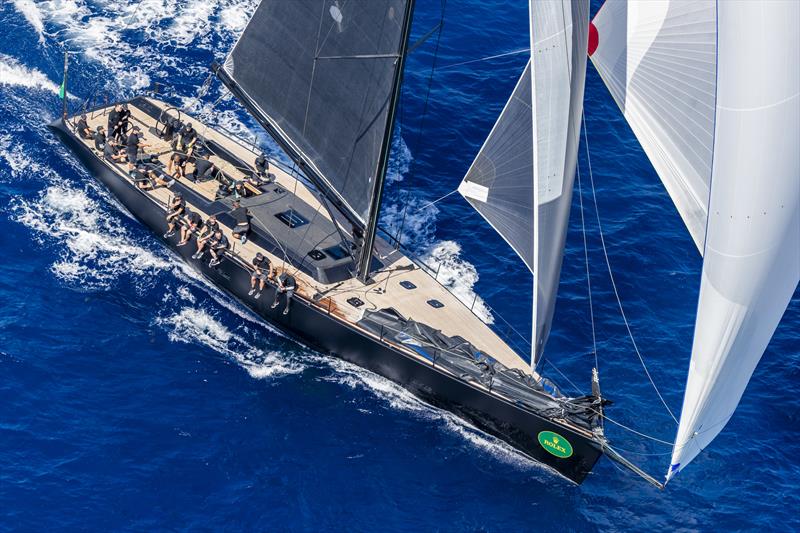 “I like Porto Cervo a lot,” says Harrison. “The racing is amongst the best – especially up through Bomb Alley it is fantastic.” 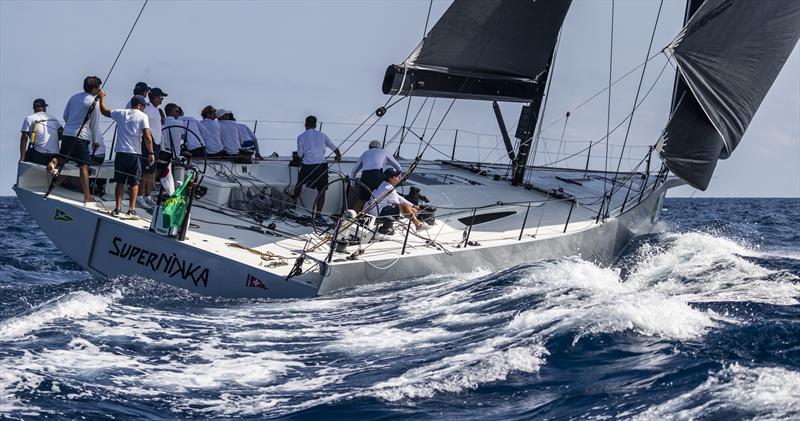 Another competitive class will be Mini Maxi Racer/Cruisers. Longest and highest rated under IRC here are the Nauta 78 Arctic Energy of Sergey Egorov and Aldo Parisotto’s heavily campaigned Mylius 65 FD Oscar 3. But the winners are likely to be among the competitive 60 footers, Vincenzo Addessi’s Mylius 60 Fra Diavolo and especially the trio of Swan 601s – Stephan Cucchiaro’s Flow, Gerard Logel’s @robas and Jean-Pierre Barjon’s Lorina 1895 – and the Wally 60 Wallyño of Benoît de Froidmont.

“Between the YCCS and the IMA we are very happy with the large participation this year,” says de Froidmont, also President of the International Maxi Association. “It shows how competitive the fleet is in the Med. This year the Mini Maxi is the biggest class and its range is wide which makes the class splits very complicated because you have brand new 78ft long racer-cruisers and also classic 50 year old Swans. Fortunately the class splits based on the IMA formula make it better balanced.”

The largest class competing with 13 entries is the Mini Maxi Cruiser/Racer. This spans Anthony Ball’ Swan 65 Six Jaguar, the lowest rated boat to the fastest, the smart brand new Ceccarelli-designed Grand Soleil 80 Custom Essentia of Romanian Catalin Trandafir. This will be Trandafir’s first Maxi Yacht Rolex Cup and his boat’s first ever regatta, although he has competed extensively on his previous Grand Soleil 58. “The Maxi Yacht Rolex Cup is really nice. Almost all of the famous boats are here,” says Trandafir, advising that they will be treating the event more as a sea trial. “The sails only arrived three days ago…” 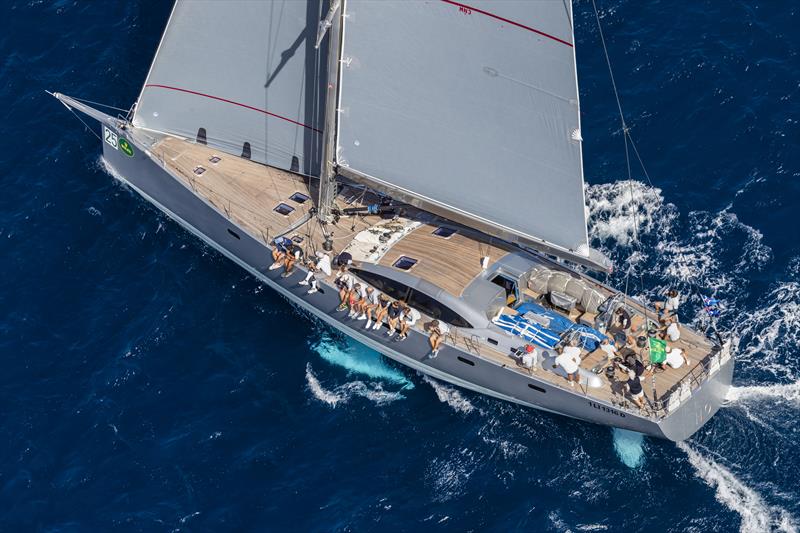 Racing takes place from midday daily from Monday until Saturday with a scheduled layday on Thursday. The Supermaxis and Maxis will race coastal courses exclusively while one day of Mini Maxi Racer/Cruisers competition will be on windward-leewards and two days for the Wally and Mini Maxi Racer classes.

Find out more about the event here.