Under grey skies on the Bay of La Baule, at the mouth of the Loire river in the west of France, Morgan Lagraviere (Voile d’engagement) lead an early breakaway trio at the head of the 47-strong La Solitaire URGO Le Figaro fleet during a showcase first hour of the 553 nautical mile, three day first stage across the Celtic Sea to Kinsale, Ireland.

Lagraviere, who has twice finished on the overall podium for the Solitaire, the annual multi-stage solo classic offshore series, and sailed on the 2016 Vendée Globe in the colours of Safran, races this 50th edition of La Solitaire URGO Le Figaro with no major sponsor.

He sailed smartly on the first two-mile sprint leg to round the first mark and forge a small escape accompanied by Gildas Mahé (Breizh Cola) and Adrien Hardy (Sans Nature Pas de Future) who also competes without a major partner. 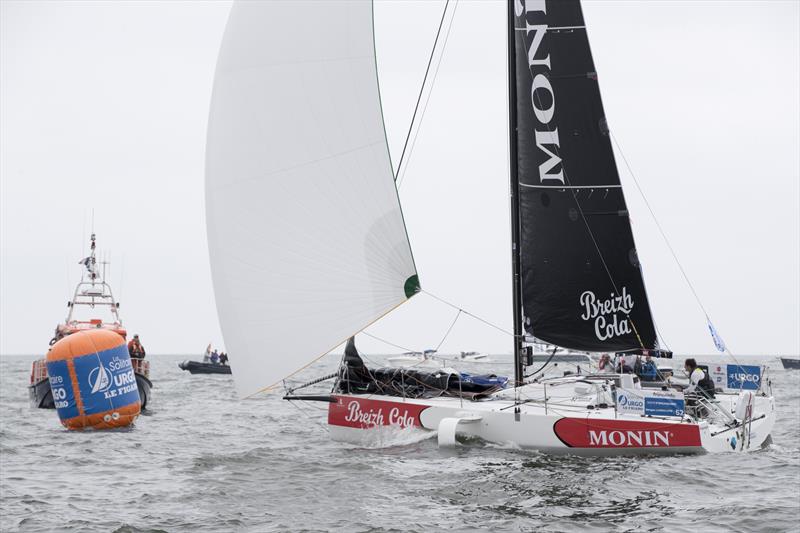 Thousands of spectators lined headlands, seawalls and beaches around fashionable Pornichet and the bay itself to watch the 11 mile opening circuit unfold in 10-13knots of south-westerly wind, seeking their first glimpse of the new foil assisted Figaro Bénéteau 3s in full La Solitaire race mode and some of France’s best known, most successful offshore sailors going head to head. 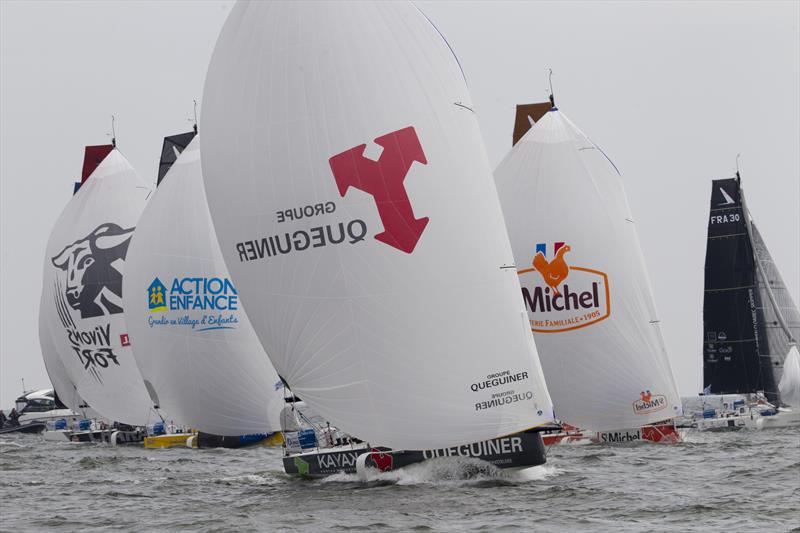 Britain’s Alan Roberts (Seacat Services) was in the middle of a big pack of boats in 19th at the first ranking mark.

But while the opening skirmish under gennakers gybing around the bay was the perfect start to what promises to be the most competitive Solitaire for many years, there are many challenges in store, even during the first night at sea.

Initially a rich-get-richer scenario is anticipated favouring the leaders, but a messy, not too active cold front is due to pass over the fleet just after dusk. The winds are expected to be unsettled, changing in direction and strength with some light rain on the first 57-mile stage down the Vendée coast to the Bourgenay southernmost turning mark, set by design off the home town of the boats’ builders Bénéteau. 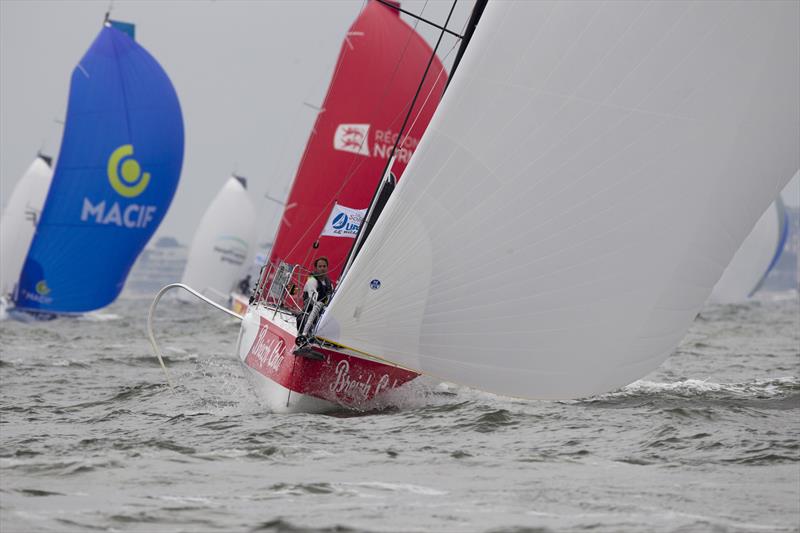 The key stages after that mark are entering the strong tides of the Raz de Sein, passing the Traffic Separation System off Ushant off the western tip of Brittany the Scilly Isles, the approach to the Fastnet and the final 50 miles in to Kinsale which looks set to be light.

Well placed mid fleet was Will Harris, (Hive Energy). As a Brit he is largely unique in the field as an overseas, non-French racer who is taking on only his second La Solitaire URGO Le Figaro. But after winning the top rookie or ‘bizuth’ prize on the 2016 La Solitaire, the 25-year sailor from Weybridge in Surrey, England has managed to secure the support of an English based leading solar energy company.

Harris said as he left the dock in Nantes: “The weather is not as simple as we might have hoped it would be tonight, there are a lot of weak and broken up fronts coming through. At Ushant there will be another front which will bring quite a bit more breeze and it will be quite challenging to get through the rocky passage there and then the exclusion zone. Day 3 is less clear with a low pressure over the UK which, depending how and when that develops, can make 180 degrees of difference to the wind as we approach the Fastnet and Kinsale. But I feel like I have a good feel for what is expected to happen, I know what to look for and what to rely on.”

Harris continued: “I am really excited to be starting. I want to go out and enjoy it. This first leg is about managing risk and not splitting away on what promises to be a very open leg. That can be your Solitaire over. Look for the small gains and coming in to Kinsale can be interesting.” 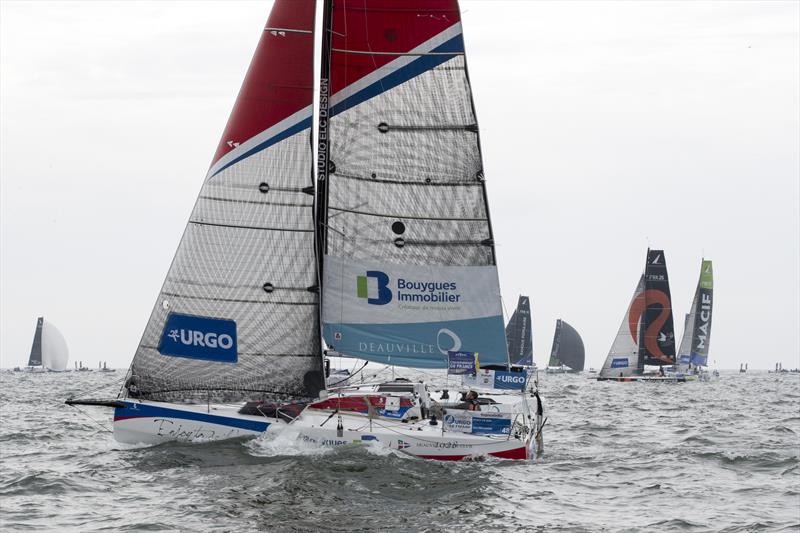 The adoption of the new boat sees the return to the 50th Solitaire of three legendary French sailors all in their 50s, set to rekindle a friendship and rivalry which dates back more than 30 years.

As the fleet left the Bay of La Baule, all three musketeers were placed in the top 12. Racing in his home waters today, in front of his house, Route du Rhum-Destination Guadeloupe winner and three times winner of The Transat, Loïck Peyron at 59 is back as the oldest participant in a race on which he was the youngest in 1980 and won a leg in 1986.

Michel Desjoyeaux, 54, is the most successful of the ‘roaring 50s’ with three overall Solitaire wins under his belt 1992, 1998, 2007. After a five year break this will be Desjoyaux’s 13th Solitaire and he has never finished worse than twelfth and he can recite his year by year finishes by rote. Other than that 12th and seventh in 2013, he has always finished in the top five. He remains the only sailor ever to win the Vendée Globe three times.

“I was there for the introduction of the Figaro 1 one design and the Figaro 2 and so it is natural I am here for the new Figaro 3. I knew last year I would be here,” Desjoyeaux has told the French media several times.

“I have nothing to prove on this race. I won’t say I have to be in the top 5. I am here to enjoy myself, for my satisfaction. There is no pressure,” he contends.

Leaving Nantes this morning Desjoyeaux commented on the leg ahead: “There will be a lot of shifts in the wind, it will be quite unsettled with a lot of manoeuvring and trimming, and then the leg itself is a big job. There are so many different options through the islands and round the TSS. It is really about finding the solution which is not the worst, I don’t think there is one best solution.

“That is the goal for this leg. And it is a pleasure to be heading to Kinsale, it is a lovely place and a nice finish. It is a fun boat, although not so much on this leg which will be mostly upwind. My objective here is to try not to be too bad and to be better than I have been in the first races with the boat this year. I am starting to learn the boat and I am starting to get back into this racing programme but I will do the best I can.” 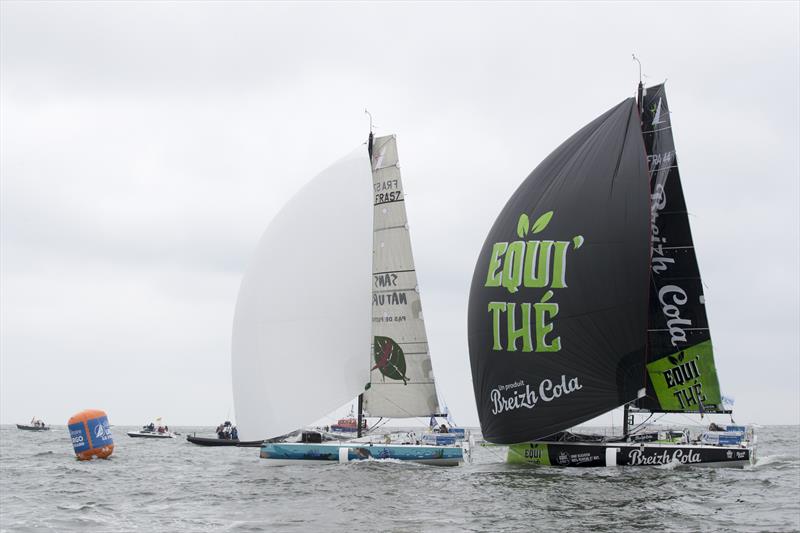 And Alain Gautier, 57, is back on his 18th La Solitaire after racing twice in 2015 and 2014 when he finished 18th and 20th after a ten-year break. Gautier, who scored his first ever leg win into Kinsale in 1987, winning overall in 1989, has named his boat ‘merci pour ces trente ans’ (thanks for the thirty years) – a double edged acknowledgement to sponsors who have supported him over the years and to rival chums Peyron and Desjoyeaux who he calls ‘les enfoirés’ (literally these ‘tossers or assholes’ but veiled as a reference to 1980s French pop collective of that name).

At 553 nautical miles this first leg is the longest yet to be sailed in the new Figaro Bénéteau 3s and the gaps through the fleet are expected to become quite large on this, the most open stage of the four legs which comprise this long awaited 50th edition.

Find out more at www.lasolitaire-urgo.com