One of the biggest ‘door closing on those behind’ moments in offshore sailing occurred on Thursday night and through the next 24 hours for competitors racing in the special 10th anniversary edition of the 151 Miglia-Trofeo Cetilar, between Livorno and Punta Ala, Italy.

The 151 Miglia-Trofeo Cetilar is organised by Yacht Club Punta Ala, Yacht Club Livorno and Yacht Club Repubblica Marinara di Pisa, in collaboration with Marina di Punta Ala, Marina di Pisa and the International Maxi Association (IMA). It is also the third event of the 2018-19 IMA Mediterranean Maxi Offshore Challenge (MMOC).

The record-sized fleet of 220, in what has become the Mediterranean’s largest offshore race, left Livorno in around 10-12 knots at 1600 on Thursday, but that night parked at the Giraglia Rock, off northeast Corsica. First to arrive at around dusk, Rambler 88 saw her lead evaporate as the fleet compressed. The American maxi had to carry out almost a complete lap of Giraglia before escaping its clutches at around 2230. The Reichel-Pugh 86 Vera (ex-My Song) followed half an hour behind.

Significantly Rambler 88 achieved not only line honours but set a new race record, with an elapsed time of 13 hours, 50 minutes and 43 seconds, 1 hour and 40 minute less than the previous record set in 2018 by Nicola Paoleschi’s Davidson 69 Pendragon VI.

Of the 151 Miglia-Trofeo Cetilar, Rambler 88’s owner George David commented: “It was a good race and we even had breeze rounding Giraglia when the wind was quite light 3-5 knots – but at least we avoided the shutdown that afflicted all the other boats – except VERA – behind us. I am very happy with this first result of our Mediterranean sailing season.” 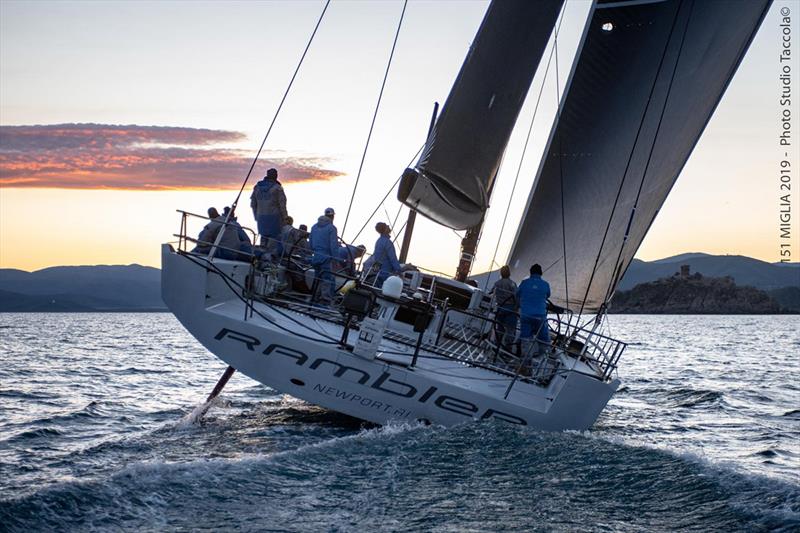 His tactician, Kiwi America’s Cup legend Brad Butterworth, confirmed that key was escaping Giraglia: “There was some leakage off Corsica, so we were beating in very light air, like two knots, and managed to get around the other side of Giraglia before getting back on course in the old breeze.”

Rambler 88 has set countless course records in her career, but Butterworth says this is her slowest, “but that is what happens in the Mediterranean. Night comes and usually the wind disappears. At Giraglia I thought ‘we are going to be here for the night…'”

Sadly for the American team, they were unable to clinch ‘the triple’, with corrected time victory in the maxi class going to the 2 hours 10 minutes faster Vera.

Vera’s crew included several A-listers like Volvo Ocean Race veteran Bouwe Bekking and Norwegian navigator Aksel Magdahl. “We had a good plan and executed it well,” explained Bekking. “We all parked up at the Giraglia Rock for something like one and a half hours. We could hear Wild Joe. We were really aggressive, sometimes pointing <100 degrees from the course to get back into the old breeze. We wiggled ourselves through nicely.”

According to Bekking the most wind they saw was 15 knots rounding Formiche di Grosseto.

Such double digit wind speeds were unimaginable for the other 218 competitors in the 151 Miglia-Trofeo Cetilar, even for the 13 other maxis in the IRC > 60 maxi class behind them. For after Rambler 88 and Vera had departed Giraglia, the door closed firmly shut behind them.

The maxis behind rounded Giraglia and then found themselves stuck in a hole to the southeast. To escape, some, such as Roberto Lacorte’s SuperNikka and Twin Soul B, tried turning north (like the leaders). Applying this tactic at around 0100 SuperNikka was first of this group to turn her bow back on course. Worse was to befall some, such as Magic Rocket ITAS Assicurazioni, that erred too far north only to be becalmed again. Meanwhile in the early hours those who had chosen the apparently windless rhumb line, found the breeze eventually filling in – especially beneficial for Pendragon VI and Oscar3, who overhauled SuperNikka.

By the time Rambler 88 was rounding Formiche di Grosseto just before 0400, Oscar 3, leader of the second group was still only 15 miles away from Giraglia, having dived south of rhumb line (as on the opposite side of the race track SuperNikka was going north again).

South of Elba, Oscar3 lost out following a similar offshore route to the leaders and was overhauled at around 0900 first by SuperNikka, then Pendragon VI, Wild Joe and SuperNikka’s sistership Yoru, all of whom had chosen to short tack along the Elba shore. They too then fell into a hole, while still close in to the shore SuperNikka was able to escape, eeking out a 45 or so minute advantage over Pendragon VI and Twin Soul B that she was able to hold to the finish. This caused SuperNikka to come home third overall on IRC corrected time in the maxi fleet, albeit some 7.5 hours slower than the winner’s time.

“It was a very complicated regatta for boat and crew, with the central part of the race very frustrating,” admitted SuperNikka’s skipper Roberto Lacorte, whose company sponsored the event. “We reached Giraglia third with just Rambler and Vera in front of us. There our tactic was to go left, looking for the northeasterly, which Rambler got, as did Vera, but SuperNikka….she did not. We stopped for five hours. I’ve never parked up in a yacht race for such a long time. It was very frustrating for my crew, but they never gave up and sailed the rest of the race well, with a particularly superb passage past Elba.”

Owners of the top four maxis – Vera, Rambler 88, SuperNikka and Yoru – are all members of the International Maxi Association.

The 151 Miglia-Trofeo Cetilar concluded with the event’s famous ‘dinner party’ extravaganza, hosted in the grounds of the Yacht Club Punta Ala overlooking the race course.

See the race tracking here and full results from the IRC Over 60 maxi class here.