After a windless start to the day for the Swallow National Championships, a reasonable SSWesterly F3 breeze set in to provide racing in champagne conditions for nine Redwings and three One Designs on Saturday afternoon.

The race area off Bembridge was the busiest it has been for quite some time with Swallows, the Redwings and One-Designs and a group of Westerly Centaurs (part of the Bembridge Rally celebrating their 50 year anniversary) all competing for space.

Once communication had been estblished on VHF Ch 77, all three groups settled into their strides, albeit the keelboats two short races were perhaps a bit lacking in interest due to the lack of race space. Race 1 was two laps for each class starting at Janson with a beat inshore to the Under Tyne mark.

Some wind shifts closer to the shore gave the helms something to think about on the upwind legs but otherwise the breeze was reasonably constant in strength and direction. Joe Robertson in Red Gauntlet II had a good start and maintained his position at the front of the fleet in close contention with Peter Grimaldi in Redwing which kept her nose ahead just enough to beat Red Gauntlet II to the finish line by a few seconds. Michael Macinnes in Avocet and Jonathan Nainby-Luxmoore in Snow Goose were in the front pack throughout and moved up a couple of places to finish third and fourth respectively.

In the One-Designs Hugh Doherty in No 10 was soon in the lead and there were no place changes with Anna Row in No 8 and William Bland in No 12 finishing in that order.

For race 2 the wind stayed SSWest with up to 11 knots at times. The Redwing front pack kept to a tight formation rounding marks in close contention with Red Gauntlet II and Snow Goose jockeying for the lead with Quintessence, Redwing, Rosetta and Avocet all close in the second group. The final leg from Janson to Under Tyne gave the fleet another good beat with Joe in Red Gauntlet II coming home first 30 seconds ahead of Jonathan in Snow Goose with James Tate in Rosetta 4 only 8 seconds later and Michael in Avocet very close behind to claim fourth place.

In the One Designs, Anna got ahead in No 8 and stayed there keeping Hugh in No 10 under a minute behind with William in No 12 closing in at third. All in all, a fun afternoon’s racing, not least because waterproofs were not necessary in the glorious sunshine and pleasant breeze. 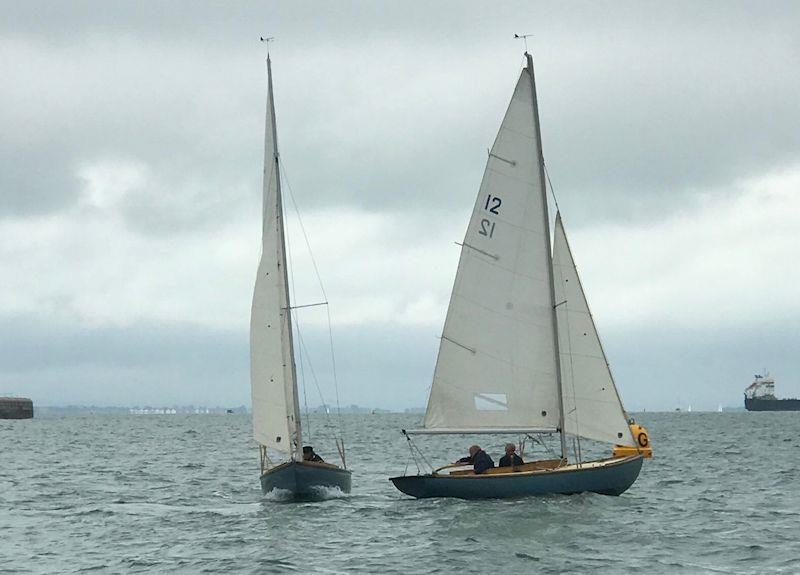 What a difference 24 hours makes! Sadly conditions on Sunday afternoon were not nearly so nice and although most of the drizzle had come through by the time racing started, it was still dull & overcast with a Force 3 easterly. Having agreed to only have one race, rather than the two that were programmed, the start line for both classes was at Garland and the course was kept inshore to keep clear of the Swallows who were just finishing off their Championships. The windward mark was Under Tyne and the leeward one was Old Church, three times round for the nine Redwings racing and twice for the two One-Designs.

The Redwings that stayed inshore took advantage of the tide that was heading from Garland towards the Lifeboat Station and Colin in No 11, Toucan, finished well ahead of the others after the course was shortened to two rounds. Joe Robertson in Red Gauntlet II was second (and therefore won the weekend’s Fortuna II – 1950 Medal) and Rory Morrison in Skua was third. In the One-Design race, shortened to just one round, Hugh Doherty in No 10 won with William Bland in No 12 not far behind. 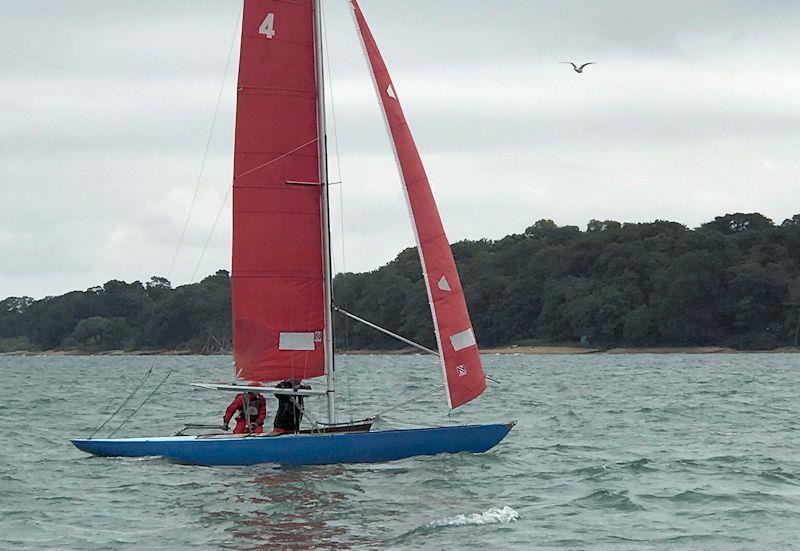