Action stations on board Mariette of 1915 © Blue Passion / ISA

Capri Classica ~ Mega-schooner match race on the Bay of Naples

Out on a sunny but chilly Bay of Naples, there was a remarkably action-packed opening day of racing at the inaugural Capri Classica, with lead changes galore, a David v Goliath competition and an encounter with a Neapolitan fishing net best forgotten.

Racing today got under way at 1300, an hour late as the race committee waited for the wind to settle off the north side of the Sorrento Peninsula. Eventually the four schooners cautiously set off with the smallest, the 85ft Orianda, first to tack at the heavily favoured committee boat end of the line.

However it was the heavyweight bout between the 138ft Herreshoff-designed Mariette of 1915 and the 128ft Naema that was most engaging. The two titans of Capri Classica were at each other’s throats from the outset in a match race reminiscent of a 19th century America’s Cup when schooners were the vessels of choice.

Mariette of 1915 leads Naema back into the Gulf of Naples. – photo © Blue Passion / ISA

First Mariette of 1915 gaining the upper hand through superior pointing ability to lead around the first mark to the south of Punta Campanella. They then returned to the Gulf of Naples where Naema was able to roll her rival and pulled ahead down the tricky run down past Sorrento. However approaching the leeward turning mark beyond Sorrento the wind filled in from astern allowing Mariette of 1915 to close as she brought the breeze down with her. A handling error coming into the mark as gusts of 15+ knots descended on the race course, left Naema bare-headed for a minute, a loss that was Mariette of 1915’s gain, allowing the navy blue schooner to sneak through.

“Then there was a moment where we had to make a decision do we follow them or do we do something different?” recounted Florian Franke, Captain of Naema. In the event Mariette of 1915 continued out into the Bay of Naples on port, as, now behind, Naema tacked on to starboard heading back into the Sorrento Peninsula. This proved to be a winning move as Franke explained: “It was very shifty. The first tack we gained with a lot of lift. Then we got into pressure between the mainland and Capri as they went offshore and got a big header. I was surprised they didn’t tack back earlier – maybe they thought there was more wind coming.” Blessed by angels, Naema regained the lead for a second time, lifted enough that she was able to point directly at what would be the finish line of the shortened course, as Mariette of 1915 struggled with her bow at one point pointing towards Naples.

As Naema’s helmsman Hank Halsted said, beaming: “Luck is good food you just need to know when to take it…” 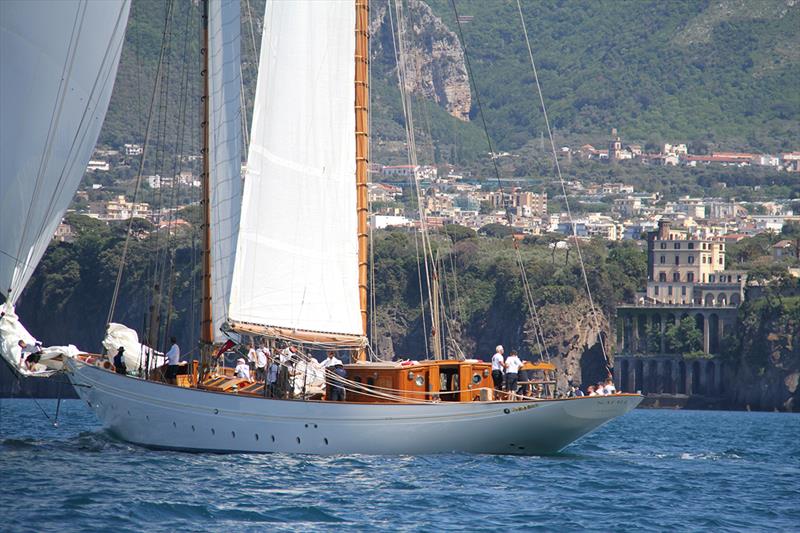 Behind, Puritan and Orianda were having a race that was slightly too close considering the relative differences in their 126 and 85ft LOAs. It was discovered the cause was that Puritan had picked up a metal fishing net that had wrapped itself around her drop keel. Certainly it made Orianda’s performance look impressive.

Orianda’s captain Sebastiano Marulli d’Ascoli was pleased with their race, especially as being a Neapolitan he is competing on home waters this week. However in schooner racing he maintains this made little difference: “We knew that under Sorrento it would be changing, but the speed on Orianda doesn’t change that much. It’s still 8.5 knots…”

Even though the wind dropped off on the final upwind towards the finish line, they still managed to finish within the time limit despite their relatively diminutive size: “We had some moments of five to six knots and we also had 15-17 knots and it was gusty off Sorrento which was nice, going downwind with the wind. We were doing 8.5 knots which was good for Orianda as she is not a racing boat. It was a very long day, but everyone on board is happy,” said d’Ascoli.

As to racing at this inaugural classic schooner-exclusive Capri Classica, d’Ascoli added: “The event is amazing. We are the smallest so racing with these other schooners is incredible, really an honour.”

There is much anticipation for racing on day two tomorrow when the wind is forecast to be 15-18 knots.

For more information on the International Schooner Association visit www.internationalschoonerassociation.com