One of the premier racing and cruising regattas in the South Pacific, nearly 70 yachts representing over 20 countries on six different continents have thus far registered, with more yachts pouring in around the clock ahead of Saturday’s first sailing event.

Comprising six days of parties, yacht racing, seminars, a marine swap meet and more, the Fiji Regatta Week is a unique and fun-filled affair that has become a mainstay on the calendar of many world cruisers and keen sailors in the region.

Typically, the Port Opua Hobie Cat Challenge is one the most popular sailing events of the regatta. Close to two dozen teams, consisting of two sailors each, will face off in a single-elimination match racing format held right over the reef, at high tide, at Musket Cove.

Taking place on Sunday, Monday and Tuesday, the event attracts cruising sailors, locals and hardcore racers alike, and takes place in a perfect stadium-racing setting held adjacent to the world-famous Island Bar at Musket Cove. Last year’s event saw big breeze and some notable capsizes, while this year’s event could see lighter winds during the first two days of Hobie Cat racing before stronger southeast trades are forecast to fill in for Tuesday’s final. 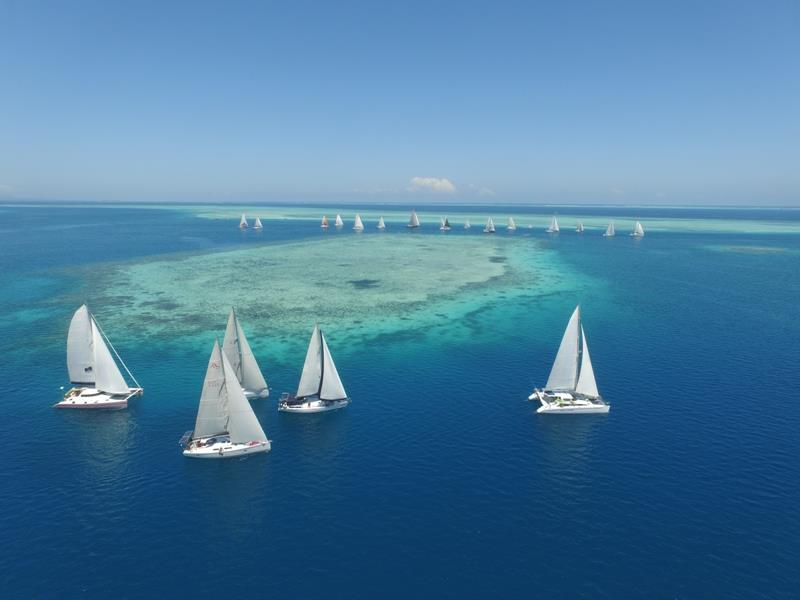 Also taking place on Tuesday is the Bay of Islands Boatyard Sandbank Race which kicks off the racing for the big boats, the majority of which have sailed in from overseas. Typically sailing upwind towards a mark set near Namotu Island before rumbling back down hill and finishing up with a party at Musket Cove’s famous sand bank, the event is always a favorite among the fleet.

The crown jewel of the Fiji Regatta Week however is the ‘Round Malolo Classic, sponsored by Marsden Cove Marina and Fiji Water. Consisting of a race around Malolo and Malolo Lailai islands, the race records are seemingly always under threat as the boats entered continue to get faster with nearly each passing year. Both multihull and monohull course records were set in 2017, and currently stand at one hour 15 minutes and 45 seconds for the multihulls and one hour 39 minutes and 30 seconds for the monohulls.

In addition to both monohull and multihull divisions, 2019 will see the inauguration of a new class in the ‘Round Malolo Classic; kiteboards. As foiling and kiting have continued to gain traction both regionally and internationally, there has been increased interest in a foiling kiteboard division. Weather conditions will certainly dictate how many kites show up on race day, but this will certainly be one to watch.

Notable entries include the German-flagged Finot-Conq designed all-carbon FC3 53 Nika; a proper water-ballasted, twin-rudder, swing-keel monohull ocean racer with a big square-top mainsail that is capable of more than 25 knots of boat speed when sailed downwind in a breeze, yet capable of being cruised by just two sailors. To be first around the race course, she’ll have to overcome a formidable challenge in the form of the ultra-quick Kiwi-flagged 21-meter racing-sled-turned-cruiser NV, who has only just recently arrived into Musket Cove and represents a true dark horse.

On the multihull side of things, the Australian-flagged Schionning catamaran Roam will also have her work cut out for her against a big, fast Gunboat and a super quick locally owned, custom built ultra high-performance cruising catamaran. As this article goes to press, details on some of the fleet’s heavy hitters are quite noticeably sparse, though we intend to do some digging and learn a lot more about the yachts that will occupy the pointy end of the fleet before race day on Tuesday and Wednesday’s main events.

After a week of predominantly light winds that created world-class surfing conditions at nearby surfing breaks such as Cloudbreak and Restaurants – not to mention fantastic diving conditions – the venerable southeast trades have again returned to western Fiji and are pumping in at close to 20 knots.

A complex, split-high scenario south of Fiji with a small low-pressure system forecast to form in between the highs will interrupt the normal trades and likely create lighter, more variable conditions for the first two days of the Port Opua Hobie Cat Challenge on Sunday and Monday. By Tuesday’s Hobie Cat final and Bay of Islands Sandbank Race, the trades should again fill in and stick around until at least Wednesday’s Marsden Cove Marina ‘Round Malolo Classic.