A crisp 10-15 knot nor’ easter met the 32 competitors at the start of this year’s Flinders Islet Race – the second of the Cruising Yacht Club of Australia’s Audi Centre Sydney Blue Water Pointscore Series.

Setting off from Point Piper and strategically tacking up Sydney Harbour, teams pounded around South Head in bumpy conditions before setting spinnakers and making for Flinders Islet some 46 nautical miles south-west.

David Griffith and Rupert Henry’s JV62 Chinese Whisper were able to make the most of the tactical start, clearing Sydney Harbour well ahead of closest rival David Gotze’s RP63 No Limit. But it was TP52 Zen, owned by Gordon Ketelbey, who really shone at the start, also managing to beat-out the larger No Limit before they made open water. 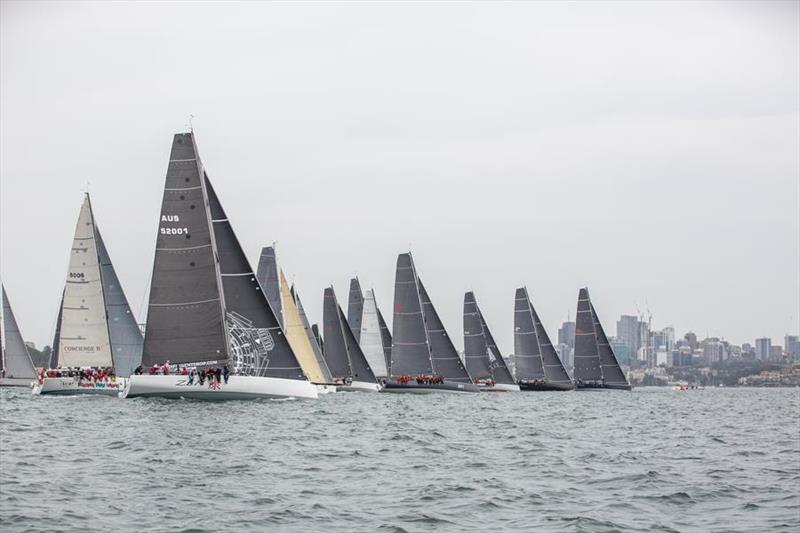 The five remaining TP52s, Ichi Ban, Gweilo, Koa, Celestial and Quest made up the rest of the front-runners, closely followed by Cookson 50 About Time and Rogers 46 Smuggler.

“it’s going to be a great downwind sail to Flinders Islet. Coming back will be a different story though!” said Smuggler crew India Howard.

A strong fleet of five teams aboard the offshore-experienced Sydney class, as well as eight ocean-racing stalwart Beneteau Firsts, are now hunkering down for their own battles within these competitive classes – while also keeping their eyes firmly locked on the overall win prize.

After rounding Flinders Islet off Wollongong, teams will beat north-east making for the finish line in Sydney Harbour, ever mindful of conventionally-ballasted race record set by competitor Koa in 2017.

Flinders Islet Race teams can be followed live via the yacht tracker on the dedicated Audi Centre Sydney Blue Water Pointscore Series website. Photo and video will also be shared across the Cruising Yacht Club of Australia’s socials including Facebook, Instagram and Twitter and you can keep up with the conversation by using and following #AudiCentreSydneyBWPS.

After what could almost be described as a typical Sydney Harbour start (minus the grey sky!), the 2019 Flinders Islet Race unfolded to be anything but. Close, choppy swells averaging nearly two metres in height, combined with the building northerly breeze, created testing conditions.

“It was a fantastic run down to Flinders Islet, we were sitting on 18-21 knots most of the way, which for these bigger boats, suits them perfectly. It was just great, the TP52s are a bit of a challenge for us downwind, but once we get upwind again we grind away from them.” said Chinese Whisper owner/skipper David Griffith.

“Chinese Whisper is an amazing boat upwind, its just a perfectly balanced boat and we had a great crew on board with no mistakes. They just did everything solidly which helped a lot.” 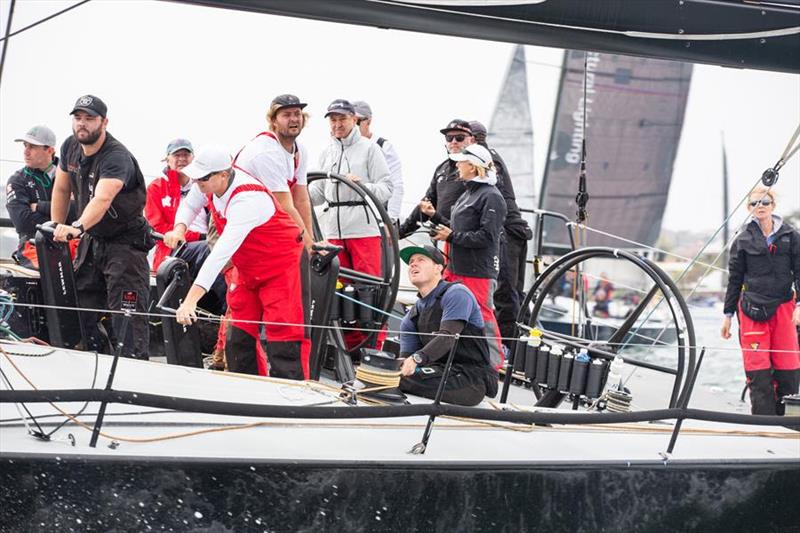 David Griffiths at the helm of Chinese Whisper as the team prepare for the race start. – photo © Hamish Hardy, CYCA Media

The line honours battle however was not won or lost in the water off the coast with both No Limit and Chinese Whisper entering Sydney Harbour within touching distance of each other. This set up one final sprint to the finish line in Rushcutters Bay under the cover of darkness.

“It was a great finish for us. I feel a bit sorry for the boys on No Limit who sailed extremely well but you know, that was the challenge. We were biting their heels all the way up the coast back from Flinders Islet. It wasn’t until we were coming down the harbour that we were able to nail them in different sailing conditions,” said Griffith.

“They were trying to block us but we were in a controlling position, able to break gybes and seperate from them. They went over to the eastern side and we stuck more on the western shore which proved to be the winning move.

“The race for the two of us started again at south head with the finish in Rushcutters Bay. We had great fun sailing against them with only 47 second between them as we crossed the line.”

Five TP52s, led by Matt Allen AM’s Ichi Ban, were next to finish, all crossing the line within 25 minutes of each other and also just 11 minutes off Chinese Whispers line-honours-winning time.

From the quality of the competition among the faster-end of the fleet, as well as the battles that unfold for the overall win, it’s easy to see why the Audi Centre Sydney Blue Water Pointscore Series is described as the pinnacle series of offshore racing in Australia

Flinders Islet Race teams can be followed live via the yacht tracker on the dedicated Audi Centre Sydney Blue Water Pointscore Series website. For more information visit Cruising Yacht Club of Australia’s socials including Facebook, Instagram and Twitter and you can keep up with the conversation by using and following #AudiCentreSydneyBWPS.