Flirtation Skippered Matt Crawford, and crewed by Robert Crawford, Luck Shephard and Karl Broomfield. Currently in sixth place, but with their continued improvement could be in the mix. © Alex McKinnon

The first day of racing in the 2019 Garmin International Etchells Class NSW State Championship was a very even affair.

With a forecast of light easterly winds today, and even lighter breezes tomorrow, the Principle Race Officer, Peter Walsh, was keen to get at least three races in for the day.

Despite the large number of Etchells regattas held during this sailing season, including a World Championship late last year, Gosford Sailing Club the host for this particular event, was able to attract 29 entries. The fleet even comprised of one entry from Hong Kong, Madness, which is skippered by Charlie Manzoni, and crewed by Tiger Mok, and Peter Austin. There are also two crews from Victoria, which are Magpie and Tango.

The first race got underway on time at 1200hrs, with only one boat over the line. They subsequently returned, and then re-joined the rest of the fleet. Course Two (leeward finish) was selected with the top mark set on an axis of 065 degrees in around eight knots of breeze. Great White Hunter skippered by David Dunn, with his crew Andrew Howe, and Jan Sholten took out the first race. Top 40 skippered by Billy Merrington was second and 1435, skippered by Jeanne-Claude Strong was third. Racing was very close with all of the boats finishing within eight minutes of the leader.

The breeze was still around eight knots, but had shifted a little left for the second race, so an axis of 050 degrees was set. Just the one boat was over the line for this start, as well, but returned and recommenced. By the time the boats had reached the leeward mark, the wind had shifted again, and the course was changed to an axis of 055. 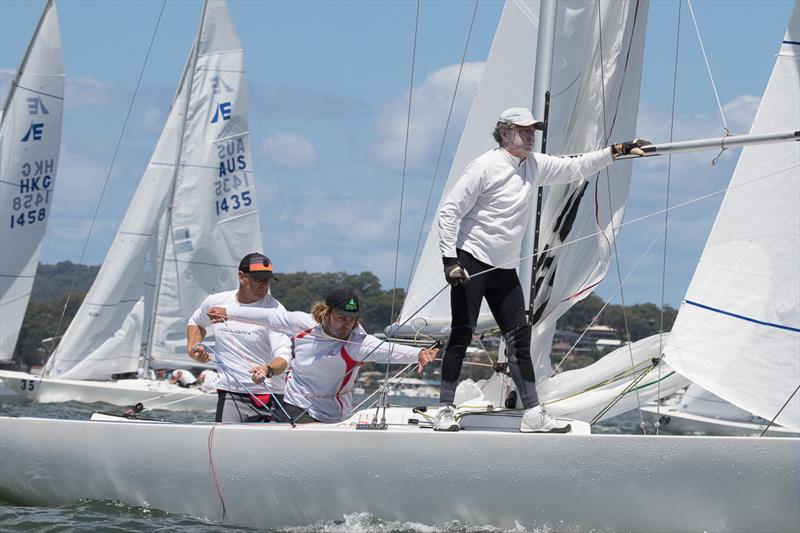 Top 40 Skippered by Billy Merrington with the crew Ian McKillop, Geoff Bonouvrie have a good day currently leading the regatta after the first day of racing. – photo © Alex McKinnon

Racing was even closer in this race with all of the fleet finishing within four minutes of the leader. This time the race was won by Wobbegong 2, which is skippered by Doug Flynn and his crew of Steve McConaghy, and Andrew Smith. Second was Havoc, skippered by Colin Beashel and his crew of Richie Allanson, and Henry Kernot. Third was Flirtation, skippered by Matt Crawford and crewed by Robert Crawford, Lucy Shephard and Karl Bromfield.

Race Three saw a clear start for everyone. The breeze had increased in strength a little to 10 knots, and an axis of 050 was set. After the first lap the course was moved to 070. Havoc was first, 1435 Skippered by Jeanne-Claude Strong and her crew of Seve Jarvin, Marcus Burke and Kate Devereux were second, with Flirtation in third place. 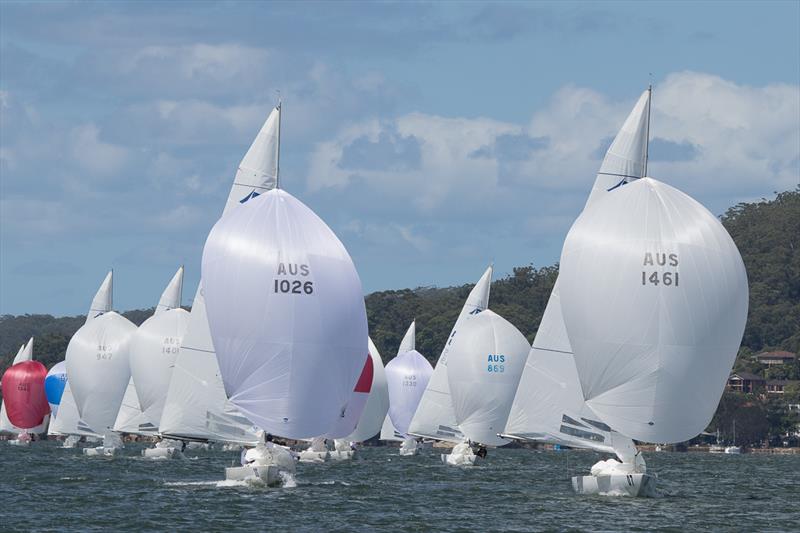 Havoc and Flirtation bring the fleet down to the bottom mark. – photo © Alex McKinnon

As the weather Gods were being kind, and tomorrow looks challenging, Peter Walsh chose to get a forth race in the bag. The wind had built a little further to around 12 knots and shifted well right to 100 degrees by now. Another clean start was achieved. Peter questioned how an Etchells fleet can get four starts under a P flag, and thanked the crews and the volunteers for their good work. 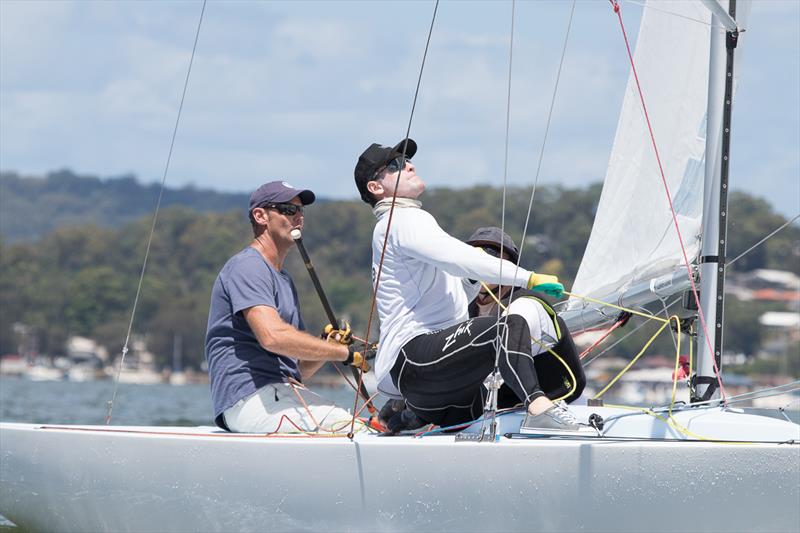 The final race of the day was won by the Victorian boat, Magpie, which is skippered by Graeme Taylor, and crewed by James Mayo and Ben Lamb. GT said, The conditions were shifty, very testing at times, but it was the same for everyone. It was a great day out on the water, and the Race Committee did a good job to get the four races in. However he did have one suggestion for the race committee. Given the forecast tomorrow was for very light winds the racing should be cancelled and we should all go and watch the SailGP racing instead. We could then have an early start on the Sunday, and have the other four races. No word has been received from the committee as yet

Second in Race Four was 1435 and third was Top 40. Gosford Sailing Club has also reintroduced the Oyster Cup. It was last won back in 2000. It is a handicap race awarded on the first completed race of the series. The winner is decided based on the age of the boats crew. This year it was taken out by Great White Hunter, skippered by David Dunn with his crew Andrew Howe and Jan Sholten. The trophy was presented by Paul Turner. 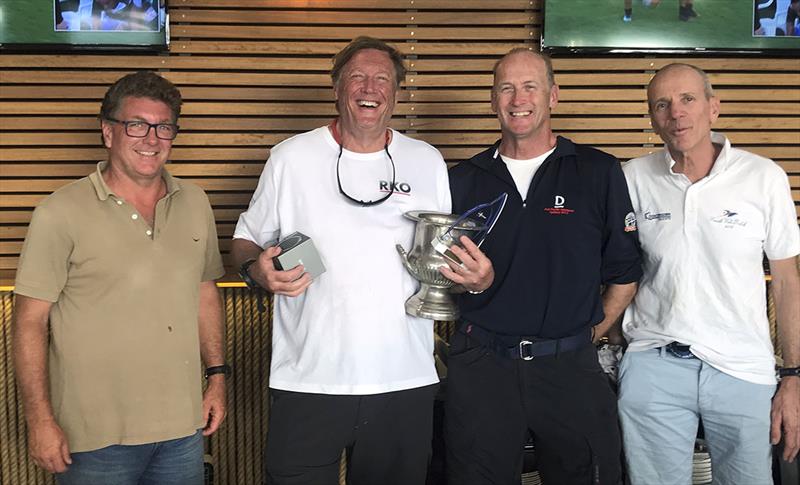 Tomorrows racing will be tight, with many of the boats in the top six having a bad race today, so when a drop comes into play after six races, it could alter the leader board significantly. At the moment Top 40 is on 15 point, leading by just one point over Havoc. 1435 is one point further behind on 17.

Full results can be found here 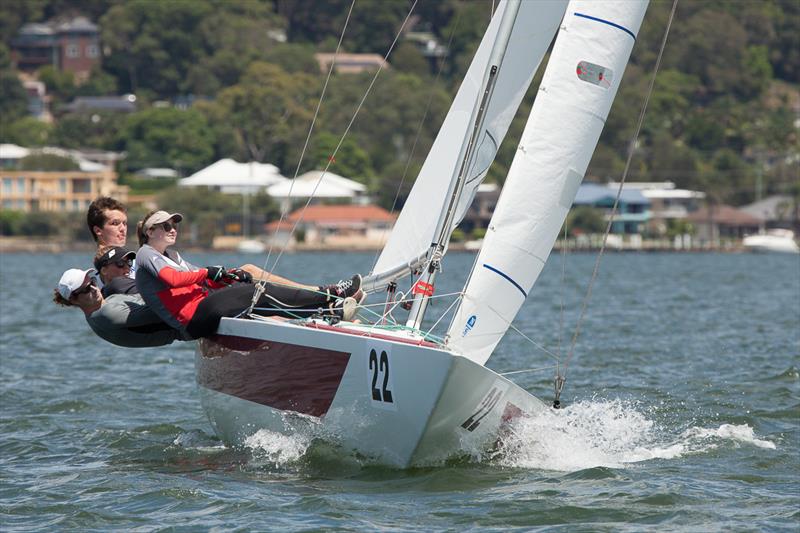 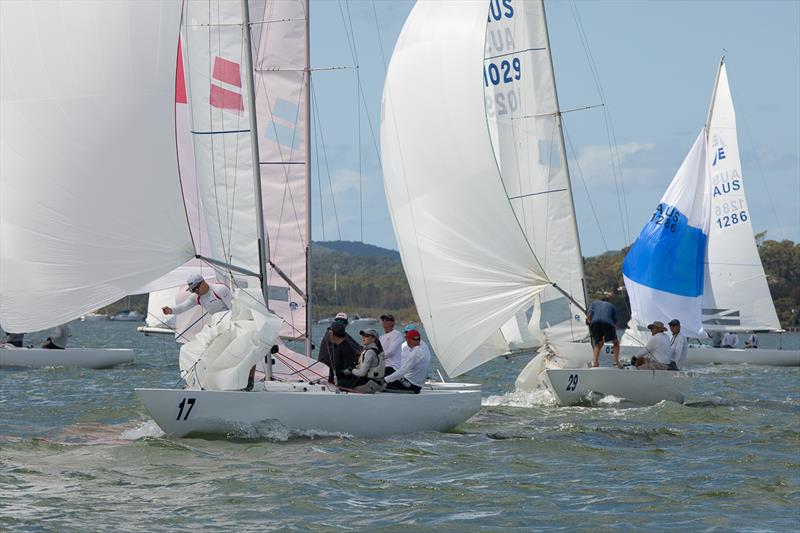 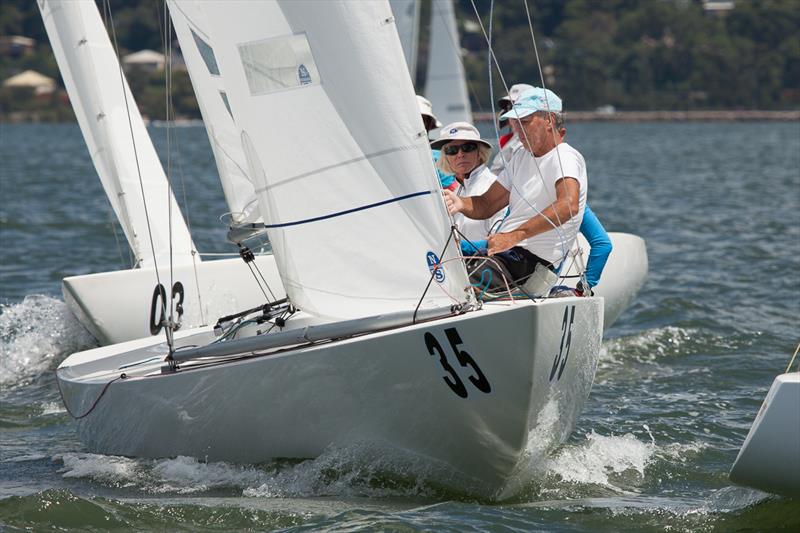 1435 Skippered by JC Strong with crew Seve Jarvin, Marcus Burke and Kate Devereux in close competition on the way to the top mark in the first race. – photo © Alex McKinnon 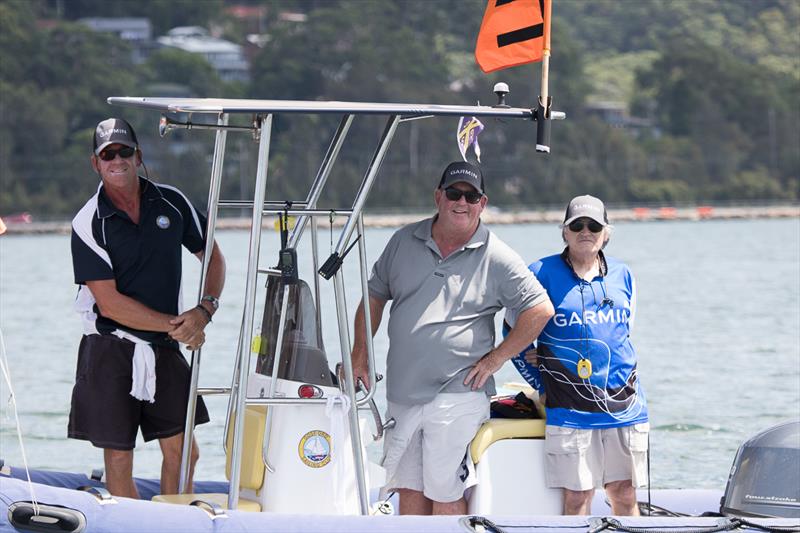 Some of the wonderful volunteers who help make this regatta possible. – photo © Alex McKinnon