Jean-Luc Van Den Heede still has a solid hold on the lead, despite damage sustained to Matmut's mast during the Southern Ocean. © Christophe Favreau / Matmut / PPL

Istvan Kopar rounded Cape Horn at 19:00 UTC yesterday, giving the 65-year old American/Hungarian a perfect New Year boost. To have got this far has been a triumph over adversity in every sense since the start from Les Sables d’Olonne on July 1st last year.

Kopar’s Tradewind 35 Puffin has suffered continued self-steering issues from Day 1 that led him to consider throwing in the towel at the Cape Verde islands. His SSB radio has been on the blink almost as long, preventing him from picking up weather forecasts or communicating with other skippers; his freshwater tanks became contaminated, and Kopar had to fashion new cogs to replace those that were breaking up in the steering pedestal gearbox.

Yet despite all this, Kopar has become the 4th of 17 starters to round the Cape back into the Atlantic, speeding along at 6 knots, having recovered 58 miles on race leader Jean-Luc Van Den Heede over the Christmas/New Year period. 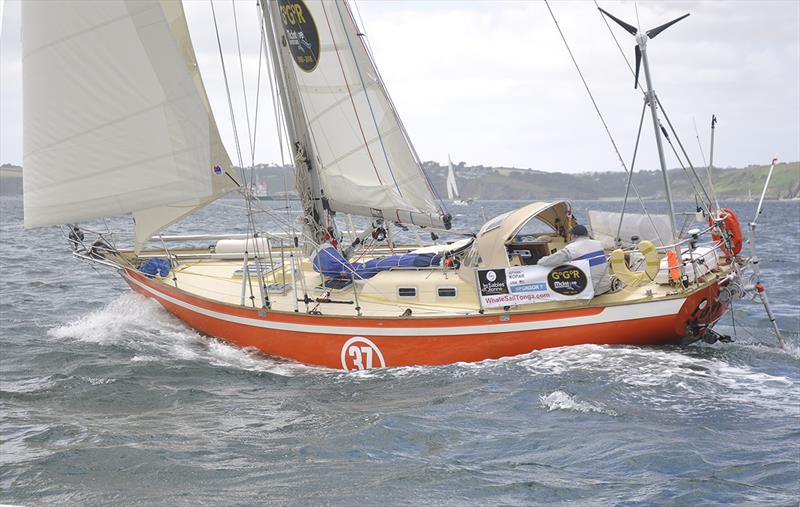 The 73-year old Frenchman crossed the Equator on December 26 and today is now within 2,500 miles of the finish, confidently predicting a return to Les Sables d’Olonne on January 26.

Whether it will be Jean-Luc and his Rustler 36 Matmut that takes the winning gun remains very much in the balance. His lead over 2nd placed Dutchman Mark Slats has ebbed and flowed over the past 12 days, jumping from 700 miles on December 21 to 1,100 miles after Christmas to stand at around 900 miles today. 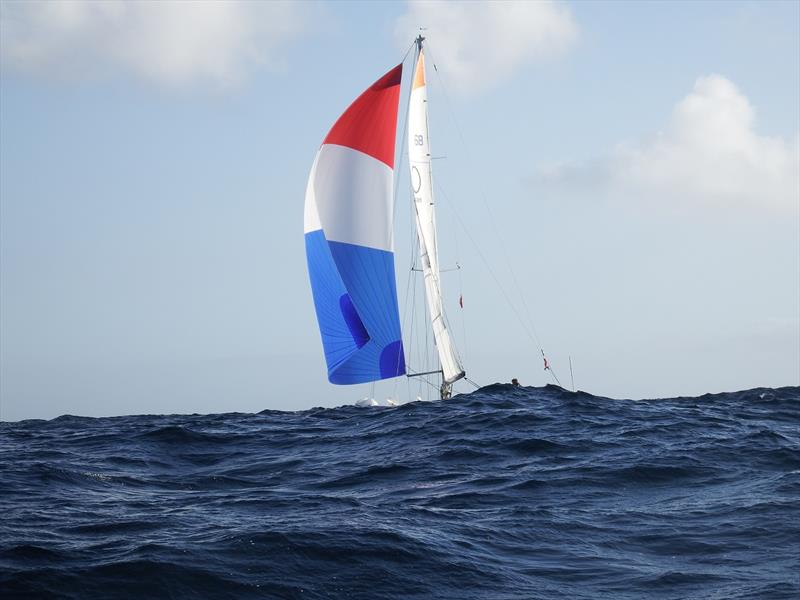 The tracker on Slat’s Rustler 36 Ohpen Maverick stopped transmitting early yesterday, but dead reckoning suggests that he will cross the Equator later today.

While Van Den Heede continues to nurse Matmut’s damaged rig, it has not been plain-sailing for Slats either. The Dutchman reports. “Sailing close hauled for the past 14 days has had a huge impact on the boat. The thick-walled steel bracket holding the wind vane to the transom was nearly torn off by the strain. My ‘Flintstone’ repair using wood took from 16:00 to 03:00 to complete and is now as strong as ever, and luckily, I didn’t have to stop sailing.”

He also reported that the rubber collar sealing the mast where it goes through the deck had split, but a tube of Sikkaflex has stopped the leaks.

On a personal front, Slats says that the wet conditions on deck has led to a reoccurrence of the salt-water boils that he first experienced on his buttocks during his record-setting solo row across the Atlantic at the end of 2017. “These spots re-appear immediately whenever my butt gets wet. It’s very painful and I have had to resort to wearing my full Southern Ocean suit on deck in 40 degrees conditions!”

Slats can now look forward to a week of easy sailing in the SE Trades and at the last full report, was making 6.5 knots against Matmut’s 5.8 but knows that he must now average 30 miles a day more to have any hope of beating Van Den Heede to the finish line.

One reason for Matmut’s lack of speed has been the Sargasso weed that grows in abundance north of the Equator. It catches on the keel, as well as the water generator prop-shaft and Walker towed log if Van Den Heede tried to use them. His navigation has also been hampered by damage to his two sextants. One he dropped, and the other has suffered from salt water corrosion. During a recent call to Race HQ, Jean-Luc joked: “I know where Les Sables d’Olonne is…I just don’t know exactly where I am!”

Today, main concern is focussed on 3rd placed Estonian Uku Randmaa whose Rustler 36 One and All has failed to out-run a storm now heading straight for him 1,000 miles east of the Argentine coast. Race Chairman Don McIntyre says:

“Unfortunately he cannot outrun it as preceding northerly winds may halt his progress and then push him into the most dangerous sector where he may be trapped for about 18h-24hrs. Winds are expected to gust 60-75kts with dangerous 6-8mtr seas. The system is about 800 miles across moving relatively fast. It’s a large system!”

Race HQ will be monitoring Uku’s position carefully and remain on-hand 24/7 providing him with regular weather reports and advice.

Meanwhile, Finland’s Tapio Lehtinen continues to lag in 5th place mid-way across the South Pacific Ocean, plagued by barnacle growth on his Gaia 36 Asteria. Efforts before Christmas to hang over the side suspended from a spinnaker halyard and use a pole with scraper attached to clear the shellfish failed to work, and continued shark sightings have precluded any thought of diving overboard to scrape the hull clean.

Today, Asteria was making just 3.3 knots, having lost a further 760 miles on the race leader over the past 12 days. But Tapio remains buoyant, enjoying the solitude and the birds attracted by his presence. He has plenty of food, water, books and music and hopes to round Cape Horn at the end of January. The hope also is that he may just finish the race before the prize giving on April 22.

His race now is against the performance set by Sir Robin Knox-Johnston and his yacht Suhaili 50 years ago. Today, Asteria is 690 miles ahead, but judging by current performance that is likely to shrink further in this virtual race around the globe.

Russian skipper Igor Zaretskiy, now back in Moscow after leaving his Endurance 35 Esmeralda in Albany, W Australia before Christmas, will undergo a health check tomorrow that will determine whether he will be able to restart the race in the Chichester Class before the January 14 deadline. If he gets the all-clear from doctors then he intends to return to Australia immediately, but if an operation is advised, recovery will mean that he can’t restart before the start of the Southern Ocean Spring season in November.

All within the GGR Family send our best wishes.

Irish GGR skipper Gregor McGuckin has accepted an offer from American Cody Cordwainer, a tugboat captain operating out of Brooklyn Navy Yard, to salvage his yacht currently 1,100 miles west of Fremantle W.Australia. In a plea for support, Cody has posted on Facebook.

“We’ll make no profit on this enterprise. The distillery has offered €1000 in return for it’s whiskey, but that will not even begin to cover all the expenses. We’ll need help to make this happen. Funding of course is great but we also need contacts in Perth Australia. We’ll need a vessel to rescue his boat, and a place to put it once rescued. Think you could help? PM/DM us for more details and head over to Instagram and give @whiskeyrescue a follow!