Day two of the M32 European Series Marstrand dawned with the brilliant sunshine so lacking on Friday, but with a shortage of wind. However building cumulus cloud inland brought a sense of promise.

In the build-up to racing, flags were not flying but the nimble M32s were flying their weather hull under genniker. By 1300, when racing started, there was enough breeze for the eight high performance one design catamarans to sail fully powered up without gennakers upwind. As the afternoon wore on the wind built to double digits.

After Bliksem, the Dutch team of US-based Pieter Taaselar, won five of yesterday’s six races, the lighter conditions initially favoured some other teams. Always in the hunt, Richard Davies’ Section 16 from Switzerland finally managed to score a bullet in today’s opening race. However as an example of what a high scoring day it was for most, in the next race Section 16 was called over early along with two other M32 heavy hitters, Bliksem and Ian Williams’ GAC Pindar, and finished last. 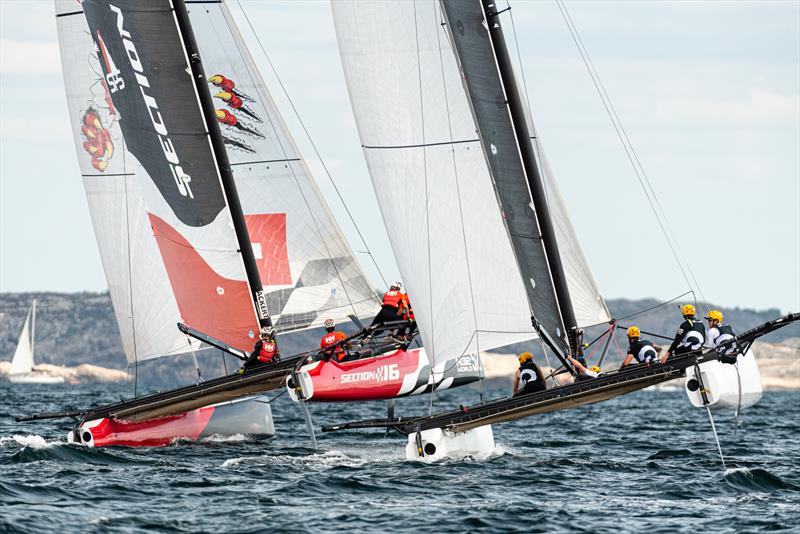 Having an up, but largely down, day was Andrea Lacorte’s Vitamina Velocce Cetilar, who was chief beneficiary of the trio of race two OCSes. This enabling him to lead around the reaching mark and then on to his five minutes of fame in a day that otherwise Lacorte admitted could have been better. However the Italian skipper, whose company Cetilar backed the opening event of the season in Pisa, is enjoying sailing in Scandinavia. “The positive is to be here racing in Marstrand. It is a fantastic place. It’s my first time in Sweden and for sure it is one of the best places I have ever sailed.”

Even Ian Williams’ normally immaculate GAC Pindar has been struggling here and perhaps the relative stability of the conditions has provided fewer opportunities than usual for the British team to fight back. Today Williams and his crew won the third race, but otherwise scored no result higher than a fifth. 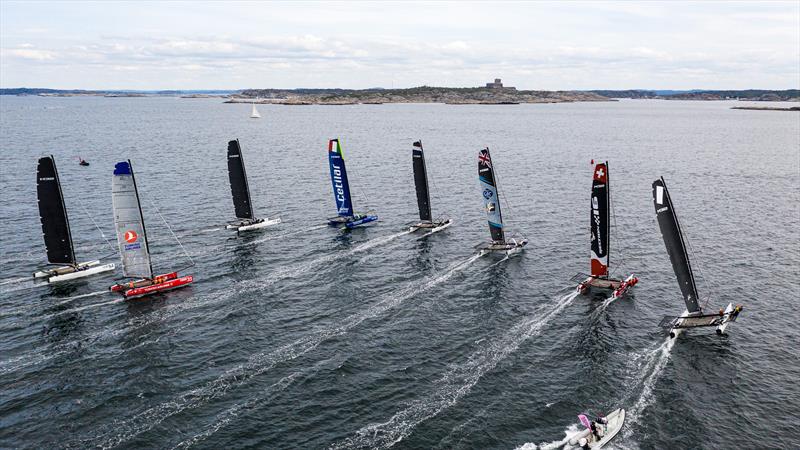 As the afternoon progressed, the sky clouded over, the wind slowly built, clocked right and then surprisingly backed again. By mid-afternoon Bliksem was firing on all cylinders again and in swift succession claimed today’s final three races. With an unrivalled consistency that saw them finish no worse than fourth, Bliksem once again won the day by five points and will start the final day of competition tomorrow 18 points (or around two races) ahead. Despite this Taaselar said they are not going to rest on their laurels. “We will keep improving and doing our best.”

As yesterday, mastering the reaching starts was vital. Even for the polished Bliksem team this proved problematic today, Taaselar admitted: “We had one start where we got rolled and the second one someone came up from underneath us and it was too late to bail out. But then we had a talk and found ourselves better able to do it in the second half of the day, especially when the wind went left and the committee boat end became more favoured.” 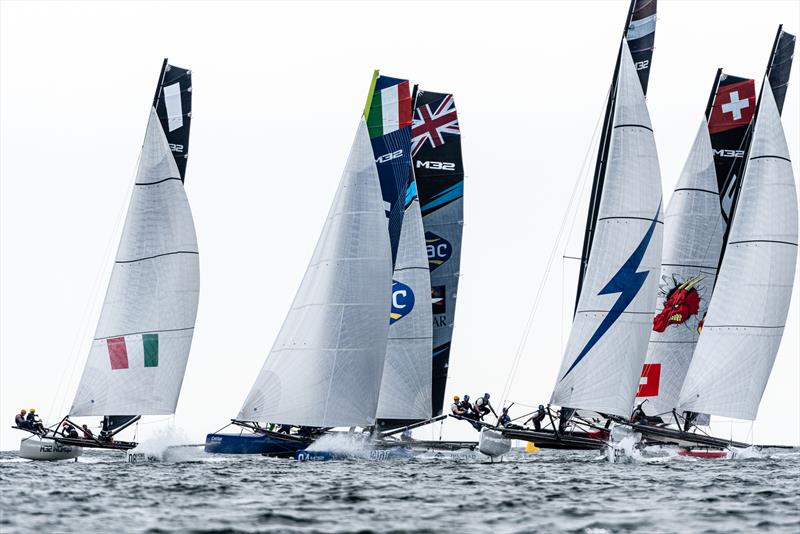 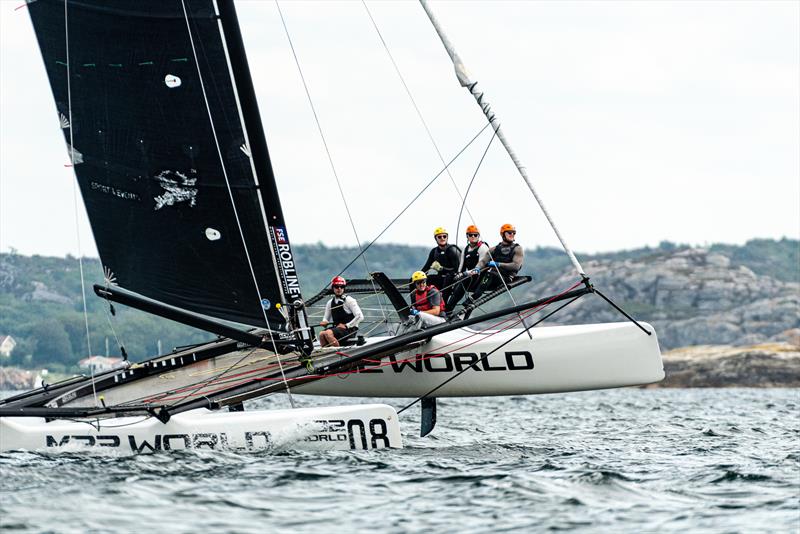 Aschenbrenner, one of the most talented match racers of his generation, admitted he was playing catch-up. “I haven’t sailed the M32 since Marstrand last year. We had a good debrief after yesterday and sorted all our errors out for the first race and had a solid day. We don’t take high risks, we just want to be in the middle and then work our way up from that.” However this conservative approach means they frequently don’t win races.

Progressively improving too is the well-known Inga from Sweden team of Richard Göransson, which currently lies fifth but in the tight mid-fleet where just four points separate third from sixth after 12 races. “We made a big step up from yesterday,” explained Göransson, for whom (coming from the east coast) this is only the second time he has raced in glorious Marstrand. “Some of it was trim because we have a new main, so we adjusted the rig to that and the boat was much easier for me to steer today.” 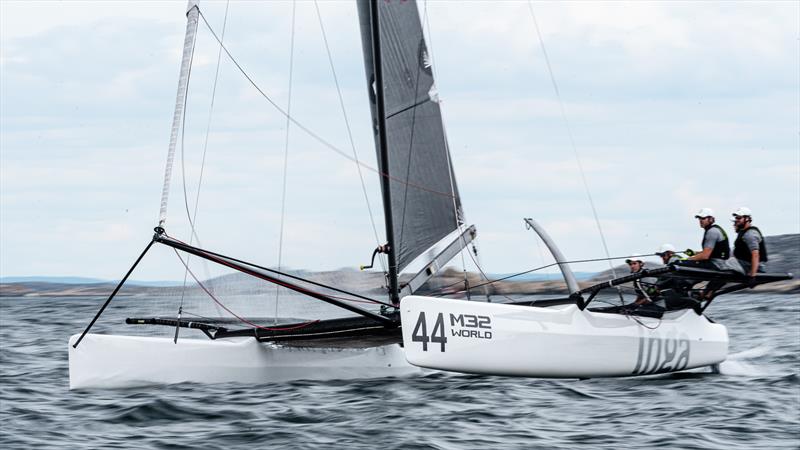 Making it out on to the race course today, having only just resolved some insurance issues, was Karlsson Racing Team, skippered by Swede Anton Karlsson who is just 17-years-old. The boat has been lent to Karlsson by popular Swedish match racer Johnie Berntsson for whom he has crewed since he was 13 years old. The ultra-green crew, who are otherwise all in their early 20s, were nonetheless pleased to be in the mix. “Honestly before the regatta we had very low expectations, we thought we would be a lot worse but we still had contact with the fleet and could keep the speed with them,” said Karlsson.

The final day of racing tomorrow will kick off with a first warning signal scheduled for 1200. 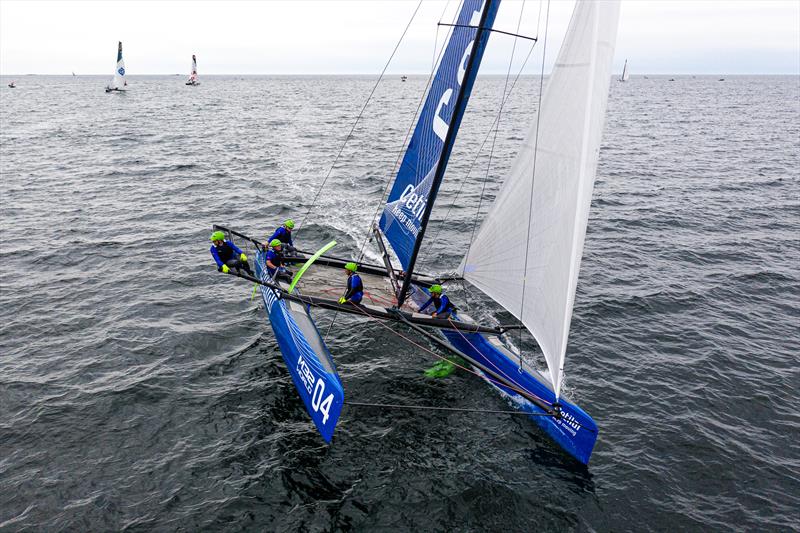