The leaders in the Mini-Transat La Boulangère have passed the latitude of Madeira this evening. Though they can almost glimpse the finish of this first leg to Las Palmas de Gran Canaria, the end of the course promises to be a bit of a struggle in light airs.

The first ETAs are likely from Sunday morning. For now, François Jambou (prototype) and Ambrogio Beccaria (production boat) are holding rank up front. Astern, numerous competitors are lamenting technical woes, which are more or less complicated to deal with. On a pit stop since Tuesday in La Coruña, Jonathan Chodkiewiez has announced his retirement.

The women and men signed up for the Mini-Transat La Boulangère will have certainly earned a warm welcome on their arrival in Las Palmas de Gran Canaria! Whatever their ranking, they’ll have to battle right the way to the finish, get on top of their fatigue and possible technical issues, and contend with a fickle weather forecast.

At the 16:00 UTC position report, François Jambou (865) was only 200 miles from the finish, still trailed by Axel Tréhin (945) and Tanguy Bouroullec (969). Italian Ambrogio Beccaria (943), leader in the production boat category, had 270 miles to go at the same time. Given the expected weather conditions, that’s both a little and a lot! Indeed, the wind is set to continue to drop away dramatically and the approach on the Canaries promises to be complicated. The front runners will have to exploit every little vein of breeze, which won’t be easy given the little weather information they have at their disposal. In both categories, there might well be a last-minute upset in the ranking. 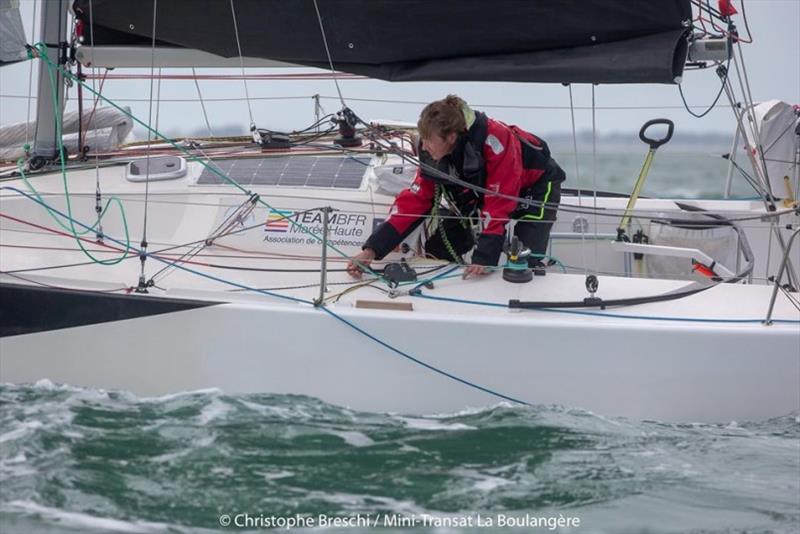 A race against the clock for David Kremer near Vigo and Louis-Xavier Lamiraud on a pit stop in Peniche, whilst Luca Rosetti’s tracker is now working

David Kremer (260) is still on a pit stop in Baiona, in northern Spain, after the transom pulled out of his prototype. However, a kind act of solidarity is in force as two of David’s friends have hit the road to help him get the prototype out of the water and re-laminate and reinforce the transom. However, it’s a race against the clock to complete the repairs and head back out onto the racetrack within the 72 hours permitted for a pit stop.

Louis-Xavier Lamiraud (479) has made it to the port of Peniche, to the North of Lisbon. He’s broken the system connecting his autopilot and his back-up system isn’t playing ball. Louis-Xavier plans to effect repairs and hit the racetrack again as soon as possible.

At the request of Race Management, Luca Rosetti (342) has fired up his emergency positioning beacon. Luca is well and can now be located on the cartography once more.

There is certainly a flurry of technical woes at the moment. Yann Blondel (836) will be stopping off at Leixões, near Porto, though he is yet to indicate the nature of the problems he’s encountered. Marie-Amélie Lénaerts (833) is experiencing an issue with her steering system. The Belgian sailor is currently hove to in a bid to repair it. Guillaume Coupé (906) has hit a UFO (unidentified floating object) and is checking his boat hasn’t suffered too much. As for Morten Bogacki (934) and Damien Garnier (788), it’s likely they’re encountering autopilot problems. Valiantly bringing up the rear after his pit stop, Briton Joe Lacey is zigzagging his way around the north-west tip of Spain and in another 39 hours or so the wind should actually turn in his favour at last! For certain sailors then, the 1,350 miles separating La Rochelle and Las Palmas de Gran Canaria have become quite an epic…

Accessing the Mini-Transat from… Poland

Poland’s links with the Mini-Transat date right back to the very first edition of the race, which in 1977 set sail from Penzance in the UK, bound for Antigua via Tenerife. Of the 23 entries, Pole Kasimierz Jaworski (Spanielek) sailed an absolute blinder to secure a much deserved second place. Today, there are actually 7 Mini 6.50s based in Poland – ranging from a virtual museum piece, prototype No.29 built way back in 1989, right up to three much more modern production and prototype boats with numbers upward of 900. The newest of these is No.961 (Michal Weselak Racing) skippered by Michal Weselak, who is the only Pole in this 2019 edition of the Mini-Transat La Boulangère.

Michal describes his journey to the Mini-Transat start line before setting sail from La Rochelle: “I started sailing just 8 years ago during my studies. I thought it would be good for me and that I might have a talent for it. My work relates to educating young people back in Poland aboard sail training ships, by showing them what life at sea is all about and how to sail. One night, whilst on watch aboard the ship, I decided that I needed something more in my life if I too was to become a better sailor, which is my main goal in this race. I thought about which class would be the best way to get experience. Imoca is too expensive for me and it’s not on my horizon back in Poland; the same is true for the Class40 and the Figaro. Then the idea of the Mini came to me and for a couple of months I researched ways to get aboard one. My Polish friend Radoslaw Kowalczyk, who’s done the Mini Transat himself, has the old boat 790, so that was my ticket onto the scene through rebuilding her and starting to learn how to sail her efficiently. It’s taken about 3 seasons to learn the necessary skills, how to work on deck, how to splice and so on. I then managed to scrape together enough money to buy the fully carbon 961 and I’ve been putting in a lot of work preparing her for this race.”

Michal has had a particularly tough journey to the start line, at times being so short of money that he hasn’t been able to afford to buy bread. Speaking to him it’s evident that he has always had fire in his belly though, and this is what is driving him down the Atlantic, nearly level with the Strait of Gibraltar in 16th place in the prototype fleet at 16:00 UTC this Friday.

“It’s very hard accessing the Mini from Eastern Europe because it’s about 3 times more expensive for us than it is for French sailors, for whom all the relevant networks are readily available and accessible. I’m now completely broke, but there are things you can’t buy in life. Happiness is one of them and I hope I will take that away from this race, and I also hope to learn lots for my career and for my life going forward. Racing a Mini competitively isn’t just about learning to be a good sailor. It teaches you how to manage your life. You have to manage your budget, the work on deck, the transport of the boat and the logistics. This is important for my career as I am still young. The Mini Class is hard to access when you’re not French, especially when you don’t speak the language and Poland is a poor country by comparison. However, if ever you have any questions regarding your boat, fellow sailors will help you so it is like a big family. I feel very welcome here, especially from the organisation and other overseas competitors and I’ve met some very nice sailors here of all nationalities.”

Like a number of the competitors, Michal had to quit his job in order to find the time to get out on the water and amass a decent amount of experience on the Mini circuit to prepare every element of his boat. In this way, he’s managed to compete in 2 Battle of Gotland races, 3 Around Gotlands, 2 Szczecin-Gdansk races including a race record and the 1000 Mile North Sea Race. In 2019, he’s completed the Gran Premio d’Italia, Mini en Mai, the Marie-Agnes Peron Trophy and the Mini Transat, usually finishing around mid-fleet.

“I feel nervous about this race. It’s my first transatlantic passage. I feel that my boat is well-prepared though and I think I have a safe boat. It’s all about balance at the end of the day.” Hopefully, within that balance he will find some time to give himself a good pat on the back because he’s worked really, really hard to get where he is today, powering through the Atlantic as his compatriot did 42 years ago.