The Race Committee released the 13 Class40s competing in the Normandy Channel Race bang on 15:30 hours local time this Sunday.

It was with a typically Norman backdrop, cloudy skies with a few clear spells, perhaps in a nod to this 10thanniversary edition, that the fleet set sail after a clean start on a figure of eight-style circuit of around 6 miles across the Baie de Seine off the mouth of the River Orne, between the cardinal marks of Luc sur Mer and Ouistreham.

Making the most of what were almost perfect conditions to hit the racetrack, namely 10-12 knots of NNW’ly wind, the Italian and Spanish pairing on Eärendil didn’t give their rivals an inch throughout the initial coastal course, though it was hotly contested in their wake, providing a tempting foretaste of the battle which will be played out over the theoretical 1,000-mile course. Skippered by Pietro Luciani and Pablo Santurde Del Arco (double champion of the event), Eärendil dominated play from the opening tacks and was naturally the first to round the last mark of the coastal course before launching onto a beat towards the next passage mark at the Saint Marcouf Islands some 37 miles after the start in the Baie des Veys.

Brieuc Maisonneuve, a local sailor from Granville, and master sailmaker Éric Varin posted some flawlessly clean tack changes, enabling them to slip through into second place. Hot on their heels were the rather atypical crew from Normandy and Chamonix, Louis Duc and Aurélien Ducroz, followed by the brand new Cape Racing Yachts skippered by the German sailor Jörg Riechers and match-racer Cédric Château, and then Beijaflore skippered by William Mathelin-Moreaux and Amaury François.

Some 37 miles separate the last mark on the coastal course off Ouistreham and the last compulsory passage mark to be rounded to the West of Saint Marcouf. The competitors are set to benefit from a favourable current until late afternoon, before they have to punch tide off the Raz Blanchard, the first tricky section which, as is often the case in this great Norman classic, is already likely to reshuffle the cards.

After this fine start, the fleet is this evening facing the prospect of a less cheery episode, the cross-Channel passage and its share of shipping. The skippers will have to beat their way across in an easing 5 to 10 knots of NNW’ly breeze, before they tackle what is a legendary section of the event, the Solent passage, at around midday tomorrow. 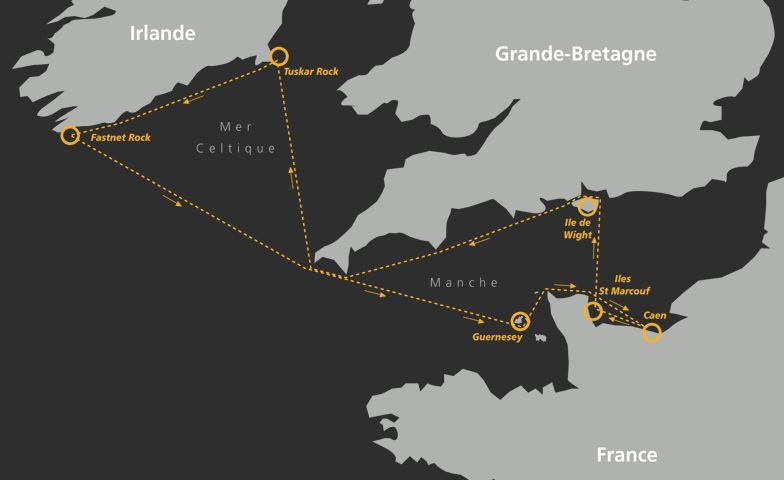