It was supposed to be a heavyweight bout between Chris Bake’s Team Aqua and Vladimir Prosikhin’s Team Nika.

These two, among the oldest, most successful teams in the high performance one design monohull class, started the 44Cup Palma, the final event of the season, separated by just one point at the top of the 2019 44Cup leaderboard. Behind them Igor Lah’s Team CEEREF went into the 44Cup Palma five points off the lead with Aleph Racing of Hugues Lepic a further point behind.

However this non-discardable final event of the season was to prove surprisingly dire for both the leaders who, against all expectation, began today’s final day of racing in last place. Meanwhile, two other teams were excelling Nico Poons’ Charisma, the 2018 defending 44Cup champion, and Igor Lah’s Team CEEREF, winner in 2016-17.

With the opening day of racing cancelled, Charisma scored two bullets on Friday while Team CEEREF had managed the same on Saturday. Today the final day of the event – Charisma won the first race, Team CEEREF the second, but significantly in the latter the Monaco-based Dutchman’s team had come last, reducing their nine point lead to just one. Going into today’s third and final race, not only was it all on for the event victory, but, delving deeper into the maths, the top three RC44 teams were effectively tied on points for the lead in the 2019 44Cup season’s points. 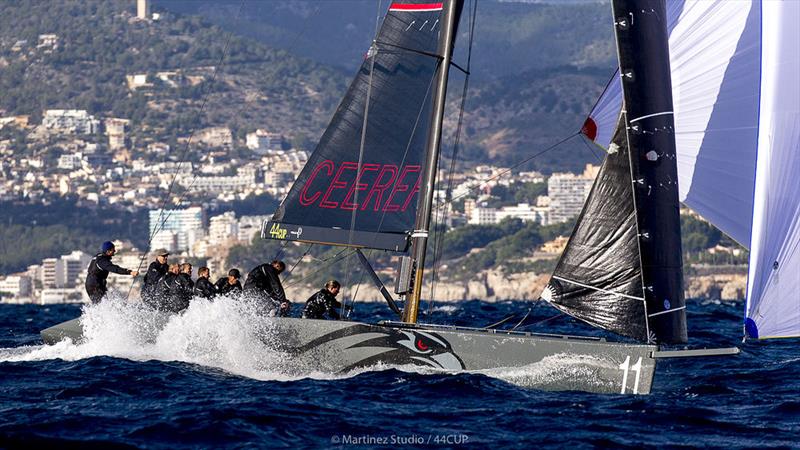 Fittingly after three difficult days for the race committee, for the last day, the Bay of Palma delivered, with the on-shore wind building well into the 20s for the final race, with an increasingly short, violent sea state. 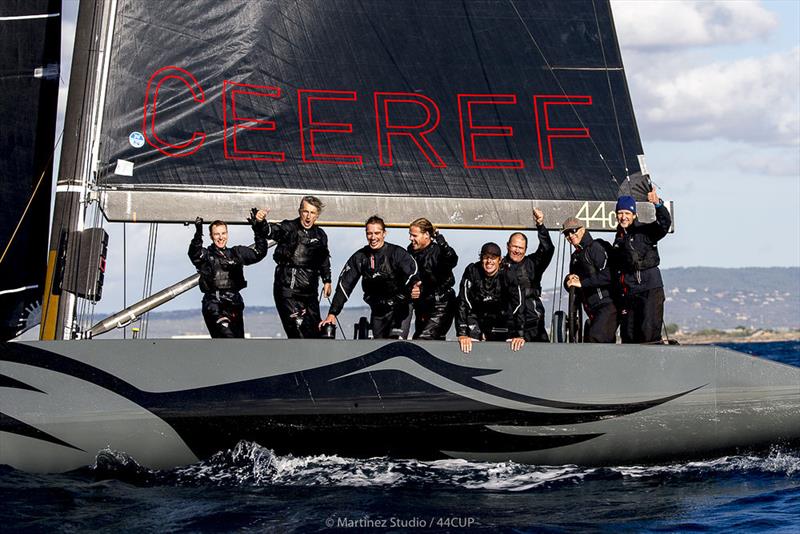 For this last race, Team CEEREF won the pin end and did well out to the left, but was third to the top mark behind Bronenosec Sailing Team and Charisma. Significantly at the leeward gate Team CEEREF split right from the two leaders and enjoyed a nice lift as she came back on starboard. She led at the top mark, a position she held to the finish with Charisma coming home second. This left the two teams tied, with Team CEEREF winning the 44Cup Palma on countback.

It was similar behind, where sixth and seventh place finishes for Team Nika and Team Aqua respectively left them tied in the 44Cup Palma, but significantly Vladimir Prosikhin’s team finishing seventh to Team Aqua’s eighth on countback. These poor results left Team CEEREF to win the 2019 44Cup season by two points. 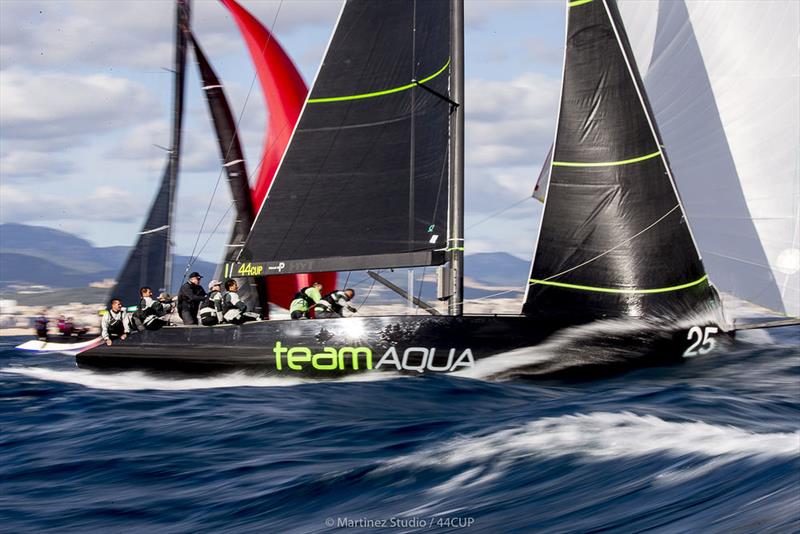 “I was sure it was impossible,” said a beaming Igor Lah, who only found out he’d won overall when Team CEEREF docked at the Real Club Nautico de Palma. “It was just mathematically possible and it looks like maths was on our side today! Today everyone on board wanted to win because we had some bad regattas and some bad luck. We needed this.” Here in Palma, he observed, they hadn’t sailed exceptional well, only that they hadn’t sailed to their usual high standard before this.

Of their outstanding performance British tactician Adrian Stead observed: “The goal was to come here and to win the regatta, but the beauty of this class being so strong, you can win, but if you don’t sail well, it is very easy to be at the back – which we know! We were positive with how we sailed, but we did enough to sneak past Charisma.

“Igor [Lah] really sailed the boat well because it was so shifty and gusty. Everyone put in 110% today. I am really pleased.” Aside from Lah and Stead, Team CEEREF comprised trimmers Dirk de Ridder, Javier De La Plaza and Lah’s son Tine, plus Andreas Axelsson, bowman Matteo Auguardo and grinder Jelle Janzen.

Being bold paid today, continued Stead. They particularly impressed after the first start when they attempted to cross the entire fleet on port.

For defending 44Cup champion Nico Poons and his Charisma team, this was his best result of the season (alongside second at the Adris 44Cup Rovinj). It was also a third podium finish this season for Torbjörn Törnqvist’s Artemis Racing. “We are happy to be on the podium and the racing was fun,” said Törnqvist, whose boat endured two collisions (neither their fault) on Friday. “That is part of it. It is intense and close. The sailing is as good as it gets it is so competitive. I am looking forward to next season.” 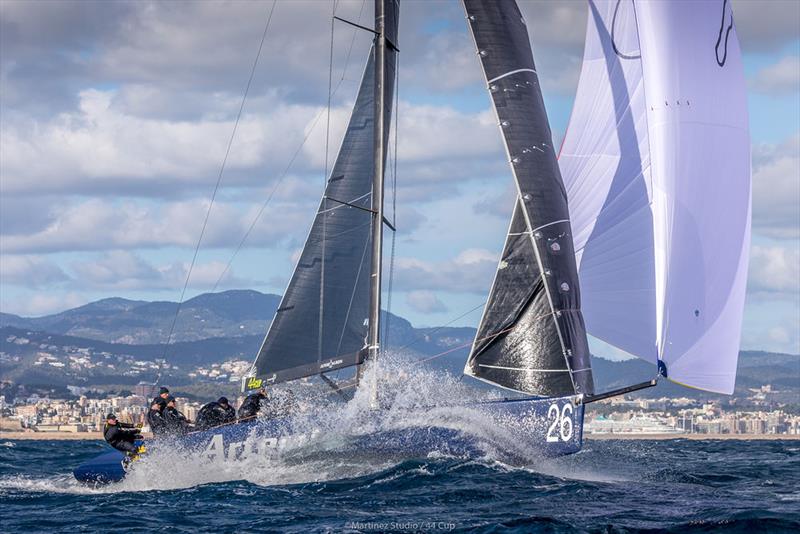 Tied on points with Artemis Racing, but fourth on countback here was Bronenosec Sailing Team, a result elevating them off the bottom spot on the leaderboard. “It was exciting – I like this much more than 5-6 knots,” said skipper Kirill Frolov of today’s conditions. They were deprived a podium finish after losing their bowman overboard at the top mark in today’s first race, dropping them from fourth to last.

A war story that will go down in 44Cup folklore occurred on the high speed last run of the last race when Peninsula Petroleum went ‘down the mine’ spectacularly. “There was a lot of pressure coming, which we anticipated, but it hit us at the bottom of a very big wave,” explained owner John Bassadone. “The bow went in and in and continued to go in… The stern of the boat came out so far that the rudder was completely outside of the water. The bowsprit broke and eventually it fell over on its side with the mast in the water. I got spat out along with Ed [Baird, tactician] and Jose Maria [Lara]. It was a bit worrying, because I went into the turbulent wash, and it took ages for me to come up and I was swallowing water. I am so happy…to be alive! This has never happened before on an RC44 I’m told…”

Despite their disappointing result in Palma, two event wins for Chris Bake’s Team Aqua this season caused them to finish the 2019 44Cup second overall, with Team Nika tied on points with them, but third on countback.

The 44Cup resumes in 2020 in Portorož, Slovenia at the end of April. 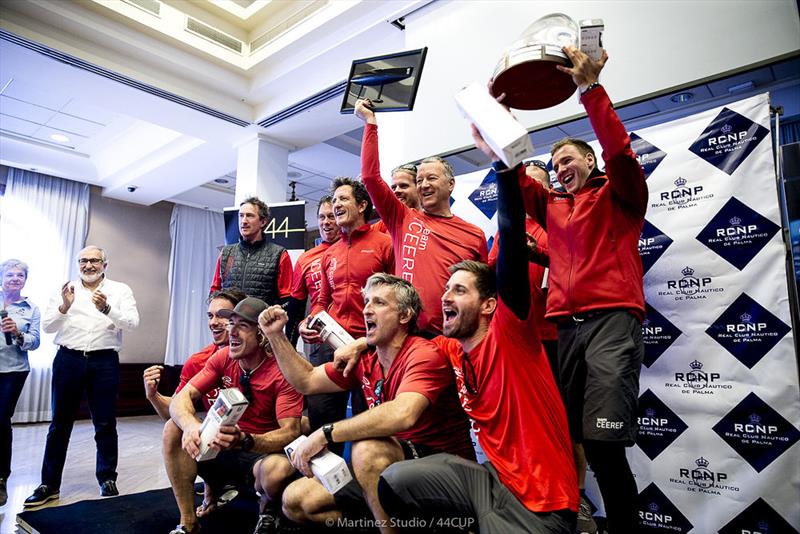