Q&A Peters & May Round Antigua Race

While playing favorites is a recipe for disaster in the journalism world, I’ll admit that Antigua is one of my favorite Caribbean islands.

What’s not to love? From the world-famous Pillars of Hercules formation that guards Antigua’s English Harbor, the soaring heights of Mount Obama (née Boggy Peak; elevation 1,19 feet), the historic ruins of Nelson’s Shipyard, and the sweeping views from Shirley Heights, to the island’s warm, friendly people, its beautiful beaches and its deep-rooted sailing culture, Antigua has much to offer Caribbean-bound sailors. Layer on top the island’s amazing sailing conditions, its marine-facing businesses, and its marque-level sailing events-including the Peters & May Round Antigua Race (April 27), which serves as Antigua Sailing Week’s opening act-and the picture only improves.

The Peters & May Round Antigua Race was revived in 2012 and has become a popular warm up to Antigua Sailing Week, giving sailors exposure to the island’s various bays, harbors and overall geography. Moreover, it also allows them to speed check against their rivals and size up their fleets.

This daylong event takes advantage of the island’s 54 miles of gorgeous coastline to test each team’s ability to negotiate a wide variety of conditions, angles and wave patterns, while also exposing the fleet to the Caribbean’s recent weather patterns.

But, as with all respected sailing records, it’s just a matter of time before the right crew, sailing aboard the right steed in the right weather pattern, takes a Sharpie market to the history books.

I checked in with Alison Sly-Adams and Lorna Saunders, president and race manger (respectively) of the Peters & May Round Antigua Race, via email, to learn more about this classic circumnavigation race.

How would you describe the Peters & May Round Antigua Race to someone who hasn’t yet participated in the regatta? Also, what is the level of competition like?

It’s a great race due to the various sea conditions, wind strengths and directions, not to mention the beautiful views of Antigua. It is not only a high-profile race for those that want to challenge the record course, but [it] is a great opportunity for those who want to practice their sail and boat handling [before] Antigua Sailing Week. 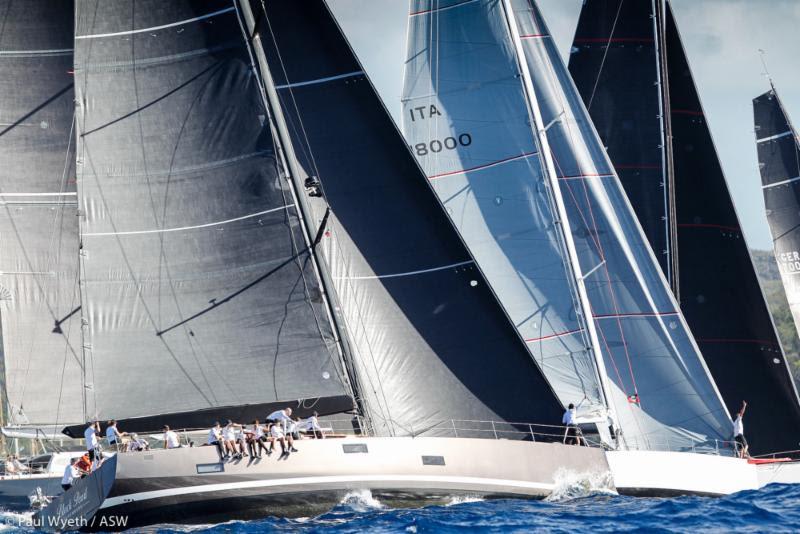 Start of CSA One in the Peters & May Round Antigua Race – 2018 Antigua Sailing Week – photo © Paul Wyeth / pwpictures.com

How many boats are you expecting to compete in the 2019 event? Also, will all of these boats go on to compete in Antigua Sailing Week or do some boats only participate in the Peters & May Round Antigua Race?

We expect to have around the average of 40 odd entries, which has been fairly consistent over the last four years.

Very occasionally participants plan to do only the Peters & May Round Antigua Race.

What are some of the course highlights, from a sailor’s perspective?

The beat from the start keeps the pre race adrenalin going. Generally, the first mark on the northeast side of the course is the beginning of a sleigh ride all the way across the top of the island. Then, [sailors] switch gears again [for] the tactical challenge of getting down the fickle west side of the island.

No resting, roll your sleeves up for the aggressive beat back to the finish. 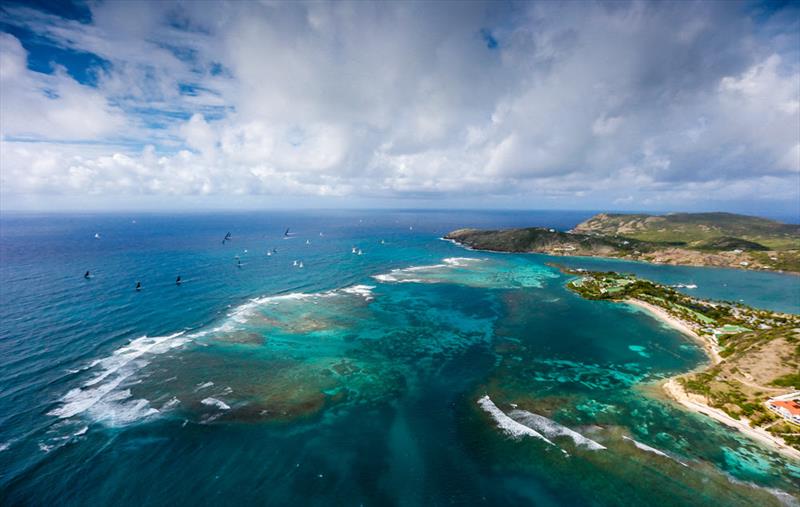 While the race record might stand at 3 hours, 26 minutes and 9 seconds, what is a more realistic time for, say, a 45-foot bareboat? What about for a 45-foot raceboat?

We generally don’t get the bareboat’s entering as they are non-spinnaker boats, but an average 45-foot raceboat can expect the race to be between seven and eight hours.

Given the current entry list, do you think there’s a chance that any of the 2019 fleet has a chance at breaking Phaedo 3’s 2015 course record? If so, who are the likely suspects?

As it stands at the moment I think Phaedo 3’s multihull record may stand for a bit longer, but we have a couple of contenders for the monohull record.

[For example,] SHK Scallywag is up for the challenge for the first time and Sojana is back to try and regain her title which was broken last year by Warrior, with a time of three hours, 55 minutes, 38 seconds. 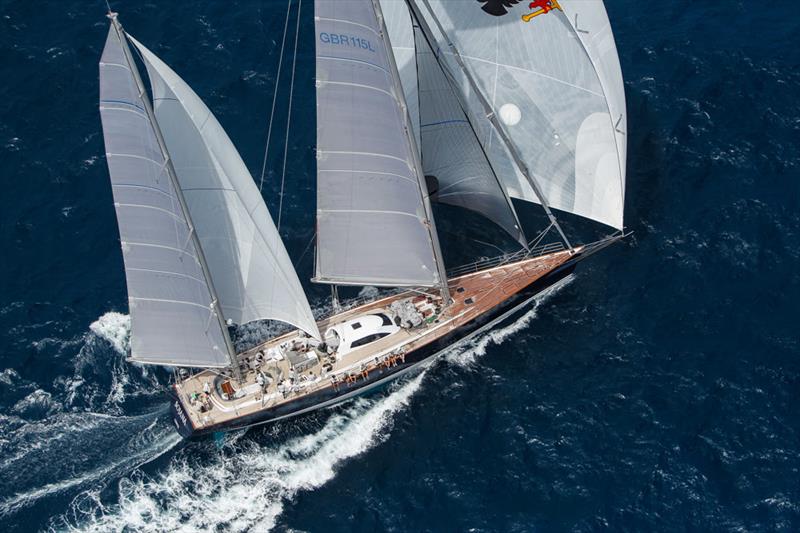 In the perfect world, what will the weather gods deliver on the morning of Saturday, April 27? Also, what about in a less-than-perfect world?

Ideally, 20 knots from the east would be fantastic. If there’s much southerly in the wind, it can make for a longer beat down the [island’s] west coast, all the way to the finish.

Can you tell us about any steps that you and the other event organizers have taken in the last couple years to help green-up the regatta or otherwise reduce its environmental footprint?

A big focus has been not just on recycling but removing items from the supply chain. Antigua banned Styrofoam and single-use plastic, so this has made our job much easier.

We have already campaigned successfully to remove usage of straws in many bars and restaurants island-wide, and plastic straws are now banned completely.

Last year the event introduced an event re-usable cup–we will repeat this exercise this year. Last year we estimated 35,000 cups were removed from the landfill. 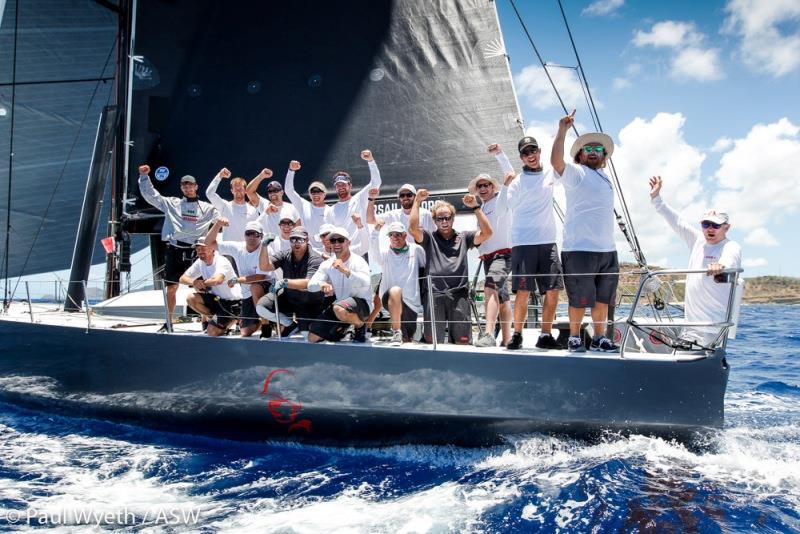 With the the new courses and the addition of the doublehanded and high-performance class that we have introduced to [Antigua Sailing Week], we hope this will encourage more yachts to come and enjoy this unique, record-breaking course, within the magnificent playground that nature has provided us with.