This was so close that initially the Caol Ila R crew felt they had lost. As Schaerer explained: “It was tough because we needed one boat between us and Jethou in order to win. We were hopeful we could get Vesper [Jim Swartz’s winner today under IRC] between us but that didn’t work by 12 seconds. So then we said ‘that’s fine – Jethou did a good job this week they won.'”

It was only when the time of Roberto Lacorte’s Mills Vismara 62 SuperNikka was corrected out, that it was found she had slipped into third, beaten by Caol Ila R by just two seconds. After discards were applied, Caol Ila knocked Jethou into second by 0.75 points with SuperNikka (the half-way stage leader) third, just 0.5 further astern after five races.

“Capri is a place I always love and it is good to come for regattas because it is not a place you go to the beach!” continued Schaerer, refuting the idea that sailing in Capri is typically a light wind affair. “We’ve always had wind here. In the Volcano Race one year we had 55 knots!”

Similarly this week, light it generally wasn’t, with an outstanding, giant windward-leeward yesterday in 12 knots while today’s race saw the wind gusting up to 20 knots, albeit dying towards the finish.

Today’s course included a beat of more than an hour’s duration, followed by a run and a partial lap of Capri in moderate winds but oceanic-scale seas, challenging both helmsman and crew.

Jethou’s Sir Peter Ogden admitted that after a glowing start to the regatta, today hadn’t been their best. “We were quick upwind but we didn’t sail downwind like we’ve done all week. We seemed slow. It’s dampened our optimism a bit.” ‘

In the Racer-Cruiser class there was another turn-around with Benoît de Froidmont’s Wally 60 Wallyño claiming today’s race, knocking Jean-Pierre Barjon’s Swan 601 Lorina 1895 into second overall by 1.25 points. Again this was exceedingly close. Today Wallyño beat Luciano Gandini’s Mylius 76 Twin Soul B by just 28 seconds under corrected. Had these positions reversed then Lorina 1895 would have won overall.

“Going into today we had four boats that were all within two points,” said de Froidmont. “I guess we were hungry after we didn’t do so well yesterday. Today we were leading most of the time and the boat was going doing well even though it was complicated because of the size of the waves. You had to concentrate a lot.”

Wallyño’s tactician, former Figaro sailor Gérald Véniard added: “We found some speed in this medium-light wind with choppy sea state. It is the first time we have shown good speed in these conditions.” 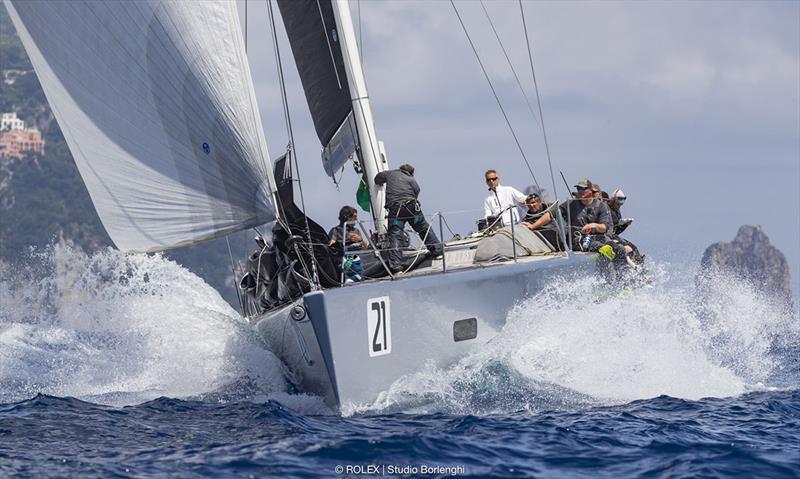 De Froidmont is also President of the International Maxi Association (IMA) and in this capacity he observed: “It was an amazing day and it has been an amazing event. I would like to thank the organisers, the yacht clubs, the race committee and jury. When you talk to the owners everyone has been happy this week.”

Taking place within the Racer-Cruiser class was the Mylius Cup, won by Aldo Parisotto’s Mylius 65 FD Oscar3. “Today was very difficult,” admitted Parisotto, who had former America’s Cup skipper Paolo Cian calling tactics. “It was the first time I have driven the boat in very big waves like that. It was difficult.” Parisotto was also delighted to have finished third in the Racer-Cruiser division. “That’s good because it means we go into the Maxi Yacht Rolex Cup a little bit more confident. I love this event. The organisation has been fantastic, helped by Rolex and the IMA and we’ve raced every day.”

“We sailed a really nice upwind against Twin Soul B, but I think because we were heavier we had better speed,” said Plis Play’s boat captain Jose Ruis. “Some waves were more than 3m high and we were a bit worried because our boat is really heavy and falling down the waves we thought we might pop the spinnaker.”

For this race Rosbeg was chartered back to her previous owner Riccardo Pavoncelli, who sailed her with many of his old crew plus present owner Irishman Neil Hogan. For Pavoncelli and his British skipper Andy Greenwood, this was his biggest ever win in the boat. “I am very happy because we haven’t sailed the boat for three years and the boat was in cruising mode,” he enthused. “We did the Tre Golfi because the owner said ‘my son wants to race’ so he lent us the boat.”

Of the Regata dei Tre Golfi he added: “We made two good calls one by Andy, going very close to rock off the west end of Capri and the other by me to go south of Capri [outbound]. Those two calls enabled us to catch up a lot.”

Of Rolex Capri Sailing Week International Maxi Association Secretary General Andrew McIrvine concluded: “This was a very special year as we’ve had both an excellent entry of fine maxi yachts rewarded with unusually helpful weather albeit colder at times than southern England! All three maxi divisions were hotly contested and enjoyed a wide variety of courses around this beautiful ‘fantasy’ island.”