Unless there is a flat calm, it is very likely that the outright record will fall in this August’s edition of the Royal Ocean Racing Club’s premium event, the Rolex Fastnet Race. For leading the charge in the world’s biggest offshore yacht race, with a fleet of 300-350 competing, will be the world’s fastest offshore boats – the Ultimes.

In the last windy Rolex Fastnet Race in 2011, the Loick Peyron-skippered Banque Populaire V blasted around the 608 mile course in one day, eight hours and 48 minutes. But for the mighty 131ft (40m) long trimaran (later re-christened Spindrift 2) her average speed, a mere 18.53 knots, was like she was towing buckets. Two years earlier she had managed the 2880 mile west to east Atlantic crossing, averaging 32.94 knots.

Today, while her transatlantic record may remain tough to beat, Banque Populaire V is old technology. Modern day Ultime trimarans at 100ft long may be shorter but, mostly thanks to their new foiling technology, are substantially faster. And this year’s Rolex Fastnet Race will feature at least three of them.

Francois Gabart is one of contemporary sailing’s most remarkable competitors. Pleasantly unassuming and relatively small framed, the blonde haired French 36-year-old graduated up through the usual French classes culminating in his getting backing from his insurance company sponsor MACIF for a Vendée Globe campaign. In 2012-13 he won the Vendée Globe on his first attempt, and subsequently the IMOCA class in the Rolex Fastnet Race sailing doublehanded with Michel Desjoyeaux. “I have just done the race once, so I have a 100% success rate!” he quips.

Since then Gabart has graduated up to the Ultime trimaran class and in 2017 he set a new time for the singlehanded round the world record of just 42 days 16 hours and 40 minutes – just under two days slower than the record for the fully crewed lap. During this Gabart averaged 27.2 knots, so one can imagine how MACIF, being sailed fully crewed, having since been improved, and racing against other Ultimes, should be able to destroy the present 18.53 knot record. MACIF would ‘only’ have to average 25.3+ knots to complete the Rolex Fastnet Race in under a day. 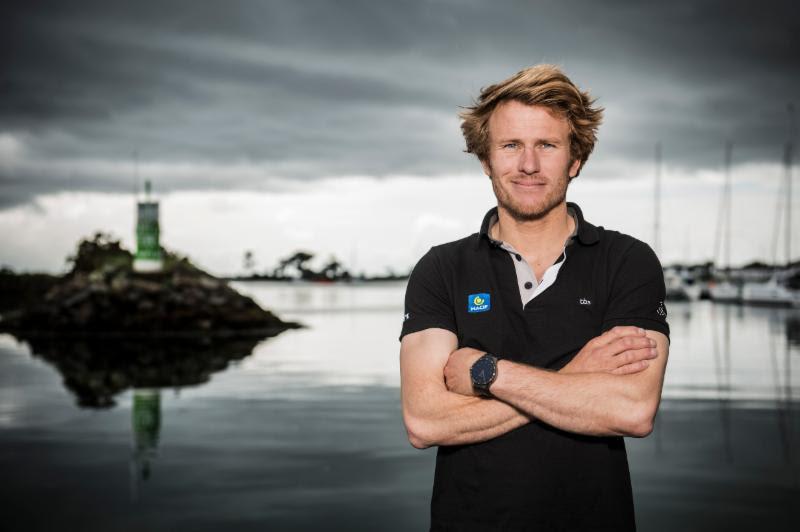 “With the speeds we can now reach and if conditions are good for flying, then we can break the record for sure, but it fully depends on the weather,” says Gabart. He adds that MACIF, all 30 x 21m of her, can fly in around 13 knots of wind but optimum conditions are 15-18 knots – more than this and the sea state becomes too lumpy. In her sweet spot MACIF has already touched 49.4 knots (in the Route du Rhum, singlehanded under autopilot) although he admits this is not the goal. “Our target is to average more than 40 knots.” A 40 knots Rolex Fastnet Race would take just over 15 hours!

However, the MACIF team mainly wants to race other Ultimes. The line-up at present includes the newly announced Franck Cammas-Charles Caudrelier co-skipper set-up on board the rebuilt Edmond de Rothschild, following its bow breakage in last autumn’s Route du Rhum.

Of significant interest will also be the Rolex Fastnet Race being the first competitive outing for the latest Ultime, Thomas Coville’s Sodebo Ultim 3. Coville is remarkable for having competing in almost every major sailing event from the America’s Cup and Whitbread/Volvo Ocean Race (winning with Groupama 4) to the Mini, IMOCA 60, ORMA 60 and for more than a decade in giant multihulls, on which in 2016 he set a new solo round the world record (later broken by Gabart). 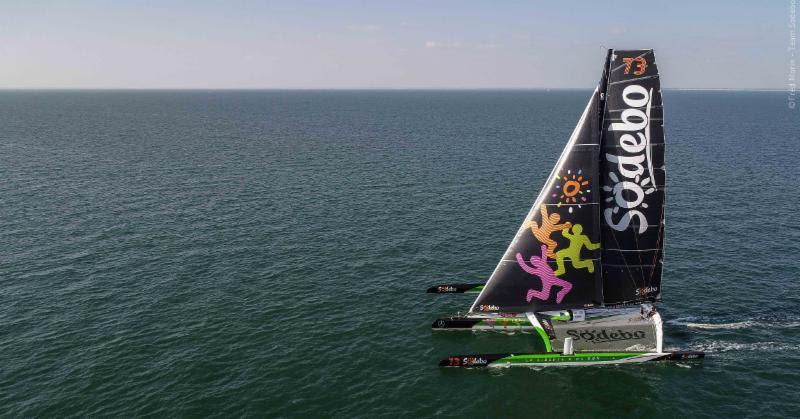 Coville also competed in the Fastnet with the French Corum team that won the 1991 Admiral’s Cup. He has fond memories of the race.

“The Rolex Fastnet Race will be our first race to test our new boat,” says Coville. “It is a great opportunity for us to compete against the other Ultimes and to be part of a big race in England. The Rolex Fastnet Race is very prestigious and usually has a lot of different conditions, so it is a perfect test.”

He also appreciates how the Royal Ocean Racing Club has opened their premier race out so that professional teams can compete (briefly) alongside family cruisers. “It is a mix of different ways of sailing and different levels, but it is all still the same passion for offshore sailing. I really like this way of thinking and the atmosphere.”

Inevitably the giant Ultimes are fiendishly complex craft, especially now they can fly. Even come August it will be early days for the Sodebo team, who have only been testing their new boat, which has novel features such as a cabin forward of the mast, for the last month. “We have been discovering the boat technically – furling and unfurling, tacking and gybing and using the boards, up and down and the daggerboard and playing with the rake of the rudders. It is working pretty well,” says Coville. “We’ve just had two offshore sessions for two or three days each in 30 knots and the boat seems very safe and quite fast. But it is a long way from being stable and achieving really big speeds.”

The Rolex Fastnet Race starting from Cowes, UK on Saturday 3 August will give Thomas Coville a chance to test Sodebo Ultim 3 – photo © Sodebo

For Coville competition between the other Ultimes in the Rolex Fastnet Race is paramount: “The course isn’t direct and the record really depends on the weather. We are more interested in racing together and being part of the event.”

As to the performance of the new Sodebo Ultim 3 he says: “Before on the old Ultimes, the target was 30 knots. Now our targets are 35+ knot average speeds. It is a huge step up, but you need to stabilise the flight or to be skimming to raise the average speed and that is sea state dependent. It is amazing how easy it is to go fast in a good sea state.”

For the Ultimes the 2019 Rolex Fastnet Race could be a case of set off and be home in time for tea.

2019 Facts and Stats document can be found HERE 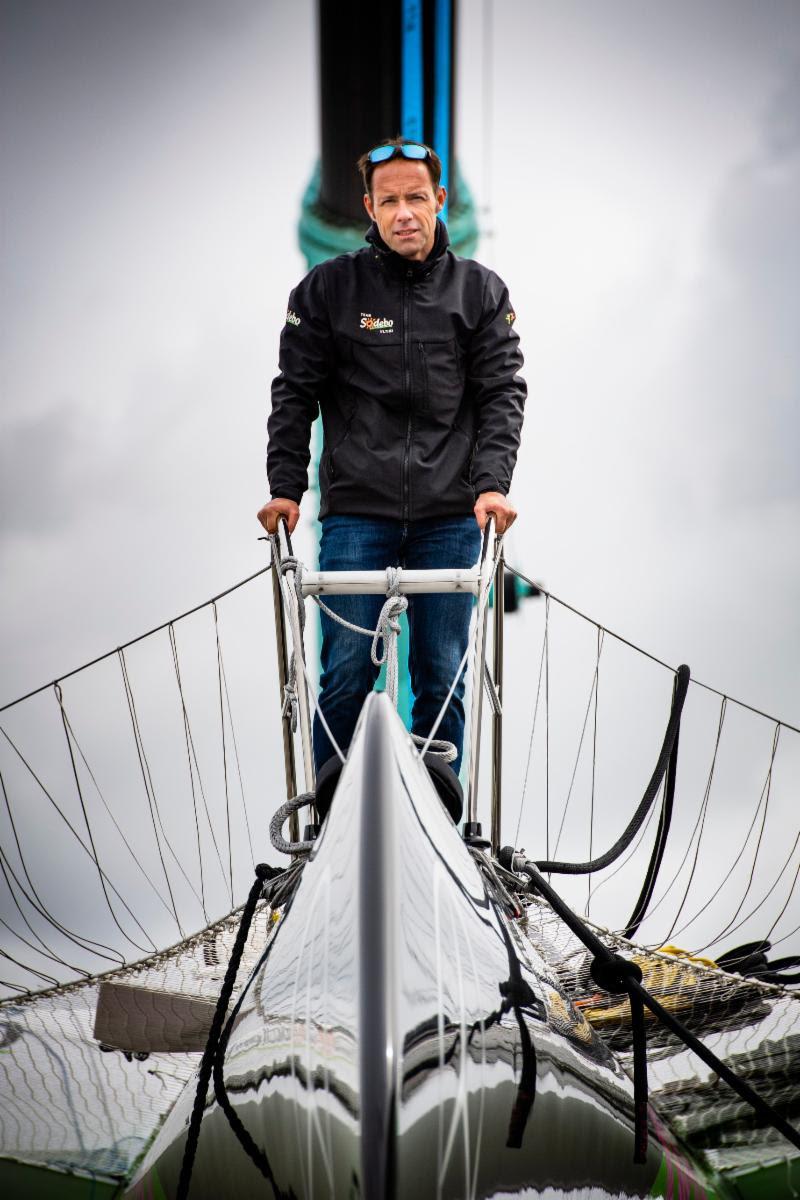