The 32m long Ultim trimarans laid on a spectacular finish in this 48th Rolex Fastnet Race resulting in MACIF, the leader since rounding the Fastnet Rock earlier this morning, being beaten to the finish line in the last breath of the race by her arch-rival Maxi Edmond de Rothschild.

As Maxi Edmond de Rothschild’s skipper Franck Cammas explained: “Just after they gybed onto the lay line for the finish we crossed them and decided to overlay. It was our last chance to see if there was something still possible. But until five minutes before we finished we never thought it was possible!”

Skipper of MACIF, Francois Gabart, the Vendée Globe winner and outright singlehanded round the world record holder, gave his side: “They gybed a little bit outside of us and I was thinking ‘it looks like they’re in a good position’. Plus they were going really fast downwind and even at the Lizard I was thinking ‘it’s going to be tough to keep them behind’. After the last gybe they were two miles away and we were between them and the finish so it looked good for us. But they were able to fly while we had a problem with our rake system and we couldn’t adjust it…”

The difference was that Maxi Edmond de Rothschild was able to foil into the favoured end of the finish line off Plymouth breakwater, whereas MACIF was not able to, crossing the line just 58 seconds after.

In fact the two giant Ultim trimarans were never more than four miles apart throughout the race although there was a near split as they appeared to make easy meat of yesterday evening’s wind transition zone into the new southwesterly breeze. As Cammas explained: “Before the start we wanted to go north, but after the start we got a new forecast which showed that the south was better. In fact MACIF gybed north and we hesitated but then decided to stay with them, because we wanted to race them. In fact on the northern route the faster you were the better it was. We were faster than our routing in the first bit because there was more wind, and faster than the polars because it was flat water.” 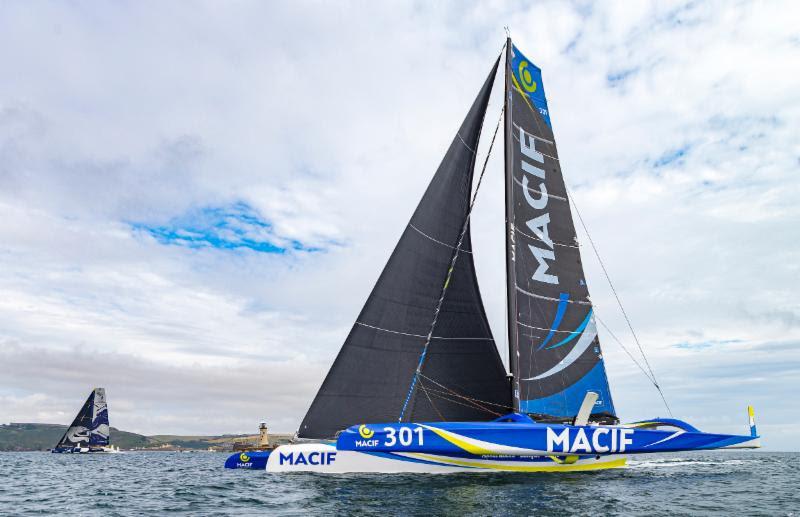 Beaten by a breath at the finish – MACIF, the leader since rounding the Fastnet Rock was pipped at the post by her arch-rival Maxi Edmond de Rothschild in the 2019 Rolex Fastnet Race – photo © Rolex / Carlo Borlenghi

For Maxi Edmond de Rothschild, their race had incidents. They went aground on the Shingles Bank at 25 knots while leading the Ultims out of the Solent destroying the tip of their daggerboard. Then a large fish got caught around their daggerboard just after passing the Fastnet Rock, requiring them to back down to extract themselves, allowing MACIF past.

While friends, there is strong rivalry between the two teams. As Cammas’ co-skipper and navigator for the race, Charles Caudrelier put it: “It is always good to beat Francois [Gabart] who is a very famous multihull sailor with a good boat and a good team. Our boat is sometimes faster in certain conditions, but they have improved the speed of their boat and they sail it very well. It was a big fight – great fun!” For their endeavours the Maxi Edmond de Rothschild crew won the line honours multihull trophy and were presented with a Rolex timepiece, ashore at Plymouth Yacht Haven.

Racing on board MACIF was Jimmy Spithill, the last minute replacement for Pascal Bidegorry, who stood down with a back injury. “That was my first Fastnet. It was quick – I probably won’t ever do it quicker than that!” said the America’s Cup winning skipper. “The power of these boats is incredible because they are big machines. With other foiling boats your limit is waves but with these, because of their scale and the shape of the foils, you can push them hard.”

Thomas Coville’s Sodebo Ultim 3 finished 1 hour 24 minutes after the leader, having been left behind by the lead duo in the transition yesterday evening and then when the leaders were first to the strong breeze crossing the Celtic Sea this morning. 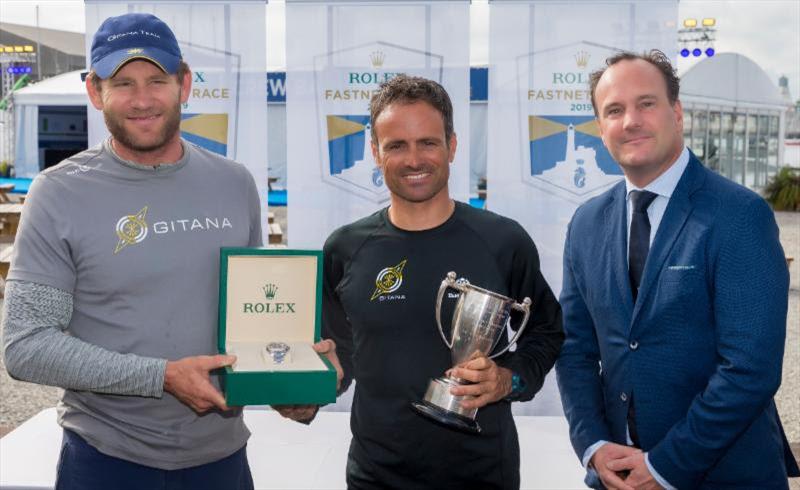 Further records to the Fastnet Rock fell this afternoon with George David’s Rambler 88 maxi rounding at 16:45:47 this afternoon. This beats the previous record, which the American maxi yacht team also set (however that time of 1d 4h 15m, established in 2011 aboard their previous Rambler 100, was overlooked at the time because just minutes later the keel fell of their maxi causing it to capsize.) Rambler 88’s new record has bettered the monohull record by, appropriately, 88 minutes. However the VO70 Wizard, campaigned by Baltimore-based brothers David and Peter Askew, is at present fastest to the Fastnet Rock under IRC corrected time and now holds a solid lead both in IRC Z and overall at this still early stage of the race.

The monohull frontrunners rounded the Rock in 25-30 knots, the biggest southwesterly breeze seen so far in this race. 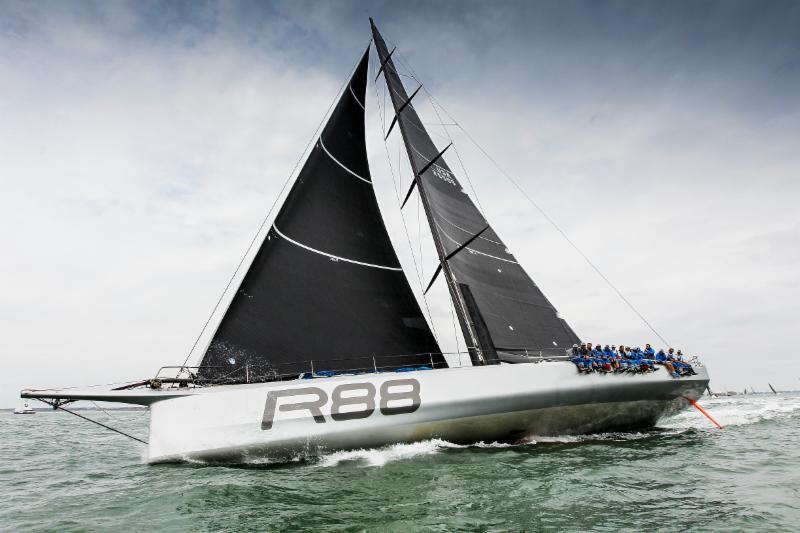 The next group to reach the Fastnet Rock will be the first IMOCA 60s where it is the new generation Charal sailed by Jérémie Beyou and Christopher Pratt which has pulled out an 8 mile lead over Sam Davies and Paul Meilhat on board Initiatives Coeur, approaching the rock neck and neck with Maître Coq, sailed by Yannick Bestaven and ocean racing veteran Roland Jourdain.

At an earlier stage of their crossing of the Celtic Sea towards the Fastnet Rock are the Class 40s. Here there is a three way neck and neck fight for the lead between Luke Berry’s Lamotte – Module Création, Arthur le Vaillant’s Leyton and Catherine Pourre’s Eärendil, the trio having finally shaken off the persistent and well sailed eight year old Pogo S2 Colombre XL of Charles-Louis Mourruau.

Inevitably the talented Frenchman Géry Trentesaux, overall winner of the race four years ago, and his JPK 11.80 Courrier Recommandé has pulled out a lead in IRC Two and late this afternoon was passing the Scilly Isles, about to set out across the Celtic Sea. Impressively, both Trentesaux’s yacht and Nicolas Loday’s Grand Soleil 43 Codiam have slowly extended away over the course of today and are already a long way through the supposedly faster IRC One fleet. 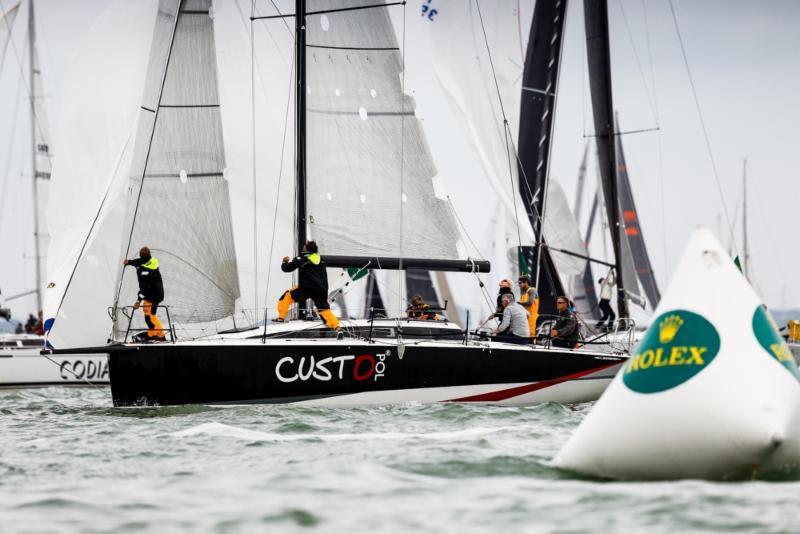 Still going well in IRC Three are Arnaud Delamare and Eric Mordret’s JPK 10.80 Dream Pearls, which were approaching the Scilly Isles this afternoon. However inevitably 2013 winner Alexis Loison, sailing with Jean Pierre Kelbert on the latest 10.30 model from Kelbert’s JPK yard, are on the ascent, up to second place under corrected time with doublehanded Olympic hopefuls Hannah Diamond and Henry Bomby on the Sun Fast 3300 Fastrak XII neck and neck with them.

Another stand-out performance is occurring in the smallest/slowest class in the Rolex Fastnet Race, IRC Four, where, still to the south of the Traffic Separation Scheme off Land’s End, perennial class winner Noel Racine’s JPK 10.10 Foggy Dew is extending away both under handicap and on the water. They are immediately trailed by sistership Gioia, formerly the Loison’s 2011 winner Night and Day and the Goodhew’s Sun Fast 3200 Cora.

The majority of the smaller classes setting out into the Celtic Sea tonight have a fast, breezy crossing ahead of them with reaching conditions in winds of around 20-25 knots.