The yachts headed for the Giraglia rock driven by a good crisp wind of about 15-20 kn.

After the suggestive Rolex crew party with 2900 guests on the Ponche beach, on the stroke of midday today the start procedures began for the long race of the 67th edition of the Rolex Giraglia. Regular starts for the impressive fleet that was split into four groups, with the smallest (Groups B IRC/ORC) leading the way, followed at 10 minute intervals by Group A, the group 0 and then the Giraglia X 2 entries.

It was thrilling as ever to see such a mixed fleet leave the quays of Saint Tropez head out of port for the long race: 241 miles with still uncertain weather keeping up the suspense that reigned on the quayside this morning. The word record was on many people’s lips, and many guesses were made about the chances of breaking the record of 14h56m16s set by Igor Simcic’s Maxi Esimit Europa 2 in 2012. In any case, the expectations on board the faster boats were for a race of less than 24 hours with good wind pressure dropping on the way back (for the bigger yachts). The weather outlook remains uncertain, anything can happen, especially with the stronger wind expected for Friday the 14th. Among those expected to stop the clock in under 15 hours are the big Maxis such as Rambler 88 and Magic Carpet Cubed – which again in this race can count on the tactical skill of Jochen Schuemann, helped by meteo guru Marcel Van Triest. 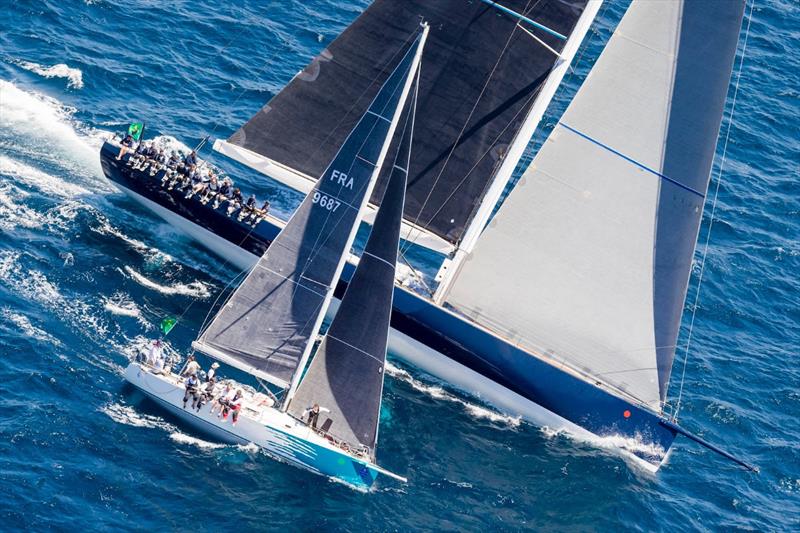 And also among the “small” yachts it will be interesting to follow the performances of Vincenzo Onorato and Patrizio Bertelli, both on board vintage boats; the 1974 Swan 38 Mascalzone Latino for the Neapolitan Onorato and the splendid Vanessa, designed by Giulio Cesare Carcano in 1975 with Mr. Prada on board. Patrizio Bertelli can count on a strong crew including veterans (the Brazilian Torben Grael, for example) and younger members coming directly from the Luna Rossa base in Cagliari. After the gun, the bigger boats quickly drew ahead on the leg towards the offset mark at the Formigue and then headed south-east for the long descent to Corsica. 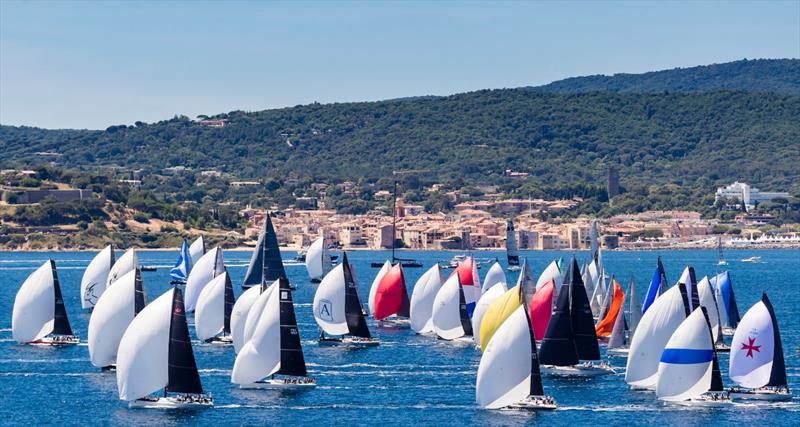 The finish for this edition is in the waters of the Principality of Monaco where everything is ready to welcome the fleet.

This morning on the dock prior to the midday start of the Rolex Giraglia’s offshore race there was much talk of stiff westerlies and the prospect of Esimit Europa 2’s seven year old record for the 241 mile race from Saint-Tropez being broken.

While the traditional course for this event – jointly organised by Yacht Club Italiano and Société Nautique de Saint-Tropez and supported by the International Maxi Association (IMA) – finishes in Genoa after rounding the Giraglia rock off northeast Corsica, this year it will finish at Monaco, for the second time since 2014. Rolex Giraglia’s offshore race is the fourth and penultimate event in the IMA’s 2018-19 Mediterranean Maxi Offshore Challenge.

At present the forecast indicates conditions will favour either very big, or very small, competing yacht. This is also the view of Volvo Ocean Race veteran Bouwe Bekking, who is competing on Argentinean Miguel Galuccio’s Vera. “If you make it to Monaco then you will be in fat city!” says Bekking, referring to the faster boats. “We might just miss it and park up – but you never know – we’ll just push hard.” Vera’s most optimistic routing has her finishing at midday Thursday ie with a passage time of just under one day.

The record breaking boat this year is most likely to be George David’s Rambler 88 – the American maxi’s IRC TCC is 1.871, while the next fastest this year, with a TCC of 1.776, is Sir Lindsay Owen-Jones’ Wallycento Magic Carpet 3, the 2015 overall Rolex Giraglia winner and 2016 line honours winner.

Navigating on board Rambler 88 is Silvio Arrivabene, who reckoned that they were likely to arrive at the Giraglia rock “before dusk” this evening and could cross the finish line in the early hours of tomorrow morning (Thursday): “There is a relatively fresh westerly, which will hopefully get us to Giraglia in the afternoon. It is downwind, so maybe we’ll put in a couple of gybes. Then we’ll come back on port tack all of the way to Monaco where we can expect the usual park-up. That will depend on if the westerly remains strong during the night.” 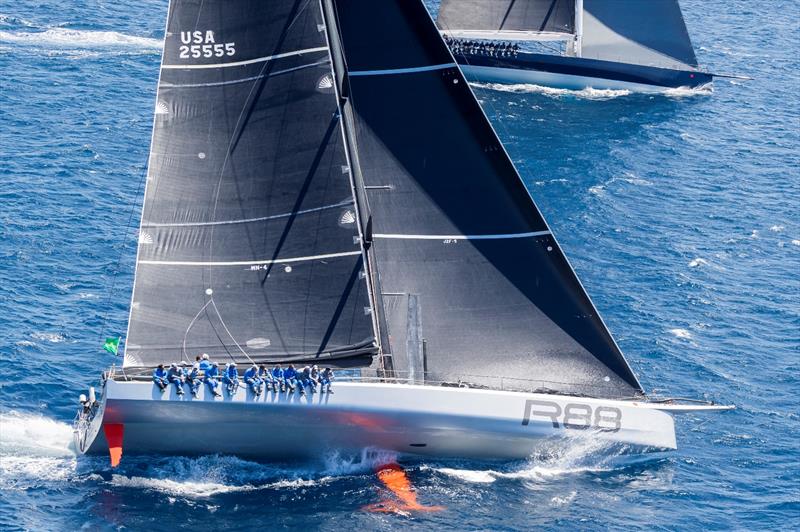 The significant difference this year is that the race finishes in Monaco, not in Genoa as it traditionally does. While the course distance is nearly identical, the inevitable park-up short off the finish should be less severe off Monaco, but also the course from Giraglia is 297 degrees rather than 346 degrees to Genoa. This will make for a fetch/tight reach from the rock to the Monaco finish line.

At present the record for the Rolex Giraglia stands at 14 hours, 56 minutes and 18 seconds, set by Igor Simcic’s 100ft maxi Esimit Europa 2 in the windy 2012 race. To break the record this time would require finishing before 03:31:18 tomorrow morning.

“It should be a quick trip,” agreed offshore racing legend Marcel van Triest, navigator on Magic Carpet 3. “We have a building moderate Mistral – technically a Tramontana. At the corner [the turning mark at La Formigue, a rock east of Cap Bénat] it will be building to 25-30 knots. Then we do one step down to get into the nugget of pressure that follows the coast offshore before we try to make the world’s longest lay line on Giraglia.”

Van Triest warns that there will be more breeze coming down from behind them, which could favour the 70 footers but equally could favour his yacht relative to Rambler 88.

Magic Carpet 3’s ETA at Giraglia is 2100, finishing in the early hours depending upon the state of the wind off Monaco. Van Triest believes that the fastest boats should arrive before the transition which will see the wind shut down before filling in from the northeast over the course of Thursday afternoon-evening. “The smaller boats will have a big choice – point at the mark or go 10-15 degrees low to find the transition and the shift.”

For the marginally slower boats there was less certainty. For Benoît de Froidmont’s Wally 60 Wallyño, navigator Gérald Véniard reckoned there was some 12 hours of variation between their best and worst case arrival time – from 1500 Thursday to 0300 Friday – but he was still excited. “We will round Giraglia at night – which will be a first for me. Usually it is during the day after.” 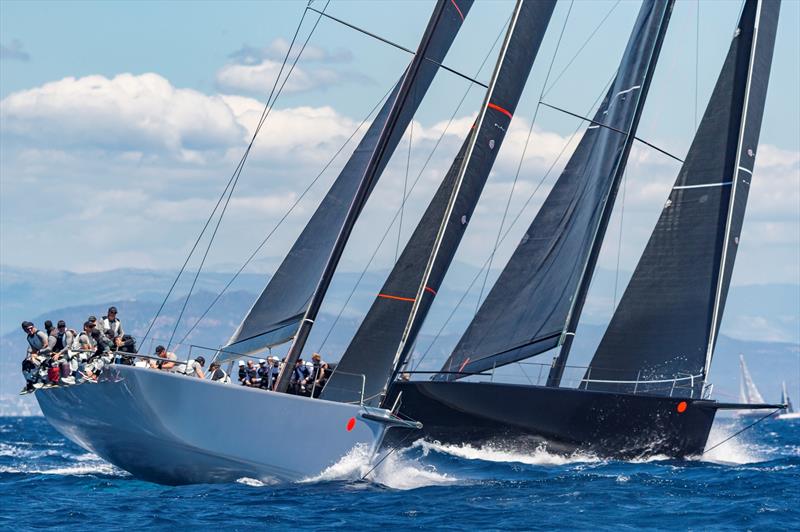 In event the start this afternoon from the Golfe du Saint-Tropez was unexpectedly light and downwind making for a magnificent array of colourful sails. However this was short-lived. As they exited the Golfe the fleet immediately ran into a giant header requiring them to drop their spinnakers hurriedly. Making the best of the start was Sir Peter Ogden’s 77ft Jethou, winner of the Rolex Giraglia inshore series. As she exited the Golfe she was being chased on the water by Alex Schaerer’s Caol Ila R with Rambler 88 holding third.

For the Rolex Giraglia’s offshore race, the maxi fleet has swelled with the addition of several entries that didn’t compete in the three days of inshore racing. These include Magic Carpet 3, fresh from winning straight bullets at the Loro Piana Superyacht Regatta, plus the biggest yacht ever to enter the Rolex Giraglia, the 54.64m Andre Hoek-designed modern classic, Marie and Malizia – the IMOCA 60 being raced doublehanded by German Boris Herrmann and Monaco prince Pierre Casiraghi, plus the Swan 651 Lunz am Meer, winner of the Regata dei Tre Golfi, the second event of the Mediterranean Maxi Offshore Challenge.

For more information on the International Maxi Association visit the website