Racing was delayed on the final day of Townsville Yacht Club’s (TYC) SeaLink Magnetic Island Race Week (SMIRW), as Principal Race Officer Denis Thompson and his crew waited for a five knot breeze to filter through, and Division 1 was finally away at 1305 hours.

Thompson really had his work cut out in the next to nothing and fluky breeze, forced to fly the AP ashore until midday. Arriving at the start area, the PRO finally devised three separate courses across the divisions so that everyone got a fair go.

An emotional and popular win in Division 2, as Wine-Dark Sea finally broke the second place barrier of previous years to score overall victory. Sydney owner, Peter Lowndes, was almost speechless when it registered.

“I can’t believe it, because everything has been a bit of a blur,” he said aboard the Lyons 49 this afternoon as the crew enjoyed a few French bubbles.

“The crew (mainly regulars) have been fantastic. Everything happened when it should. I’ve sailed on top boats before and those boats are quiet boats, and that’s what we had all week. I’m proud of them.” 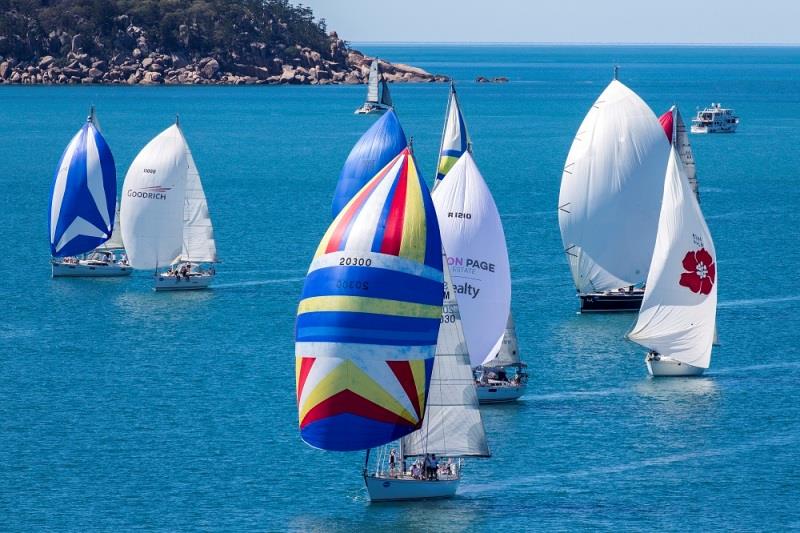 Lowndes said it was “the first time we’ve been called a lightweight flyer,” after finishing second today to win by two points from Ian Edwards’ Wings (NSW), and third placed Robbo Robertson (It’s Time); the Queenslander and his crew coming over to cheer on Wine-Dark Sea’s crew.

It was only when Lowndes crew played today’s song, appropriately Queen’s ‘We are the Champions’, that the tears flowed as they all remembered Lowndes’ partner, Sarah Goddard-Jones, who died in June. She would have loved to have been here sailing and celebrating the win. At tonight’s prize giving, someone will be awarded the trophy named in her honour.

Conditions looked dodgy during the day, with spinnakers collapsing in fading breezes, but it was just a tease, and back it came. Division 1 savoured the best of the day, as one of their marks was off the Strand at Townsville where 10-15 knots awaited.

Tim Campbell sailed over the top of this morning’s top three to win Division 1 from Newcastle’s Mako Sunglasses (Paul O’Rourke/Adrian Kiely) which had led going into the day. Campbell, from Victoria, left his comeback until the final race, in which he finished second to Tony Ritter’s Spank, crewed by Port Douglas youngsters.

“Conditions suited to us; upwind and downwind legs and no reaching,” Campbell said. “We were able to sail deep downwind, which is what suits us and clinched it,” he said. This is our second year here and we trail the boat all the way from Melbourne, so it’s great to have a win.”

“It’s well organised and a fantastic atmosphere. There was good competition and we love Magnetic Island and the lay day. We’d like to see AMS included next year,” Campbell finished.

Michael Unwin’s Fuzzy Logic won Division 4 by a solid eight points from Rod Finucane’s Fenina (Qld). “I think we just got lucky,” the Brisbane sailor said. “We got faster and faster as the week went on and conditions suited us – we are small and light and the big boats couldn’t get us.

“It’s a brand new boat, so it was a complete unknown quantity. I was just hoping we would get through the regatta without embarrassing ourselves, so to win is really great,” Unwin said.

“It’s been six or seven years since I was here last, but I was here for the very first one and won on Akarana. It’s been a fantastic week, unbelievably perfect weather,” he ended.

Smooth Operator’s owner, Charles Weatherly (Vic), used today’s worst result of fifth as his drop to win the Non-Spinnaker Division, but there were just two points in it. Bill Munro’s Centinela (Qld) came oh so close, but settled for second place.

Dennis Coleman discovered that father and son can be most successful when they sail together. Today they won the final race and thus climbed over the top of last year’s winner, The Boat (Graeme Etherton) to win the Multihull division overall. Coleman last won here in 2017. Both boats are from Townsville, so a local win.

“It’s always hard with handicap series, because you don’t always know where you are. There are other Beneteaus here; good yardsticks, but we never know till it’s over,” Clark said. “Most courses didn’t have any reaches and we don’t reach well, so that was a bonus.

“Race Management had done a great job all week. We haven’t been here before, but we’ve thoroughly enjoyed our first Magnetic Island Race Week. To travel all the way from Hobsons Bay (Victoria) and win, we are absolutely thrilled,” Clark finished. 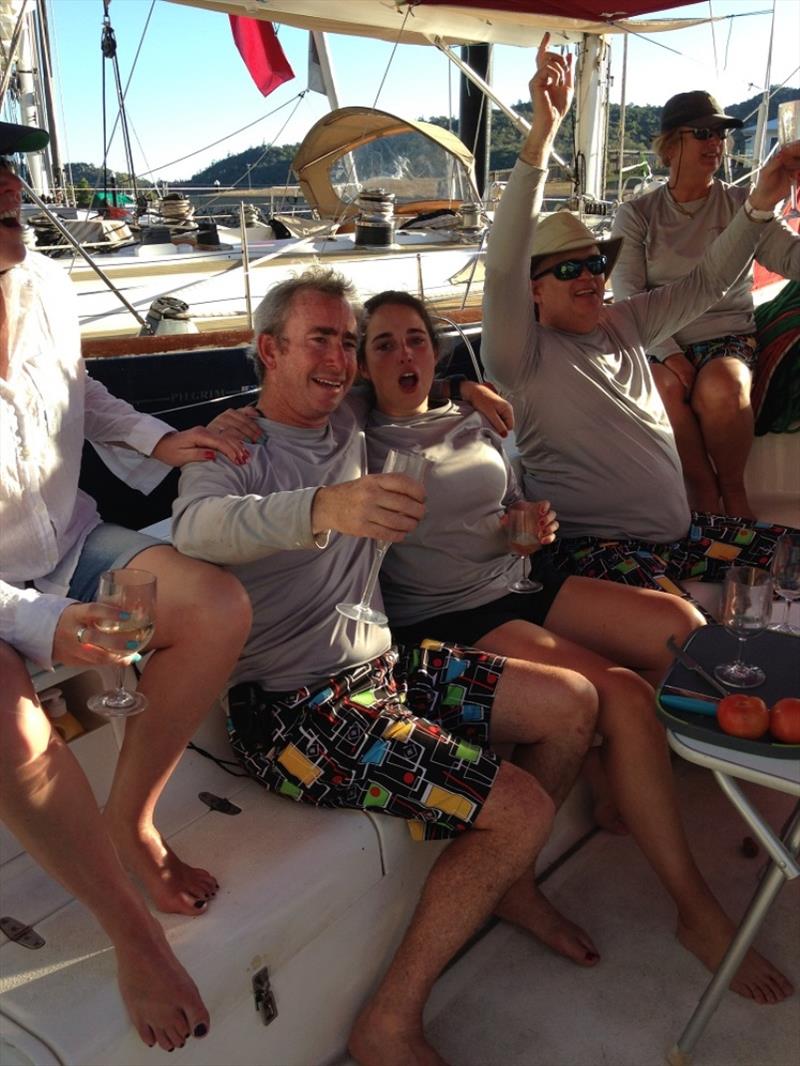 All good things must come to an end, and so it is with SeaLink Magnetic Island Race Week for another year. It was a successful one, with record entries and a waiting list of those wanting to experience the regatta everyone is talking about.

Event Chairman, Mal Pirret, said: “Townsville Yacht Club organisers are heartened by the continuing support of competitors for our event. We had a record numbers in 2019 and look forward to similar numbers next year. I would like to thank all competitors and the volunteers who help make SeaLink Magnetic Island Race Week a success each year. I also thank SeaLink and all our sponsors.” 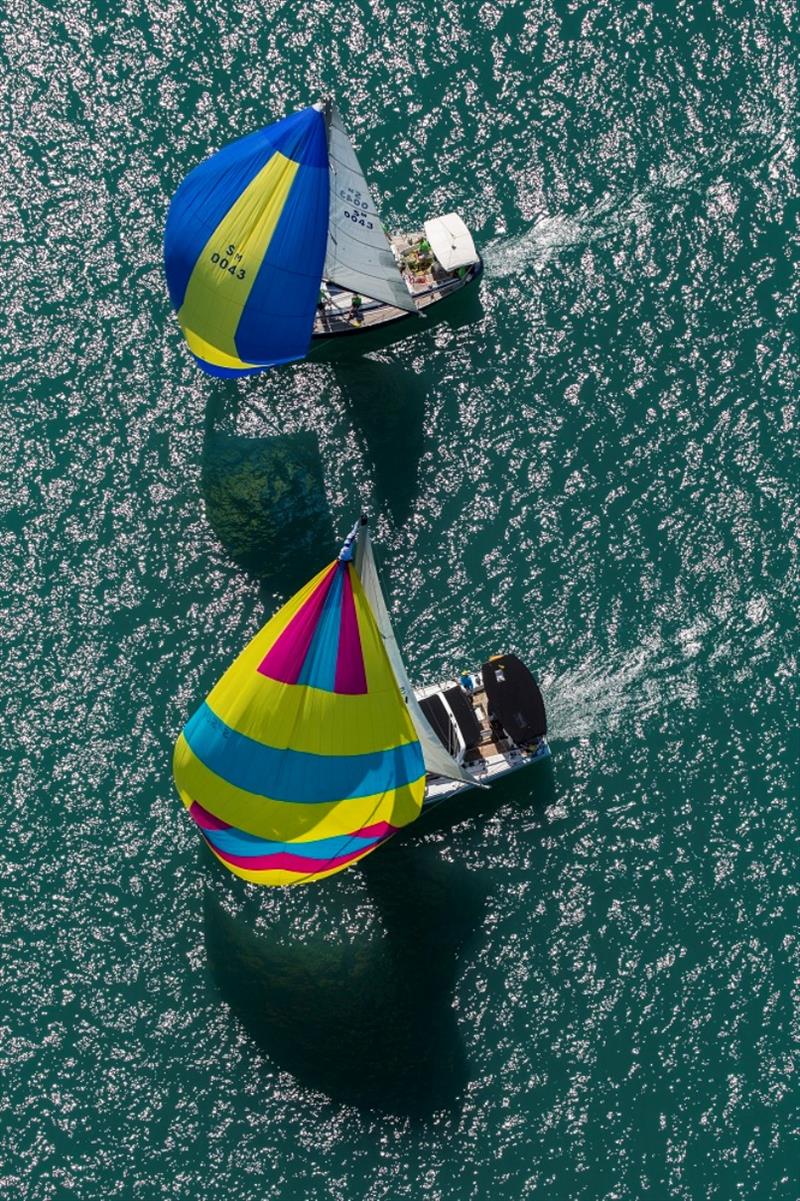