The 12th edition of St.Barth Cata Cup opened on Thursday, November 21. On this first day of racing, the 60 participating duos that expected to sail in light winds were finally able to enjoy winds of 8 to 15 knots.

However, the conditions were rather unstable in terms of force and direction, making it hard for some but perfect for others, such as Argentineans Cruz Gonzalez Smith and Mariano Heuser, sailing in the colors of Architectonik, who proved the steadiness of their performance in spite of wind variations, winning the first race and placing fourth in the second.

That put them first place in the overall standings for the day, as well as first place winners for the “Design Affairs-001” Prize, in front o f Jean-Christophe Mourniac and Antoine Rucard (Eden-Rock Villa Rental) and John Tomko and Jonathan Atwood (Boglioni), respectively placing second and third.

“With first and fourth places, we think the day was perfect and could not have hoped to have done any better to kick off the regatta, especially as we expected it to be complicated with fairly unstable winds from the west, atypical for Saint Barth. At the end of the day, we sailed well, especially during the first race. For quite a while we remained fourth or fifth, before moving up to the head of the fleet, as we saw those in front lose speed near the little islands, which allowed us to adjust our trajectory. During the second race, we didn’t have a great start, which forced us to tack to get going. After that, we made good choices, but faced small oscillations in the wind,” commented Cruz Gonzalez Smith, who proved his talent on this first day of racing, as well as his steady command of the situation, which gave him the leader’s position in the provisional standings.

“Things were distributed sort of equally today, and certain favorites in the race earned a few points,” added the Argentinean skipper, who placed third in the most recent Formula 18 world championships. He was alluding to Argentineans Pablo Volker and Sergio Mehl (St Barth Assurances), third in the last edition, but currently in 41st place this year after “a bad” 20th place and disqualification for a premature start, as well as current title holders, Belgians Patrick Demesmaeker and Olivier Gagliani (Les Perles de St Barth). The Belgians also faced a few woes during the first race, after tearing their trapeze, which caused them to capsize their boat. So in spite of their best efforts, they only placed 12th in that race, and finished in 10th place in the overall standings at the end of the first two races. Behind them are others who hope to claim ultimate victory, such as Jean-Christophe Mourniac and Antoine Rucard (Eden-Rock Villa Rental), John Tomko and Jonathan Atwood (Boglioni), as well as Tripp Burd and Charles Tomeo (Burning Torch), who all have the same number of points after the first two races. 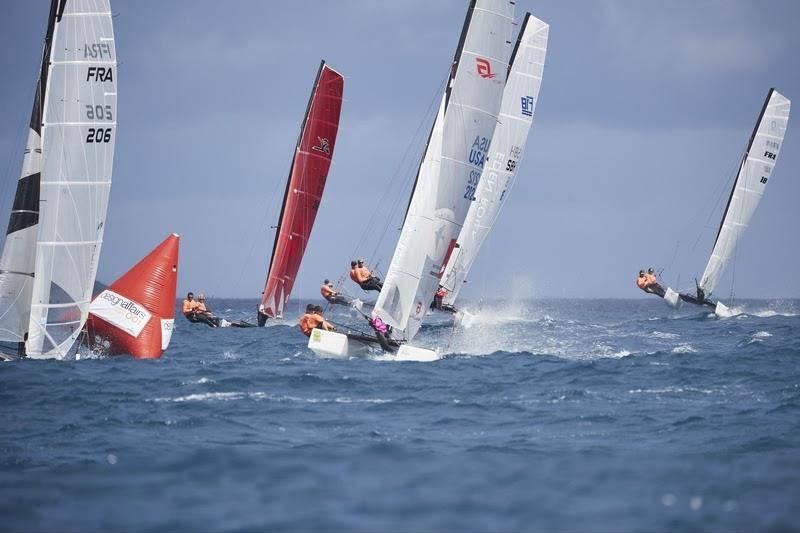 A Blessing in Disguise

“This morning, we got off to a bad start. We passed the first mark in 20th or 25th place, but we fought to come back and finished 10th, which is not too bad. This afternoon, the start was not typical, when leaving the committee boat it was possible to reach the first mark in one tack. The hiccup was that we were smoked by another boat and constrained from tacking to get the wind. At first, we clenched our teeth, but found that ultimately the detour gave us a better chance at the wind and a straighter shot than the others. As a result, we moved to the lead and stayed there,” commented Antoine Rucard, who was content to be able to resist the repeated attacks by Americans John Tomko and Jonathan Atwood, as well as Français Gurvan Bontemps and Benjamin Amiot (Eden Rock). “It was really tense right to the finish. The wind became more and more irregular and nobody gave up,” added Rucard, who was second in the most recent Tour Voile en Diam 24 OD, who proved to be constant in his sailing, in spite of the slightly odd conditions of the day. 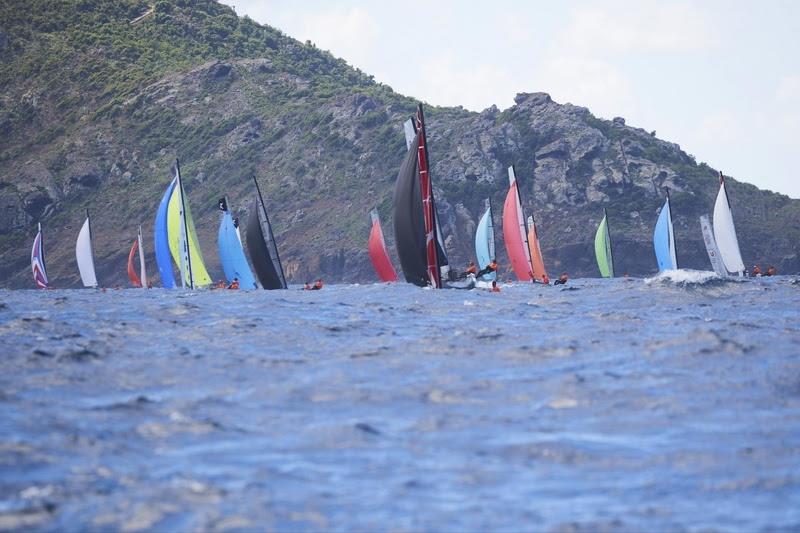 Stability: The Key to Success?

On the other hand, it was a little more complicated for some competitors who had trouble managing the air instability and the effects of site, but many of them still managed to make good shots. For example, the pair Orion and Antoine Martin (Mext Cardio) made a nice performance during the first regatta by winning the 2nd place. “Everything went really well. After a great start, we pulled all the right edges. Everything went perfectly well from start to finish. It was a bit more complicated in the next round because despite a good start, we did a little bit backwards then (16th). We are, however, happy with our day and the adjustments of the boat, “said the Toulonnais team-mate who is currently 8th overall. “Unlike my brother, this is my first time at the St.Barth Cata Cup and I do not sail much in F18. A place in the final Top 10 is a goal. To have fun is one too and that’s good, the conditions announced for this weekend promise a very good match, “finished Antoine Martin.