49erFX: Kiwis make a move on the podium

The Brazilians have shown remarkable consistency throughout the week, although even Martine Grael and Kahena Kunze put a slight blot on their pristine copybook with a 12th in the middle of three races on Friday. The other scores were a 5th and a 7th, however, which means the reigning Olympic Champions continue to hold a healthy 14-point lead over the second-placed team, reigning World Champions Annemiek Bekkering and Annette Duetz.

Alex Maloney and Molly Meech rebounded from a disappointing opening day to gold fleet racing with scores of 3,1,12 which lifts the New Zealanders to third place, displacing the British by a single point. After suffering a UFD disqualification the previous day for starting a fraction too early, Charlotte Dobson and Saskia Tidey will have to carry all their scores from today, 10,23,3. The Brits will have to keep a close eye on the chasing Norwegians, defending European Champions Helene Næess and Marie Rønningen whose 4,4,6 scores were the most consistent of the day. The only other crew to keep all their results inside the top 10 were last year’s Junior World Champions Vilma Bobeck and Malin Tengstrom who lie in 6th overall after today’s solid scores of 8,3,9. While all the teams ahead of them are seen regularly on the podium of major 49erFX regattas, the young Swedes are looking more and more comfortable competing alongside the world’s best.

Today’s conditions out in Weymouth Bay were stronger than forecast, and as yet the sailors have hardly had to bend their legs. The forecast continues to predict a much lighter concluding weekend which could shake up the pack. Whether or not that is sufficient to threaten the Brazilian lead, however, we’ll have to wait and see. 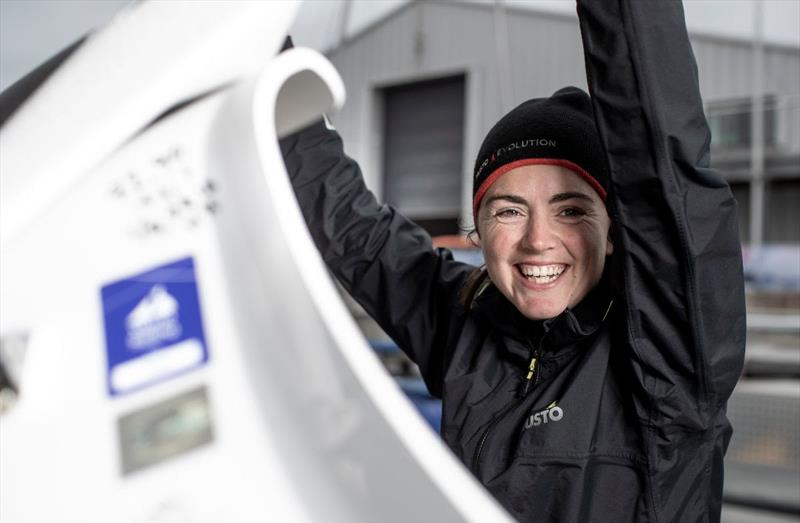 The conditions for the 49er gold fleet were full power all day, 10 to 14 knots of easterly breeze out in Weymouth Bay. However, there were significant lines of gust and lull across the lumpy course, with a few wind shifts thrown in for good measure. Peter Burling and Blair Tuke managed to negotiate the pot holes with a very solid 6,4,2 which moves them back into the lead, 7 points ahead of the Spanish, Diego Botin and Iago Lopez, who scored 8,12,6. “We were starting well,” said Botin, “but sometimes a good start put you in the wrong place and we didn’t feel that lucky today. Still happy with how we sailed though. It’s very hard to be consistent all the time.”

Dylan Fletcher and Stu Bithell had one of the best days of anyone, 4,7,1 putting the third-placed British team further ahead of the chasing pack and just 5 points behind the Spaniards. In fourth is another British crew, James Peters and Fynn Sterritt who are plugging away with some very solid scores of 2,14,5. However it was the experienced German crew, Erik Heil and Thomas Ploessel, who had the best of the day with 5,1,4, which moves the 2016 Olympic bronze medallists to just 4 points behind the fellow Germans and training partners Justus Schmidt and Max Boeme. The other race winner of the day were France’s Erwan Fischer and Clément Pequin who move into 9th overall.

The top-performing crew of the previous day were Sebastien Schneiter and Lucien Cujean who slipped down to 10th after a disappointing day. But the conditions are forecast to turn a little more ‘Swiss’, with lighter winds on the cards which could suit this team and others that are more used to the softer end of the wind spectrum. 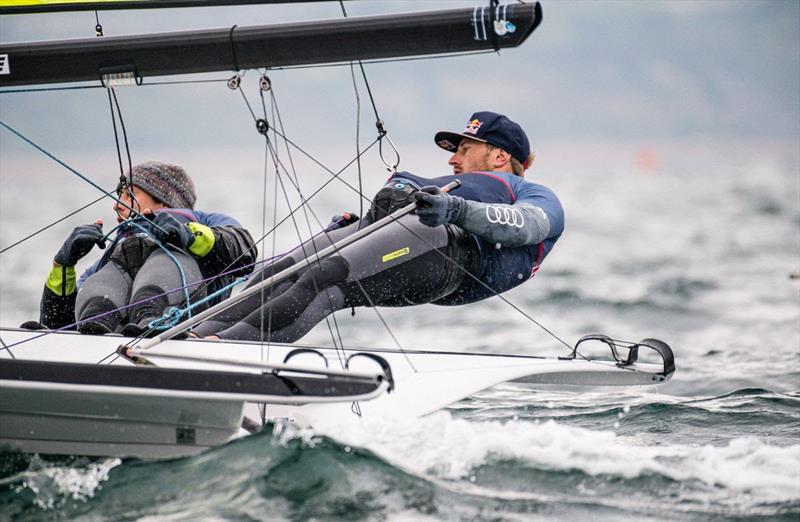 Nacra 17: Danes on a roll, but Champs Snap Back

The Nacra gold fleet held the inner harbor for today’s morning racing, and with the brisk Northeasterly breeze filling in overnight, the course would emerge as a tricky test of 3-lap racing for the catamaran sailors.

The Danish team Cenholt/Lubeck held second going into the morning, after a stellar first day of gold fleet racing where they’d scored a 3,2,1. They continued their run with a spectacular first race, starting near the pin, nailing the port lay line and rounding the top mark first to run away with the win and into the overall lead. GBR showed the depth of their squad with Rashley/Giovanetti winning the pin to round 2nd at the top, though they slipped to 5th by race end. Regatta leaders GBR’s Gimson/Burnett and 3rd placed ITA’s Tita/Banti both faltered, scoring 23rd and 13th respectively, but four races meant the first gold fleet drop came into play.

The second race of the day had more mixing up of the fleet as well as the wind strength. A huge call at the start had the Germans Polgar/Werner port tack the fleet to head out right, but the top left paid off for FRA’s Vaireaux/Ancian, who had come into the day in 20th position. They led for most of the race before slipping to the Italians Tita/Banti after a split on the second upwind. The tradeoff of the left positioning on the race course versus the bad air of the spinnakers had gone in favor of the Italians, who had split right at the bottom mark, and into the lead for the race, and then the regatta, as behind them Cenholt and Gimson finished 14th and 15th across the line. The aussies showed their squad can still perform even without Waterhouse/Darmanin, with Lisa Darmanin’s brother Paul taking 3rd and the Outteridges finishing 4th.

The final race of the day the Italians proved they’re the team to beat, solidifying their previous win with another solid start in the middle and another well executed upwind to round the top mark first and never look back. The Brits looked like they had a full squad game plan of heading left, with three of their boats fighting for the pin and Saxton/Boniface winning the inter-country battle, rounding the top mark second and maintaining to the finish. Gimson/Burnet steadily climbed back through the fleet to secure 3rd for the race, thus stemming the bleeding to drop only to 3rd overall.

The three point spread this morning from 1st to 3rd has shuffled positions and become a 14 point spread, but as we saw today anything can happen out on this race course, and every team can perform well in races out there! 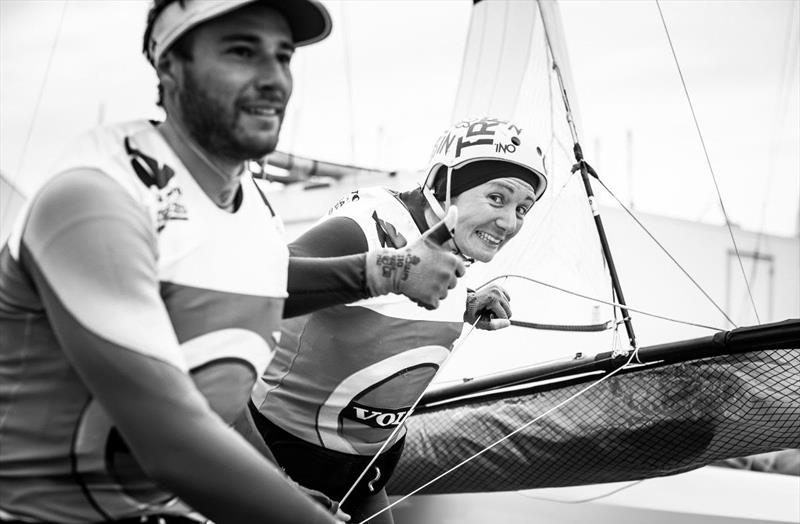