Clockwise from left: Challenge XII (KA-10) aerial; Challenge XII in action; New Zealand (KZ-3); and Enterprise (US-27) at the 12 Metre Worlds on Day

Two races in 11-14 knot breezes today proved that winning will be no easy task at the 2019 12 Metre World Championship hosted by Ida Lewis Yacht Club and organized by the International Twelve Metre Association’s (ITMA) Americas Fleet. Champions will be crowned in five divisions on Saturday after the completion of a nine-race series (weather permitting) that started on Tuesday in Newport, R.I. The fleet of 21 12 Metres from six nations sailed in the “upper Bay” north of the iconic Pell Bridge instead of “outside” on Rhode Island Sound where it was sailed for the first two days of the regatta.

The Grand Prix and Modern Divisions both saw extremely close racing that translated into slimmer margins on the scoreboard between first- and second-place positions.

Enterprise (US-27), helmed by Clay Deutsch of Newport, R.I. won both races in Modern Division to close the gap on leader Challenge XII (KA-10), owned and helmed by Jack LeFort of Jamestown, R.I. “In our morning meeting where we discuss goals for the day, I told our team ‘right now, the regatta is not half over, but tonight it will be more than half over, so we’ve got to scoop up some points,'” said Deutsch after racing. “We talked about how to sail the boat finer. We didn’t have enough coordination between the helm and the crew on main and jib, so we really worked on that today. It’s also amazing how your sailing IQ goes up when there’s flat water and breeze!”

Deutsch, who chartered Enterprise from the U.S. Merchant Marine Academy Sailing Foundation and whose team has not had as much time in the boat as LeFort’s, called Challenge XII the gold-standard boat. “We’re very much alive and still in it, but they are still in the driver’s seat.”

LeFort described Challenge XII finishing almost overlapped with Enterprise in the first race and how it wound up fourth in the second race. “We were approaching the first weather mark together with Enterprise when our jib sheet got caught in the traveler winch,” he said. “We had to take the top off the winch and by then everyone was gone.” Once its spinnaker was flying, Challenge XII fought its way back up through the fleet. It has a four-point lead over Enterprise, which is tied on point score with Courageous (US-26), which is in third overall. 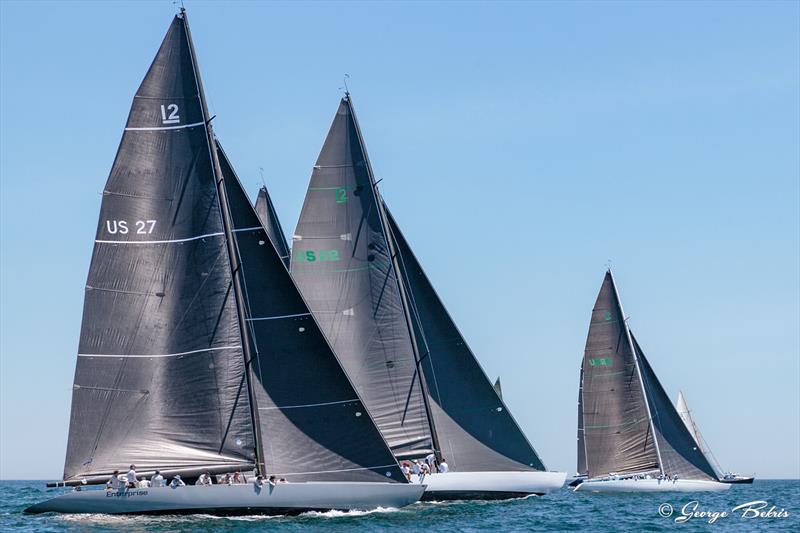 It was also moving day for Maggie and Gunther Buerman’s New Zealand (KZ-3) which posted a 1-2 today in the Grand Prix Division with Brad Read and Lexi Gahagan co-skippering. That closed the scoring gap to one point with Danish leader Legacy (KZ-5), which finished 3-3 today and was skippered by Thomas Andersen, with Jesper Bank calling tactics.

“We’ve been going well, but we weren’t getting the first shift off the line the last two days,” said Read, who also calls tactics on New Zealand. “The good news is we don’t think we’ve done our best sailing yet on KZ-3.”

Also in the Grand Prix Division, Kookaburra II (KA-12), a second entry owned and skippered by Patrizio Bertelli with Brazil’s Torben Grael on the helm, lost its outhaul in the first race and came back to finish second, then won the second race and currently sits in third overall.

Meanwhile, in the Traditional Division Columbia (US-16), helmed by Kevin Hegarty of Newport, R.I. and skippered by Anthony Chiurco of Princeton, N.J. posted finishes of 3-1 today to hold a two-point lead over American Eagle (US-21), sailed by the Eagle 2019 Syndicate, which finished 2-3. Nefertiti (US-19), owned and skippered by Jon Sears Wullschleger of Sarasota, Fla., had the best showing of the day, winning the first race and taking second in race two for a third overall.

Nyala (US-12), owned by Italy’s Patrizio Bertelli and skippered by Mauro Pelaschier won both of its races to dominate the Vintage Division. It holds a seven-point lead over Onawa (US-6), which is being sailed by Jim Blanusha, Steven Gewirz, Louis Girard, Earl McMillen, and Mark Watson of Newport, R.I. Onawa finished 2-4 today. 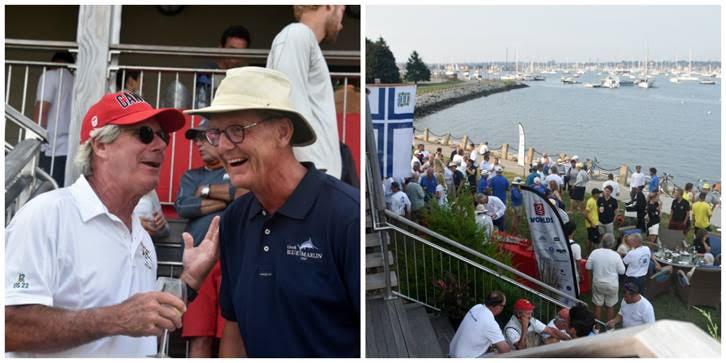 For more information on the 12 Metre Worlds visit 12mrworlds.com