Five more races in warm sunshine, flat water and a shifty 12-16 knot northwesterly off Lagos on day two of competition, and the leader board is starting to be defined at the GC32 World Championship, taking with the support of the City of Lagos, Marina de Lagos and Sopromar.

While four boats were separated by one point as day two dawned, now, at this half way stage of the event, two teams have edged ahead: Leader Alinghi and second placed Oman Air are now separated by just three points, six points ahead of INEOS Rebels UK in third.

While some separation may have emerged on the leader board, with Alinghi clearly top scorer of the day with no finish worse than a fifth, it was still very close on the water. “It was another tough day,” agreed co-skipper of the Swiss team, Arnaud Psarofaghis. “You couldn’t tell which side to go, but we also controlled the fleet to make sure we were ahead. We are really happy with what we’ve done. I didn’t start well, but the team got us back in the game.”

Team Tilt started strongly, winning the first race but followed it up with a 10th placed finish before reverting to solid results in the final three. “We had a good start in the second race but then I’m not sure what happened – we kept losing on the boats around us,” admitted Schneiter. “Otherwise, we pushed a bit more in the starts, where yesterday we lost a lot of ground. Today we felt able to race the other boats.”

Getting the best start and leading into the reaching mark set Team Tilt up for their race win, but this was one of the few occasions this happened today. “It is hard because the wind was so shifty. It is never over until the last reach,” observed Schneiter. 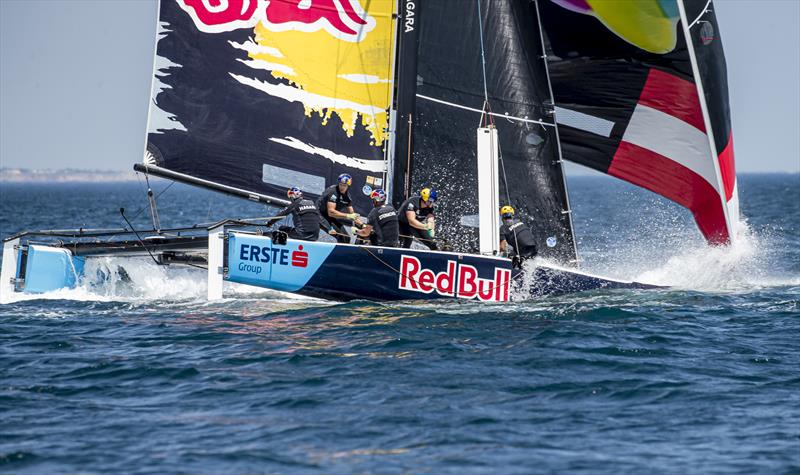 Even in race three, when Team Tilt was OCS (along with Red Bull Sailing Team, CHINAone NINGBO and NORAUTO) they recovered to finish second. This race was won by the Adam Minoprio-skippered Oman Air, which gained the lead after pulling off a superb foiling gybe on to the lay line out on the right side of the course.

Team Tilt was not alone in having an up and down day. Fourth at the beginning of the day, NORAUTO’s leaderboard position plummeted after posting an 8-6-10. However her subsequent ascent was even faster, winning the final two races, seeming to do well at the top left of the course. “It was down-down-down and up-up-up, I don’t know why…” mused Franck Cammas. “We had two OCSes, but even with those we never managed to come back. It was all small mistakes…”

In the final two races, Cammas seemed to have got the measure of the course, but he did not see it that way: “It was not so clear. We found a good trajectory and our starts were a little bit better, which always makes it easier.”

While the top teams are slogging it out, the leader board is also getting established lower down the fleet. Switzerland’s Christian Zuerrer of Black Star Sailing Team is enjoying the competition despite being in tenth place, which in this ferocious fleet is not surprising given this is only his second event in the flying one design catamaran. “Our goal is that we come back happy from sailing and we enjoy every single second,” he said. “Today was only our fourth day racing in these conditions and we had some better results. We are really happy and are still improving.” In today’s second race they came home fifth. 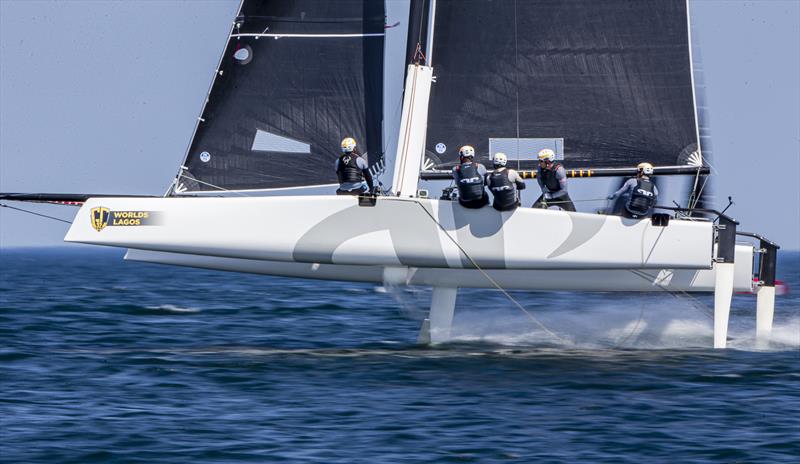 Zuerrer thanked the Clube de Vela de Lagos, which is supplying many volunteers, including some of their junior sailors as budding race officials. “It is a great club – they have done a great job for races. A huge thank you to all the volunteers.”

Day two was marred by the capsize of Jason Carroll’s Argo on the last run of the final race after some close racing with Red Bull Sailing Team for which the Austrian team was penalised two points for hard contact, ultimately retiring.

Fortunately with the rapid arrival of the GC32 Racing Tour safety team and Argo’s own support team, the crew was safely recovered and the upturned catamaran righted in a matter of minutes. During the incident tactician Sébastien Col injured his ankle and was taken ashore and subsequently to hospital, where this evening he is recovering.

Tomorrow racing is scheduled to start at 1300 but in marginally lighter conditions. 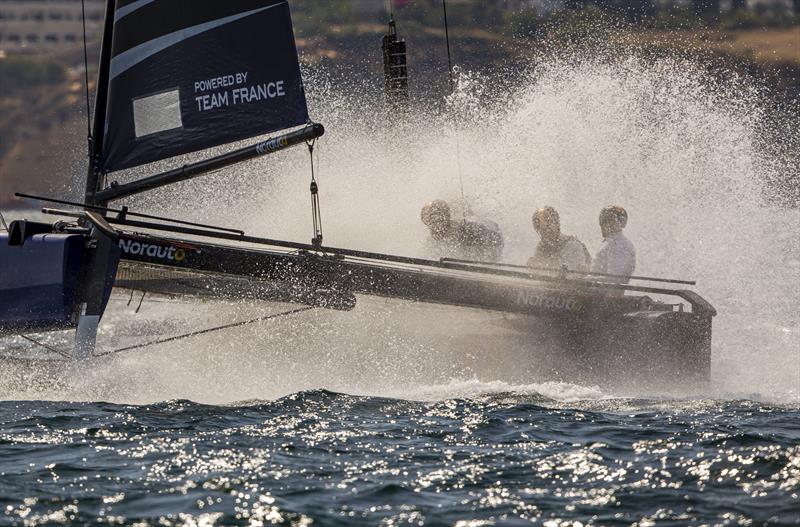