At approximately 0300hrs (AEST) on April 4, Lisa Blair issued a PAN PAN 895nm south of Cape Town when in 40 knot winds and seven metre swell her boat Climate Action Now was dismasted after the port shroud broke in a knock down. Her position was reported as 048:38:384 S 022:31:430 E. Search and Rescue in Cape Town have been notified and will provide assistance if required.

Lisa is well and uninjured. She was on her 72nd day at sea attempting to be the first woman to circumnavigate Antarctica solo and unassisted. No further information available at this stage.

Editor’s note: We extend our best wishes and commiserations to Lisa – she will be so upset.

Blair’s spokeswoman, Tracy Whittaker said, ‘Unfortunately her record attempt has come to an end. I spoke with Lisa not long ago and she’s obviously very disappointed. She was on target to break the record for the solo circumnavigation of Antarctica, but unfortunately she has suffered this situation. She’s currently sitting in winds in excess of 40 knots and swells somewhere between nine and seven metres.’

‘She’s waiting for daybreak to assess the damage. Her priority is to secure the boat and keep it as secure as possible. Once she gets into daylight — it’s currently around 11:30pm — [she will] make an assessment and all going to plan will be in a position to motor to the nearest port.’

Blair had hoped to break Russian adventurer Fedor Konyukhov’s world record of 102 days, 35 minutes and 50 seconds for circumnavigating Antarctica solo, non-stop, and unassisted She was also attempting to become the first woman to manage the feat and had been expecting to return to Albany towards the end of April.

Her planned 16,000-nautical-mile voyage was being undertaken in the Robert Hick designed and built 50-footer she had renamed as Climate Action Now (nee Funnelweb), to raise awareness of the impacts of climate change. 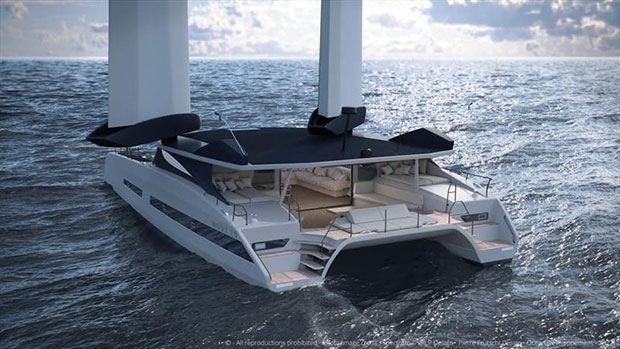