Foiling Awards, organised by Foiling Week, are the greatest recognition a foiling boat can achieve worldwide.

The prize categories are broken down into different categories such as production series, upcoming designs, racing, etc. The public gets to pick the winner for each category, and the mere fact of getting shortlisted is in itself worthy of international prestige.

Shortlisted for the Design category is one pioneering initiative, the Mothquito, which boasts an innovative design aimed at foil sailing from its inception with its Increased Foiling System (IFS). Patented by the company developing the Mothquito, IFS Foiling, the IFS design extends the dynamic length and beam on flight, affording greater performance and stability compared to it’s hull size.

The Mothquito is a foiling dinghy 3.05m long and 1.8m wide that can be transported on a roof-rack. Once in the water and with the foils deployed the equivalent length on flight becomes 5.5m and its dynamic beam reaches 4.8m, which allows the Mothquito to punch above its weight.

Even with its light carbon fibre construction, the righting moment afforded by the wide dynamic foiling beam means it can be balanced with little effort. Designer Toni Blanc explains its 15m2 sail surface area might seem somewhat aggressive for a 3m dinghy, but that thanks to this IFS system it is in fact rather moderate.

The organic shaped twin scow hull is a planing design with a surfboard style upcurved flat nose and a lift tunnel to help reach flight, keeping surf to flight transition as smooth as possible. The wing hull has been designed to provide a hover-like “Ground Effect” in order to spread the lift force across both water and air mass with more stability.

From the base of the mast to the aft the flat decking allows plenty of manoeuvre space, footholds spanning longwise on either side give the pilot plenty of hiking, travel and pivot points during high speed tacks.

The Mothquito has hiking wings similar to the Moth’s, in order to avoid the use of a trapeze which can be dangerous at higher speeds.

After 3 years developing foiling systems Toni Blanc and his team set out to achieve a design that would improve lengthwise and transversal stability, performance and safety. They have now been granted patents for this design and have named it Increased Foiling System, or IFS for short. 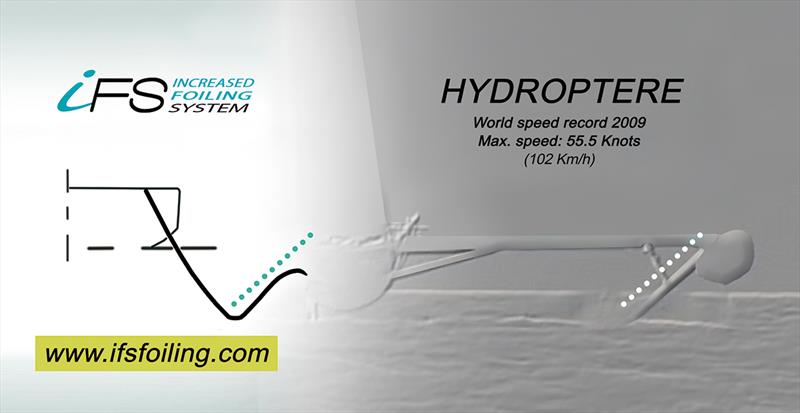 The Mothquito uses large outward facing V shaped foils with “double lift” that increase its dynamic beam by 250% over its hull beam, affording greater transversal stability and righting moment. With less heel the ride also becomes safer and more comfortable. IFS point out that most foiling catamarans in races such as America’s Cup or Red Bull Youth America’s Cup, use J shaped foils, which are essentially inward facing V foils (under water).

V shaped foils have the great advantage of self regulating flight without the need for flaps or sensors. The way they work is that as the speed increases so does the lift across the full section of the V foil, causing it to rise up toward the the surface until the weight of the craft can keep the foil from surfacing completely, leaving enough of the V foil submerged at this point that it produces just the right amount of lift needed. To put it another way, if the boat rises too far the submerged section of the V provides less lift, and if the boat descends, the submerged V section increases providing greater lift and rising the boat again.

The V shaped foils by on the Mothquito have winglets to help with the initial lift from surf to flight acting as an aileron until it reaches the surface, which IFS have dubbed “Double Lift”. They are also designed to minimising drag, reducing the turbulence caused by the hydrofoil’s tip vortices.

As Toni Blanc explains, when a hydrofoil boat is sailing in traditional displacement mode, it uses its entire waterline length to give it buoyancy. However the moment it breaks into flight mode the foils become its lift points while the centre of gravity remains the same. If the main foils are set amidship or even slightly aft as is with many designs, the resulting distribution of forces leaves the bows suspended in the air without any support to take the moment, creating an imbalance especially downwind, where the velic thrust increases the risk of pitch-pole. The distance between fore and aft foils determine its dynamic waterline length, and this is an important factor that affects length stability. 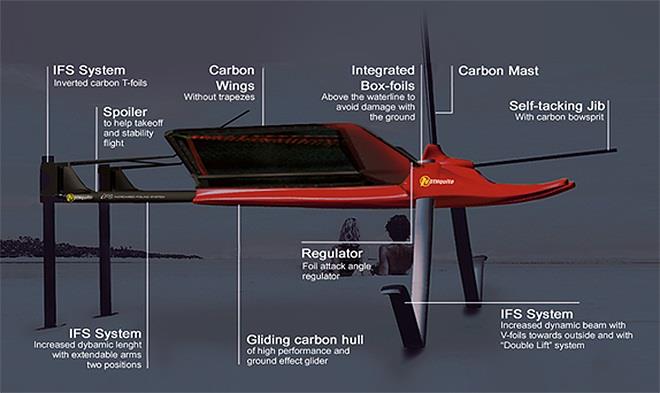 The Mothquito with its IFS design, sets the V foils forward and moves the rudder T foils further aft by up to 50% of the boats waterline (giving it a 5.5 m length on flight including the bowsprit), what it allows with downwind delay the position of the crewman more aft for a better longitudinal trim.

This increases the Mothquito’s dynamic length stabilising its pitch on all courses and wind conditions. The scow bows design provides an smoother recovery by bouncing back from any sudden loss of lift, reducing the risk of pole pitching.

In short, this is one surprisingly fast and easy to handle flying cat suitable to sailors of all levels, even those who thought they’d never have the skills to fly a boat.

With its increased dynamic dimensions and improved all-round stability the Mothquito design can punch above its length, with performance, handling and speeds found in larger craft.

At this point there are no other designs like the Mothquito, so a graphic comparison can help us see the where it stands in regards to existing classes including dynamic dimensions.

With its long outward facing V foils, its aft-rigged T foil rudder set up and its hiking wings instead of trapeze, Toni Blanc settled on the name Mothquito for the class, as a combination of the International Moth class that initially inspired the designer and the craft’s resemblance to a mosquito. 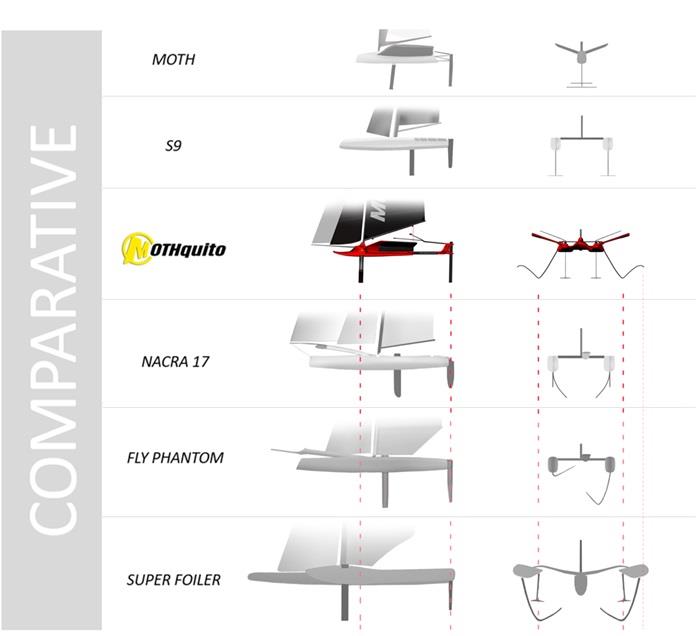 The Mothquito presents itself as a highly stable, easy handling performance dinghy that’s suitable for sailors of all levels. Currently in first prototype phase, the Mothquito is being tested in Valencian waters with the enthusiastic support from the Valencian Sailing Federation (FVCV) and the Javea Yacht Club (Spain) for this unique design which has been shortlisted for the Foiling Awards 2018, alongside great names like the America’s Cup AC75, the Swan 36, the Nacra 15, the 10 ft pocket foiler and Philippe Briand’s Flyacht.

Here is the link for you to vote in the Foiling Awards 2018 until the end of December: www.foilingweek.com/pages/season-2018/fw-awards-2018 (You will find the candidacy of Mothquito in the Design category).

The winners will be announced at the Foiling Awards ceremony in Milan on the 29th of January 2019.

Kudos to the Mothquito for making it to this prestigious award’s shortlist. We wish great success to this exciting IFS design.

Have a fast flight and best of luck Mothquito! 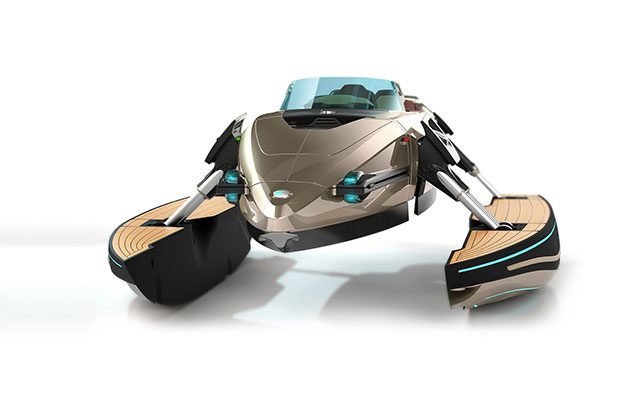 In the history of unique boats nothing comes close to the Kormaran ...