Posted by: YachtBoatNews in Cruise Shipping 02/07/2017 Comments Off on Queen Mary 2 arrives in New York 35 Views

The Queen Mary 2 won the The Bridge – Centennial Transat in the small hours of Saturday morning, crossing the finish line under the Verrazano-Narrows Bridge at 05:00 before bathing in a flawless dawn in New York Bay.

For most of the 2,200 passengers on board, this was more than a race and more than a crossing. And for a few, it was a personal bridge to the events of a hundred years before that this event is commemorating, when American soldiers arrived on French shores, often on repurposed ocean liners, from 1917.

Anna Boissier, born Sentman, was raised in Fawn Grove, a small town of 500 people in Pennsylvania. She studied in France and later married a Frenchman – Alexis, the son of the family she had stayed with in Paris. She is 42 and has spent 21 years living in France, now, in Issy-les-Moulineaux, a southwestern suburb of Paris.

Last February whilst looking into her genealogy she discovered that her great-grand uncle, Eli Sentman, had been one of the American soldiers that joined the American Expeditionary Force sent to France. That discovery had come during looking further into her roots.

“The reason I came on this trip was that I’m American; I’m 42, I’ve lived 21 years in both countries, and I really wanted to understand the distance between the two countries and continents,” Boissier said. “Also, I thought it would help me understand how my ancestors had come to America. Seven generations ago on my father’s side of the family there was a gentleman called Lorenz Sandmanm, who came from the Baden region in Germany. He travelled up the Rhine and sailed on a passenger ship in 1752 to Philadelphia becoming part of the German Lutheran community there.”

Sandmann became Sentman, and his descendant Eli was a railway mechanic. He joined the CO B303 Bn Tank Corps on May 3, 1918 and after training at Camp Colt, Gettysburg was promoted to sergeant and travelled with the American Expeditionary Force to Worgret Camp, Wareham, Dorset, England – a British tank base, in August 1918. From there he sailed to Neuvy-Pailloux, France in October 1918. He was in Montierchaume in December and then to Faugères in February 1919, before returning home from Marseilles on March 1, 1919 and mustering out in April.

“His experiences in Europe and the war brought him respect and opened his eyes to the opportunities in America and that also applied to his family,” Boissier said. Sentman returned and opened an automobile concession – Sentman Motors – in Philadelphia and employed Boissier’s grandfather, “who he also ensured had an education at Tome Boys Schools in Northwest Maryland,” Boissier said.

Her grandfather would later serve the US Navy in the Asia Pacific during World War II.

Boissier has made the voyage the other way across the Atlantic after leaving Saint-Nazaire on Sunday with 14 of her French family, including her husband, in-laws and many cousins. And in New York she will be reuniting with her mother and one special America cousin – Eli Sentman V, who is the same age that Eli I was when he went to war.

Stories like Boissier’s are part of the real remembrance of our wartime past, but for her they also point to a future and the need for mutual understanding between communities and countries. “We build too many walls and not enough bridges,” Isaac Newton said, understanding exactly the twin forces that mankind struggles with. Boissier’s story bridges Germany, America, France and Britain over the centuries. It is a story of humanity, often forgotten and played out over a timescale that society loses perspective of.

Bagpipes played the QM2 in across Hudson Bay and a choir made up of the ship’s entertainers sang “Amazing Grace” onthe stern of deck seven.

This is an event that does want for symbolism of the relationship between France and America. Boissier, travelling back home and at the same time retracing her ancestor’s route across the Atlantic one hundred years before, watched Manhattan Island approach as the QM2 passed the Statue of Liberty, that gift to New York from the French in 1885.

Meanwhile, back in the Atlantic, Macif (François Gabart) had stolen a march on his rivals among the four trimarans left behind by the QM2. At the 19:00 ranking (French time), Macif had more than doubled her lead and was 89 miles ahead of Idec Sport (Francis Joyon), 123 miles ahead of Sodebo Ultim’ (Thomas Colville) and 494 miles ahead Actual (Yves LeBlévec). Macif was reaching in southwesterlies and making 23 knots, but has 774 miles to the finish with much uncertainty still in the forecast for the approach to New York. 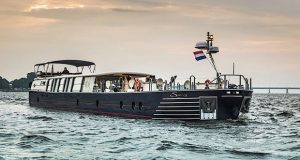