While the RORC Easter Challenge is on the one hand a training regatta offering free world class coaching from grand masters like Jim Saltonstall, it also kicks off the Royal Ocean Racing Club’s domestic racing season.

At present inshore racing is going through a halcyon period in the UK with the return of grand prix racing in the FAST40+ class and the more attainable Performance 40s. The former started with boats such as Ker 40+s and GP42s but has since evolved its own purpose-built hardware as exemplified by Niklas Zennström’s Rán 7. While the FAST40+ has an IRC TCC rating band of 1.210-1.270, the Performance 40s are heavier displacement IRC boats with a TCC range of 1.075-1.145.

Both will be out on the Solent in force for the RORC Easter Challenge over 19-21st April. 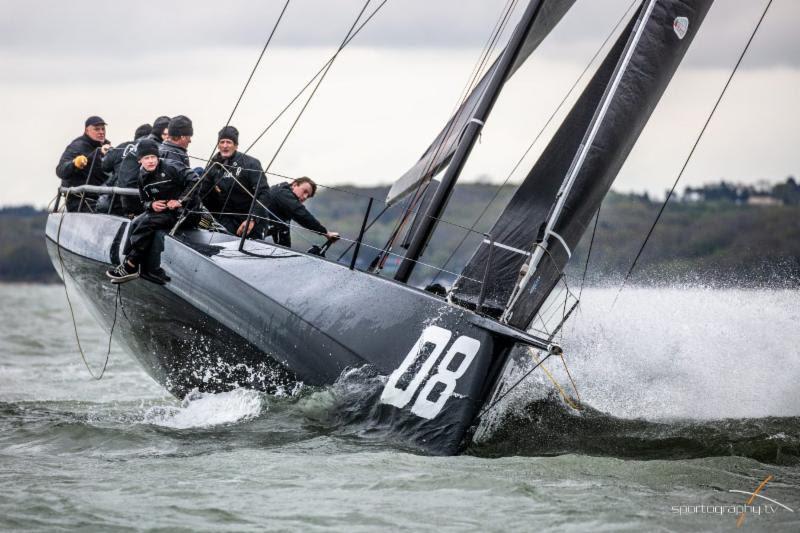 Niklas Zennström’s Rán FAST40 will be out on the Solent for the RORC Easter Challenge – photo © www.sportography.tv

Seven FAST40+s are expected, including 2018’s stand-out performer, Rán 7. Meanwhile Johnny Vincent’s Pace has been rechristened Arabella and is being campaigning by Niall Dowling, who famously last year scored the Volvo Round Ireland Race ‘double’, winning both on elapsed time and corrected.

“For a while Ed thought it was too much of a step-up in terms of crew and budget,” explains Fishwick’s long term right hand man, Nick Cherry of their move. “But we saw them racing and it was really our next obvious step – it would be fast, fun, worth a try.”

This season Redshift has a big program including the FAST40+ circuit, but also RORC offshores, although not the Rolex Fastnet Race. Cherry explains: “It is not the ideal boat for going offshore for a long period. It has plenty of holes in it – you can’t stop the water coming in, you just have to get it out efficiently…” 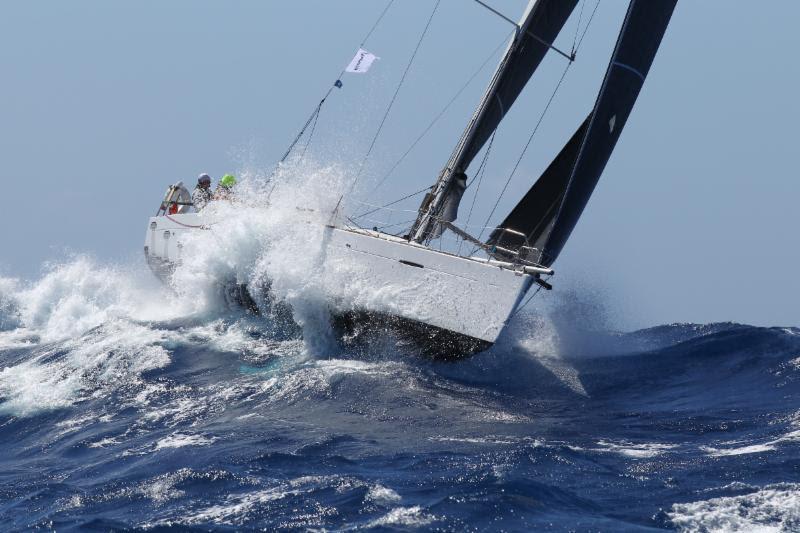 Susan Glenny will make great use of the coaching during her 4th RORC Easter Challenge competing in her First 40 Olympia’s Tigress – photo © Tim Wright / www.photoaction.com

The coaching facility at the RORC Easter Challenge will enable the crew to fast-track working up their new steed. “We have always found the coaching to be important – it is definitely good to get eyes off the boat,” says Cherry. “For example I’ve never before been involved in string drops. It is hard to get a good camera angle filming that on board, so getting video from off the boat will really help.”

In addition, progressing from the Sun Fast 3600, which Cherry says he could sail singlehanded, to one reliant on a full crew, is going to take some work. “With this you need seven out of 11 doing exactly the right thing at the right time to do it well.”

While seven FAST 40+s are competing at the RORC Easter Challenge, nine Performance 40s are currently entered. As usual these are topped by the duo of King 40s – the Blair family’s Cobra and Roger Bowden’s Nifty – and also Tom Kneen’s JPK 1180 Sunrise, the trio of J/Boats – Journeymaker II, Red Herring and Jackhammer – the Ker 39 Rumbleflurg, plus the two First 40s La Réponse and Olympia’s Tigress. 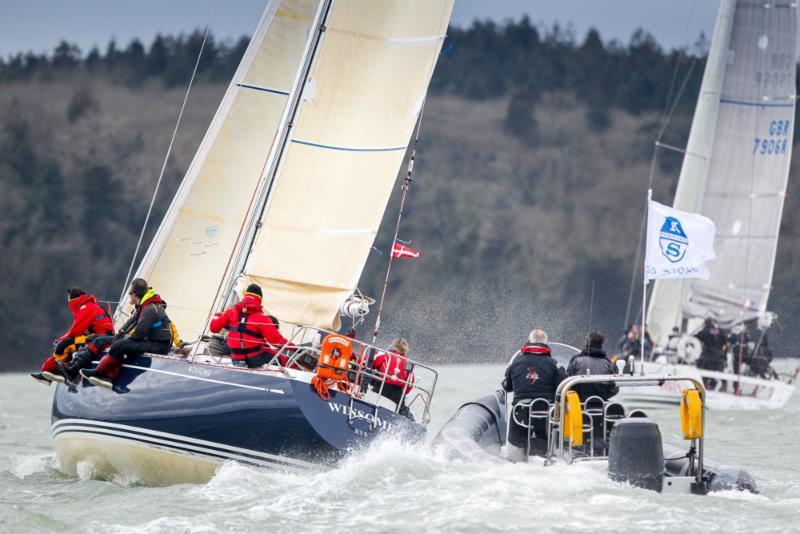 Susan Glenny and her crew on Olympia’s Tigress return to the RORC Easter Challenge after a hiatus – typically they are in the Caribbean over Easter. This season they have remained in the UK to focus on their Rolex Fastnet Race campaign.

Olympia’s Tigress made its Performance 40 debut at the end of 2018 and Glenny is enthusiastic about the class: “It was awesome – great racing. You come into downwind marks with 10 other boats – it is really, really close.”

This will be her fourth Easter Challenge and she and her crew make great use of the coaching: “Having the guys out in the RIBs is amazing because, while I didn’t get off, you can send the main trimmer off into a RIB to look at your set-up. Or the coaches come round and will say ‘I think this set-up is slightly wrong’ – which is really good. Then once ashore you can view the video downloads. It is really easy to make changes when you can see your boat from a RIB. That is a really good element of the event.” 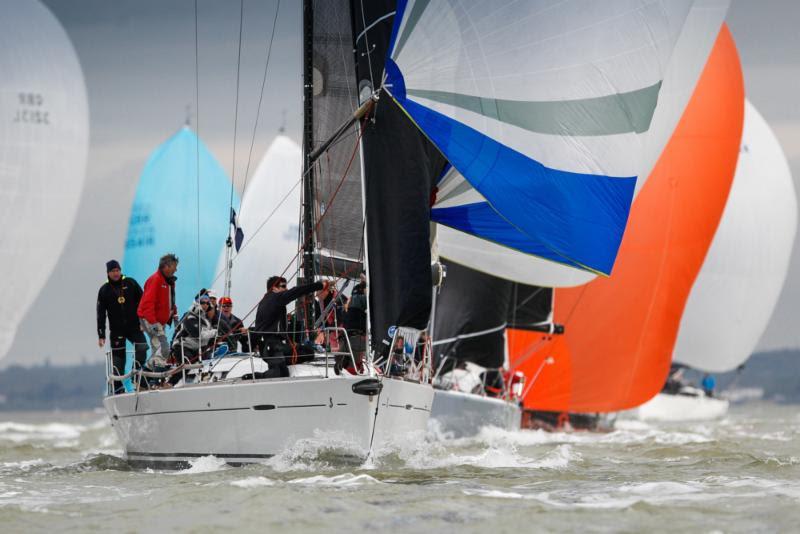 Olympia’s Tigress’ direct competition will be former RORC Admiral Andrew McIrvine’s La Réponse. McIrvine agrees that the Performance 40 class has helped transform his racing: “By taking the top end of Class 2 and the bottom of Class 1, Dave Swete has cleverly created a new competitive class. Racing is always better between boats of similar performance and the existing class splits are often too wide to achieve that. The first Performance 40 season was pronounced a success and with the support of RORC and other Solent clubs will continue and expand this year starting with the Easter Challenge. Our team on La Réponse are very much looking forward to it.”

While the RORC Easter Challenge caters for all skill levels and boats of all sizes, the competitive boats are not just limited to the 40s. We can expect to see top performances from the likes of David Frank’s new J/112E Leon, to Sam Laidlaw’s Quarter Tonner, the relentless champion Aguila to immaculately sailed classics such as Giovanni Belgrano’s 1939 Laurent Giles-designed Whooper and Harry Heijst’s 1972 S&S 41 Winsome.

For further information, please contact the RORC Race Team on: racing@rorc.org or visit: