An interview with Tom Bowler about the 2019 Wirth M. Munroe Miami to Palm Beach Yacht Race

Once the weather turns cold and the skies brood pregnant with the threat of snowfall, smart sailors start dreaming of warm-water racecourses. While the spring Caribbean circuit is a usual suspect, of course, sailors seeking an early-December fix are wise to look to the Sunshine State, which will host the Wirth M. Munroe Miami to Palm Beach Yacht Race (WMR) on Friday, December 6.

This regatta, which is organized by The Sailfish Club of Florida and the Storm Trysail Club, gives racers two starting-line options, as well as the challenge of sailing offshore and possibly into the Gulf Stream, en route to a great post-racing party, the latter of which is being organized The Sailfish Club.

Better still, the event organizers have timed the two starts so that all raceboats should (hopefully) be tucked safely into the barn by 1800 hours, giving participants plenty of opportunity to socialize and celebrate the fact that they just reeled off a great distance race on a day when their unlucky friends back home could be stuck shoveling driveways or negotiating icy commutes.

I checked in with Tom Bowler, event chairman of the 2019 WMR, via email, to learn more about this exciting early-winter race.

Can you give us the backstory on the race’s culture and the kinds of boats that usually race?

As we’re now approaching the 63rd anniversary [of the WMR], we’ve certainly accumulated a lot of history, long-standing friendly competitions, races within races and a healthy share of cool boats. Broadly, it seems the WMR has three cohorts: Big, blue-water racer/cruisers; smaller coastal cruisers; and, over time, the emergence of grand prix entrants.

A quick historical perspective: three or four venerable yachts including Dick Richardson’s 64-foot yawl Good Hope; Hugh Schaddelee’s 55-foot yawl Hilaria; and Peter Grimm’s 72-foot yawl Escapade all hailing from the Lauderdale Yacht Club, dominated the first decade of WMR racing. The next fifty years have seen considerably more varied outcomes as the fleet has grown both in variety and geography while the core of the racing community has broadened considerably.

What was the impetus for offering skippers their choice of starting cities? Also, which start is proving more popular with racers?

For the 60th anniversary in 2016, the WMR start was returned to its Miami roots, after a twenty year absence. While this has been well-received, we also recognized the distinct advantages of a shorter course, and, in 2018, decided to offer two courses: The “classic” from Miami and the “sprint” from Ft. Lauderdale.

This seemed to play well as evidenced by a healthy “sprint” fleet last year and an already larger number of entrants for that course this year. It feels like we’ve got the right balance and really like being able to offer something for everyone.

Will the two courses start racing at the same time, or will they use staggered/pursuit-style starts so that all boats finish around the same time?

The first signal is scheduled for 0900 for both courses. This is a change from last year when 0800 was used for the “classic” and 1000 for the “sprint”. The time limit for both courses remains 1800 and the starting times are being adjusted with this in mind.

From a tactical perspective, are there certain advantages to one starting city than the other? Also, will the two courses be scored separately or together using some sort of handicap system?

Having said that, we want to ensure boats can predictably finish by 1800 and move on to the Sailfish Club festivities. We think offering the “sprint” keeps the door open for broad participation and [we] like that a lot.

The two races are scored separately. The “Classic” when raced with a valid ORCi or ORC Club Certificate will be scored as part of the SORC “Islands in the Stream Series” which includes the Miami-Nassau Race, the Lauderdale-Key West Race, and the Miami to Eleuthera Race.

Speaking of ratings and classes, we’d have to mention the dramatic uptick in ORC participation the past few years and it’s continuing to grow. It’s also been great to see boats entering attracted to our offering the East Coast Racer Association (ECRCA) class.

Logistically, does it complicate things to have two starting cities that are situated dozens off miles apart? Also, does this put extra pressure on the event to deliver a great post-racing party in Palm Beach?

Yes, for sure, however this is where our collaborative approach and partnerships shine. We’ve got our long-time friends and history with Biscayne Bay Yacht Club hosting the skipper’s meeting, the Storm Trysail Club and SORC managing the two starting lines, and the wonderful dedicated team at the Sailfish Club of Florida managing the finish line, scoring, and of course, the legendary reception, buffet dinner, and awards event.

We’ll be live streaming the skipper’s meeting again this year as one way to manage a unique set of logistical hurdles and deliver a cool experience to a wide spectrum of boats. Feedback last year was very positive on this initiative so its back this year. 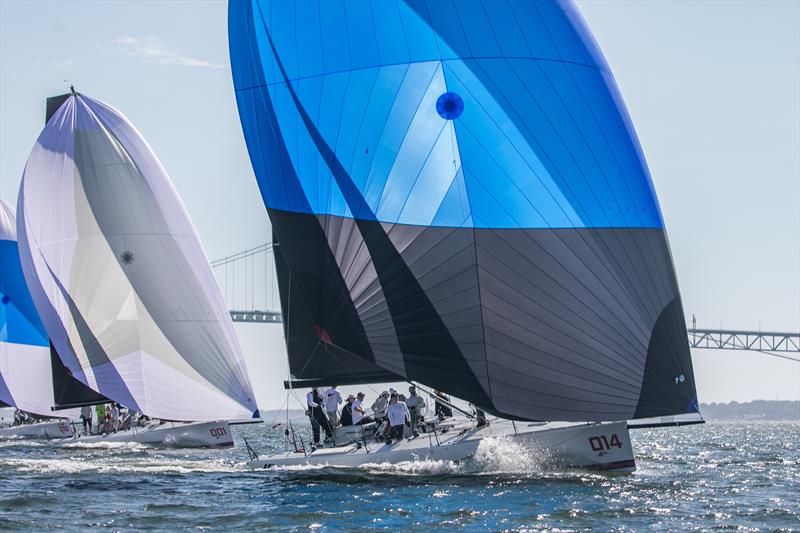 Are you anticipating any different kinds of boats this year? Also, how are overall entry numbers looking compared to previous years?

We haven’t seen this level of early entries in many years and I’m optimistic the fleet will continue to grow. I’m particularly excited to welcome the new [Melges] IC 37 class to the race with four current entries and possibly another on the way.

At this point we’ve got twenty-two entries representing eight states plus the Bahamas.

Looking at the entry list, do you have any favorites for line honors? What about for the overall winner?

But who knows, it’s early and anything can happen. Stay tuned.

Can you tell us about any recent steps that you and the other event organizers have done to lower the regatta’s environmental impact?

This is the third year the WMR has participated in Sailors For the Sea’s sustainability/green initiative. Our Sustainability Committee has worked hard to achieve our current Silver level of certification. We are now aiming for a Gold Certification for the 2019 WMR. We strongly recommend that our fellow club’s and regattas begin their own journey to Gold just as we did in 2017.

The “Sailors” 25 Best Practices are clearly articulated on the Sailors For The Sea website. WMR is closing in on 19 of the 25 Practices and by doing so would get to Gold.