The event’s final day was sailed in Newport’s perfect summer conditions: sunshine and sea breeze. Rougarou37, helmed by Andy Lovell, ultimately won the regatta with Qubit two points behind in second place. Melges IC37 teams Rush, Foreign Affair, and Double Jointed rounded out the top five overall. The milestone week concluded as glamorous as it began with an evening at the New York Yacht Club full of celebration and camaraderie.

True to its reputation as the most level playing field available, the fleet of IC37’s by Melges targeted the sailors’ combined skill, preparation and teamwork this week as the formula for success. Each day, the scoreboard was riddled with ties and teams struggled with consistency.

But today, Melges IC37 sailors experienced some of the closest racing the fleet has ever seen, providing an electrifying close to the week. Three races were sailed in a puffy sea breeze and small swell — an ideal combination. All 21 Melges IC37 teams were switched on and changing gears smoothly to keep up with the dynamic conditions.

The duel for the podium lasted through to the end of the final race of the regatta. Andy Lovell and the Rougarou37 crew, through determination and teamwork, won the day and the regatta.

“It was a great win,” said Andy Lovell. “The number one thing we learned [was] how to work together as a team and what everybody’s strengths and weaknesses are. We’ve sailed 15 days in the boat, and it’s really helped establish that.”

Trimmer Andrew Eagan shared “it was a long week and we had a lot of ups and downs. But we put it together near the end of the regatta.” Eagan is a returning member of the 2017 Rolex New York Yacht Club Invitational Cup Champion team from Southern Yacht Club and looks forward to defending their title in September. “It was a good week for the team, and I think everybody is excited. It was a good kick-off for the yacht club for the invitational cup.

After six days together, Melges IC37 sailors spent the evening on the lawn at the New York Yacht Club one last time for the award ceremony and celebrations.

Melges IC37 members will come together again in September for the inaugural Melges IC37 Class U.S. National Championship before heading south for the winter series in Ft. Lauderdale this November. 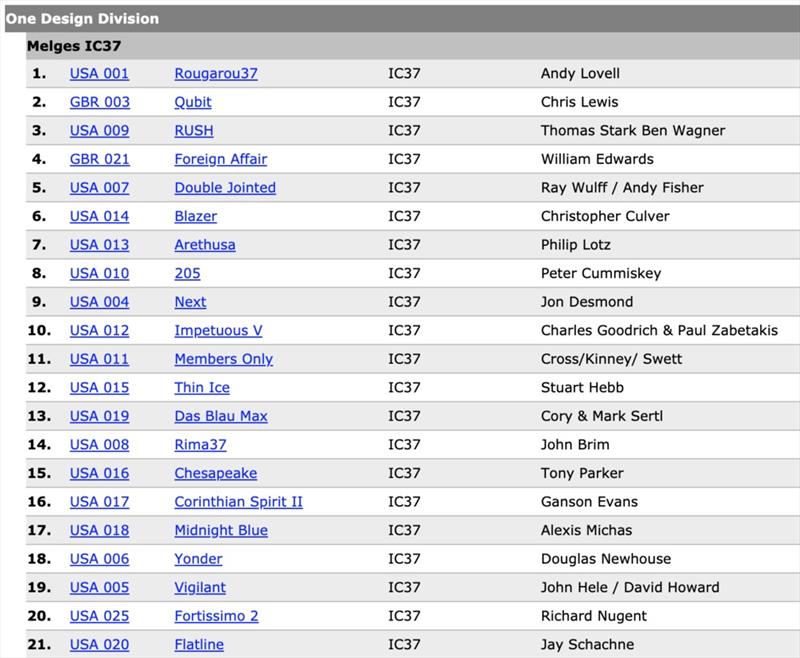