On a picture-perfect day for yacht racing, with bright sunshine and 14- to- 20-knot easterly trade-winds coursing over the turquoise waters of the Caribbean, the 40th Anniversary Edition of the St. Maarten Heineken Regatta commenced today with a pair of races for all competitors in the racing, bareboat and multihull classes.

The laid-back Island Time division for cruisers completed a single contest. Everyone agreed that the sailing was simply spectacular.

Race Director Marc van Dongen oversaw a pair of racing circles off the island’s southern coastline, with Committee Boat A in Simpson Bay handling the two CSA Ocean Racing Classes and the Multihull 1 division, which sailed two 20.7 nautical-mile races; and the CSA 1, 2, 3 and 4 divisions and the two CSA Sportboat classes, which negotiated two 17.1 nautical-mile races.

Committee Boat B was stationed off Cole Bay and in charge of competition for the Multihull 2 class, the CSA 5 division and the four Bareboat classes, all of which completed a set of 10.4 nautical-mile races. There was also a third, separate starting area for the three one-design 12-Meters, which also registered a couple of races.

Fittingly, this landmark edition of “the Heineken” kicked off with the highly anticipated Ocean Racing 1 class, comprised of seven purpose-built Volvo 60, 65 and 70 round-the-world rocket ships, as well as an extremely well-sailed Cookson 50, Grace O’Malley, with a homeport of New South Wales, Australia. In fact, starting from the pin end of the line, Grace O’Malley absolutely nailed the start and crossed nearly the entire fleet on port tack, putting the larger Volvo boats on notice that she would be a force to contend with on corrected time. By the time the pack had reached the first weather mark, however, order was restored to the class universe as the big red Volvo 70, I Love Poland, overtook the pack and was first to hoist a spinnaker, scorching down the coast toward a turning mark off Marigot making double-digit boat speeds.

Next up were the big trimarans and catamarans in the 7-boat Multihull 1 class, who quickly proved they were in no collective mood to take the backseat to the powerful Volvo monohulls. The two flashiest entrants were a pair of impressive three-hulled beauties: the 81-foot French tri UltiEmotion 2 and the pretty Rapido 60 trimaran, Ineffable. Both boats rounded the windward mark almost in tandem, then roared downwind, their outer hulls spread wide like the wings of a graceful bird in flight.

With the big boats underway, the subsequent classes followed suit in steady, 5-minute intervals. There was one stirring image after another. The Swan 80, Umiko, racing in CSA 1, was a blurry vision in black, followed closely by the Italian 60-footer Fra Diavlo. Nipping at their heels was Anna, a light-blue stunner all the way from St. Petersburg, Russia. Then came the famous, groundbreaking 58-footer Maiden, which made history in the old Whitbread round-the-world race with her tenacious all-women crew. And she still looks great. 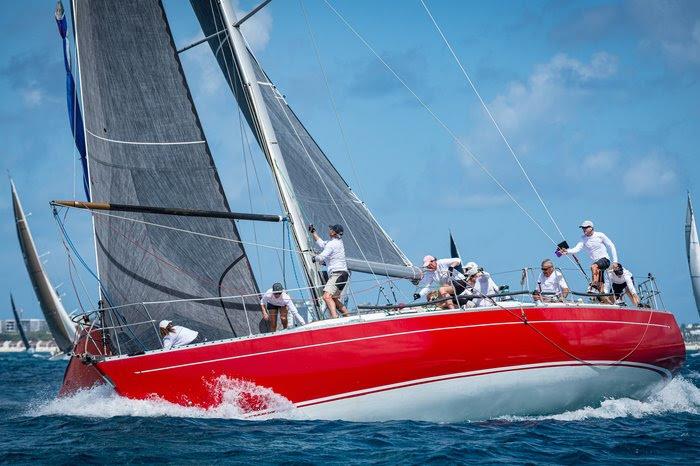 On they came: Grand Prix racers, the tiny but resolute Sport Boats, the dual-purpose racer/cruisers. It was like a history of yacht racing and design come to life. After rounding the island’s southwest corner and spinning around a mark off Marigot, the fleet came roaring down the Anguilla Channel, which was flecked in whitecaps. If you love sailing, there was no better place to be.

As the yachts approached the finish line in Simpson Bay, after skipping past a final mark set right off the distinctive three-master, Maltese Falcon, the breeze kicked into the low 20s, the windiest stretch of the race, and more than a few yachts had some issues dousing their kites before finishing. What a day to be a sailor.

Meanwhile, as the Simpson Bay classes were gathering for their second race of the day, the same rituals were underway on the Cole Bay circle. While the former classes headed west, the latter divisions pointed their bows east. First off the starting line was the Multihull 2 class, with the Leopard 50, La Novia—which cleaned up in the recently concluded Caribbean Multihull Challenge St. Maarten—once again taking an early lead. Then came the CSA 5 class, with the lightning quick X-402 MYXY; the Hanse 43, Avanti; and the Jeanneau Sun Odyssey 44, Vollectus, all battling hard in the early going.

By late afternoon, the last of the bareboats, sailing wing-and-wing down the coast, were wrapping up the first day of action. When the smoke had cleared, there was a long roster of top performers throughout the fleet. Among them was the aforementioned Grace O’Malley, sitting atop the Ocean Racing 1 division; the Melges 32, Kick ‘em Jenny 2, residing at the front of the CSA Sportboat 1 class; and the Oyster 48, Scarlet Oyster, leading CSA 2 after a pair of victories. For complete results for all 17 classes, visit www.yachtscoring.com.

Day 1 of the 40th Anniversary Edition of the St. Maarten Heineken Regatta is thus officially on the books. But tune in tomorrow. The fun and competition, well, that’s just begun.