No team was hotter at the end of the 2019 World Championship than Diego Botin and Iago Marra (ESP).

The Spanish sensations were up against the ropes, almost missing gold fleet, which would have cost them an Olympic berth. With the pressure on them at maximum they tore up the final four days of the World Championship to move from 30th up to fourth overall.

Three days into the 2020 Oceanias, the warm up regatta to the Worlds next week, the Spaniards have continued that momentum to sit atop the leaderboard. They scored a 4, 5, 1 on the day to stay in first overall.

The team everyone is looking to beat, Peter Burling and Blair Tuke (NZL), won the first two races of the day before the Spanish won the final race to get back on top of the leaderboard. Both teams have sailed to only top 10 finishes all regatta long, and are far enough ahead of the pack they can focus in each other to try winning the regatta tomorrow.

From 2013-2016 nobody could ever beat Burling and Tuke. Germans Heil and Ploessel came ever so close at the 2019 Worlds, and now the Spaniards are taking a turn to pull the champs back down to mortal status.

The day in Geelong was a wild one, with top end winds from morning to night. The challenging conditions limited 49er Bronze fleet to just a single race, but also was a struggle at time for the race officials. In the 49er Blue fleet course the pin boat got tangled up and held stern to wind for long enough to fill up and capsize. All of the volunteers were plucked from the water safely, but the incident was a reminder of the power of the sea.

Nacra 17 Gold and 49erFX Gold headed out in the afternoon in somewhat moderating breeze. 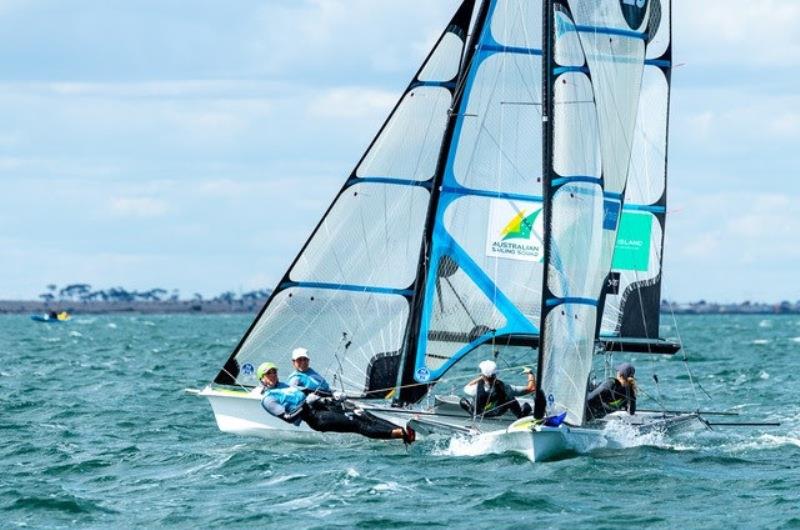 The 49erFX fleet also saw Spaniard dominate the day and narrowly lead a Kiwi team overall. Tamara Echegoyen and Paula Barcelo (ESP) scored a 1, 2, 1 on the day to move a point ahead of Alex Maloney and Molly Meech. The Spanish used their superior speed and an approach that saw them favor the shifts over a side.

Said Barcelo, “We had very good speed today, and we also caught a lot of good shifts by sticking closer to the middle than counting on a side… but for sure the speed was the number 1 thing!” They also pounced on a capsize by Roble/Shae (USA) just before the finish line to grab one extra win.

Echegoyen is a 2012 Gold medalist in match racing and the 2016 World Champion in 49erFX, but had a nightmare of a regatta in Auckland landing in Silver fleet. The duo are behind their Spanish team mates in the selection for Tokyo but are capable of elite regatta performances.

The Nacra 17 fleet was relishing the big fleet, high quality standard of racing. With many of the chasing teams out of the hunt for Tokyo the fleet is down to 35 boats so we’re able to run them as a single fleet meaning that all the top teams are fighting it out in each race from the regattas start. 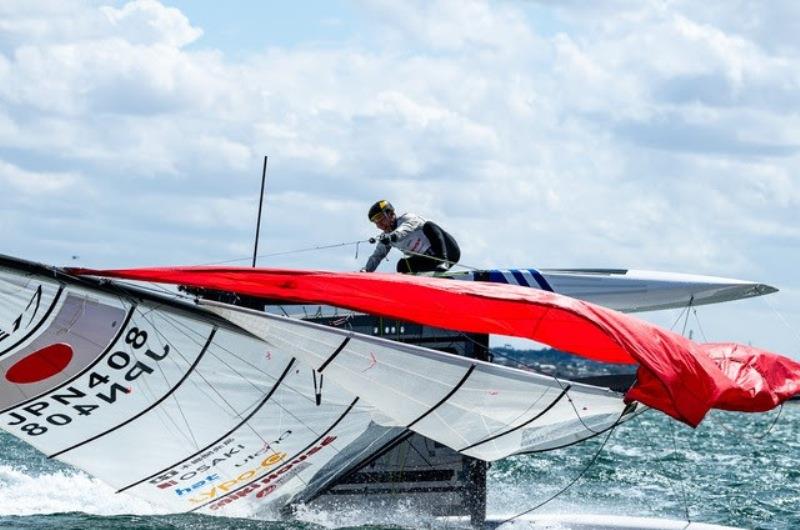 Gimson and Burnett (GBR) continued their strong form and Zajac / Matz (AUT) had a 1, 2 to finish strong on the day. Said Zajac, “There were shifts, but it wasn’t so bad. We picked our sides but also could cross through the middle if necessary. The weeds from yesterday were blown out to sea, so that wasn’t a problem today and we got to enjoy great racing.”

There is one day left in the championship and all three fleets may see the wins decided. The forecast, however is for even more wind than today so there may also be some waiting around.