Former German 49erFX teammates combine beautifully to lead on the first day of racing – much to their surprise.

Tina Lutz’s regular crew Susann Beucke injured herself soon after the 2019 World Championship in Auckland and Lotta Wiemers agreed to step back into the boat to crew for the second half of the Down Under series of back-to-back world championships.

The decision to bring the pair together delivered the German sailing team early fortunes in the six days series hosted by Royal Geelong Yacht Club. “I don’t know what happened today, we somehow went always in the right direction,” said a genuinely surprised and delighted Lutz.

“It felt always very good out there. Today was just crazy….we are super happy with our first day of racing,” Wiemers added. “I haven’t sailed for two-and-a-half years but I think we are doing a good job of finding the middle of pushing it, but [being relaxed too].”

A condensed qualification round got under way at the 2020 49er, 49erFX and Nacra 17 World Championship at Geelong. There will be at least one more day of qualification before the two skiff fleets are divided into Gold Fleets for the final three days. All racing finishes on Saturday February 15.

It’s been a frustrating start to the world title for sailors and administrators with day one blown-out and day two race one in 8-12 kts of westerly before the breeze transitioned to the SSE, but not before collapsing to the point it was un-sailable for hours. 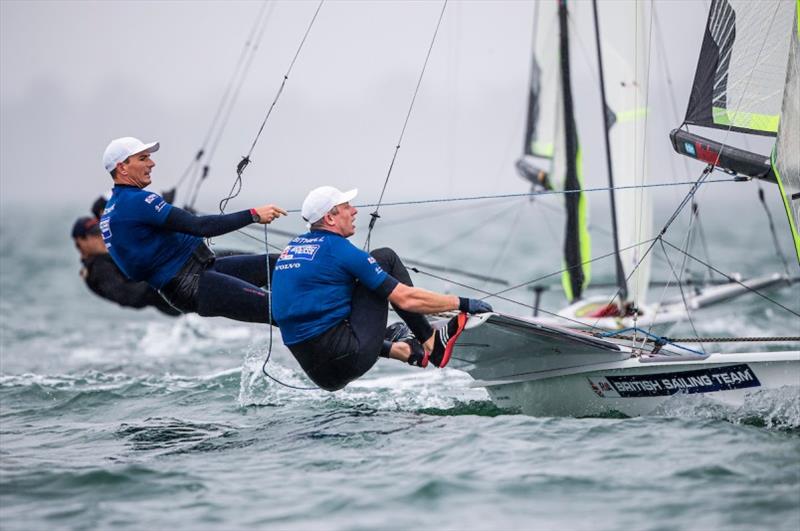 Charlotte Dobson and Saskia Tidey (GBR) won races one and two in the FXs then just bailed out of the top 10 to finish fifth overall. “We’ve had a pretty long day on the water today. We spend all year trying to maximise time in all different types of conditions and this venue is throwing us all sides of the dice. We’ve had a challenging day, everyone has, but I think we have come out of it pretty well,” Tidey said.

Second to the Germans was the Australian team of Tess Lloyd and Jaime Ryan and third the Spanish, Tamara Echegoyen and Paula Barcelo. “Over the last month we have been doing a lot of starting practice with many of the international crews who are here, and it is definitely paying off,” Lloyd said.

The 49ers made up the afternoon/evening session, the final race finishing close to 7pm due to the fleet being held ashore during the transition in the middle of the day.

First bite in the 49er class went to Dylan Fletcher-Scott and Stuart Bithell (GBR) and they followed up with a second win and a second to lead the Austrians, Ben Bildstein, and David Hussl who appeared on today’s Daily Show and spoke about setting up a 49er like a pro. 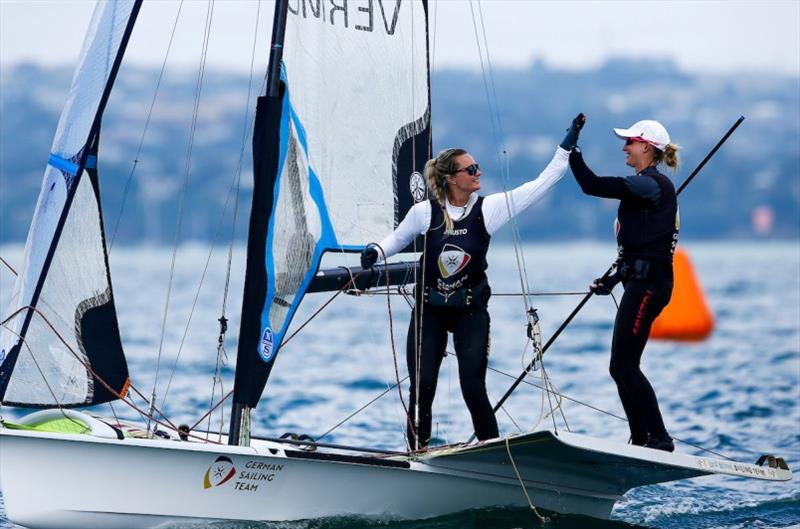 “We only just managed to get to the racecourse in time today as we had to make some changes to the mast,” Fletcher-Scott said. “We snapped our top section a couple of days ago; put a new one on and rigged up today and had a little issue. In the end you can’t really start a worlds any better than we did. Stu made the boat go fast and I picked a couple of shifts, together this was the winning combo.”

The racing started off in dramatic fashion for German vice World Champions from 2019, Erik Heil and Thomas Ploessel. Immediately following the first start a port tack boat crashed into them causing them to capsize, and Ploessel picked up a minor injury. They righted themselves to continue racing, rounding the windward mark in 25, but managed to work all the way up to 8th, salvaging the race. 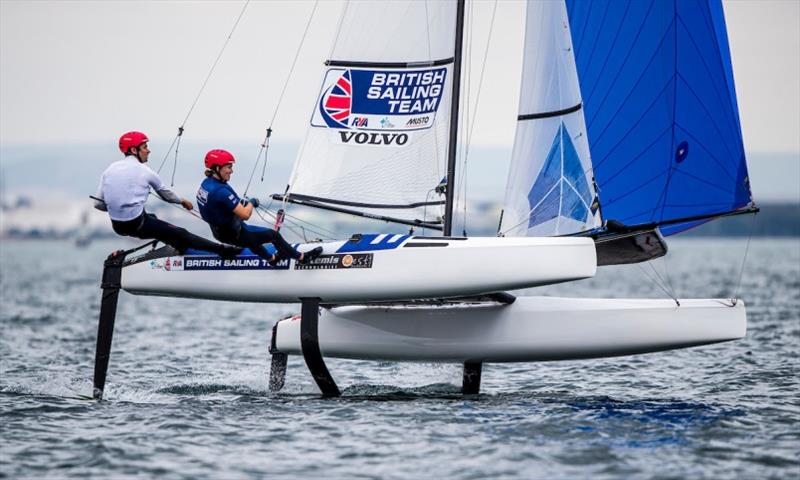 First Nacra 17 points went to Aussie siblings Nathan and Haylee Outteridge, scoring a win then a second and a 10th to finish second overall. Enviable opening scores but the GBR team of John Gimson and Anna Burnet went one better, a 10th then two wins to be the lead multihull.

“It was a day that was dictated mainly by the seaweed in the water, a bit like in the warm-up regatta a week or so ago so we kind of knew what to expect,” Burnet said. “It’s a good start. We have lots of races to go but if we can carry on that form, then we will be pretty happy. We have a couple of windy days coming up.”

A beaming Haylee Outteridge returned to Eastern Beach and commented, “It’s really good to have three keepers today because it means it is effectively like having them in Gold Fleet. Most of the people who have committed to keep going this late in the quadrennial are the ones pushing to go to the Olympics, so we are in good company.”

More breeze is forecast on the Corio Bay racetrack, located in the south-west corner of Port Phillip, Wednesday and Thursday, up to 25 knots on Thursday then moderating. Drizzle and showers are likely.

Royal Geelong Yacht Club is host of the 49er, 49erFX and Nacra 17 2020 World Championship along with six other major events that fall under the club’s ‘Summer of Sailing’ calendar rolling out between January and March.