After a very disappointing opening to the Odzala Discovery Camps 52 Super Series V&A Waterfront – Cape Town regatta, Harm Muller-Spreer’s world champions Platoon bounced back to record a second and first today as the top scoring boat in the fleet.

But, after six races have been sailed off Cape Town, it is still the 2019 overall title holders Azzurra who lead, today extending their cushion to ten points.

Azzurra’s consistency, posting a 3.5 point average for the day, is the result of patience, minimising risk and obviously good boat speed, while Platoon’s three-points aggregate for this third day of five planned racing days, moves them to within three points of second-placed Phoenix 11.

“We have been consistent and playing it safe where we can; most of this season that is the plan. The boat is going very fast, especially downwind, so we are happy and feel like we have taken a step on from last year. We think we are better in the flat water, like here, which was our achilles heel in the past. It is hard to make that assessment just now because all the boats are so even in this flat water.

We are not taking any risks. Even if the left is favoured we are not pushing, we are trying to keep safe, clean lanes and letting the race develop.”

But to date all of the races have been sailed in light to moderate breezes, often one-sided drag racing off the start line. All that is widely expected to change tomorrow, Thursday, as the brisk south-easterly ‘Cape Doctor’ is forecast to arrive, for one day only. This could prove a decisive day in terms of shaking up the leaderboard.

Doug DeVos’s Quantum Racing triumphed in the first race of the day extending away from second-placed Platoon in a modest, oscillating 10 knot north-westerly that died on the second round. But the four-time 52 Super Series champions matched their win with a sixth from the nine starters. 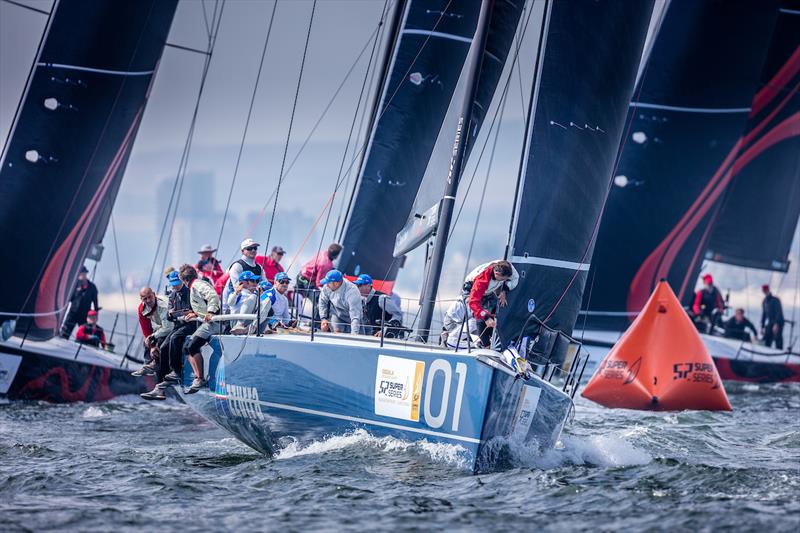 After an OCS in the first race of the regatta, then penalties yesterday, Platoon’s trimmer Ross Halcrow was upbeat: 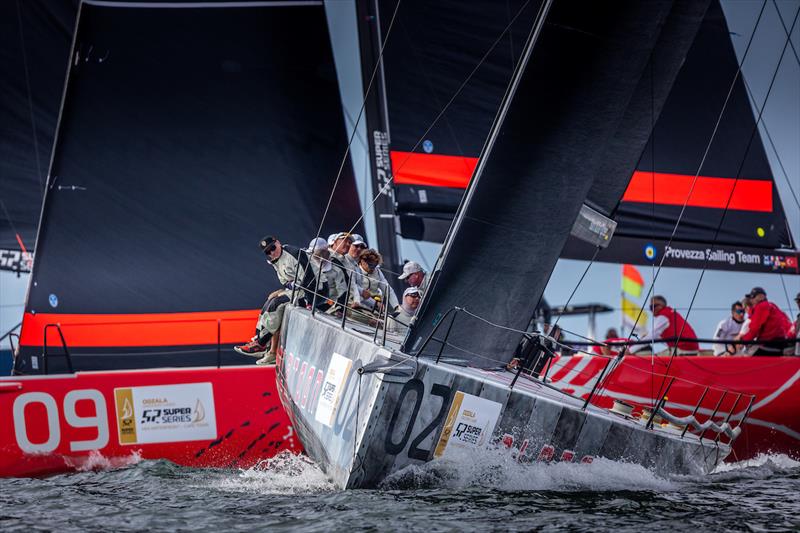 “It felt pretty good out there today. In fact we have felt good all week so far but we have just had these unfortunate incidents out there on the water, so it is good to get back to it today. We had a couple of good starts and then that makes life a lot easier. The first race had options but the second course is very left favoured, but the weed comes into play. If you go too far you get hooked up with weed. We stayed a little bit out. We saw Bronenosec unfortunately get the weed. When you are behind then you have to push it and they did and had some losses.”

A collision with Alegre during the first race on Tuesday means Sled are unable to continue racing due to damage to their standing rigging. Their score is redressed to average points per race sailed after Race 3, but tactician Adam Beashel points out:

“It is disappointing to miss out but the other side of it is we miss all the racing time on the water that all these guys will be getting before the worlds.” 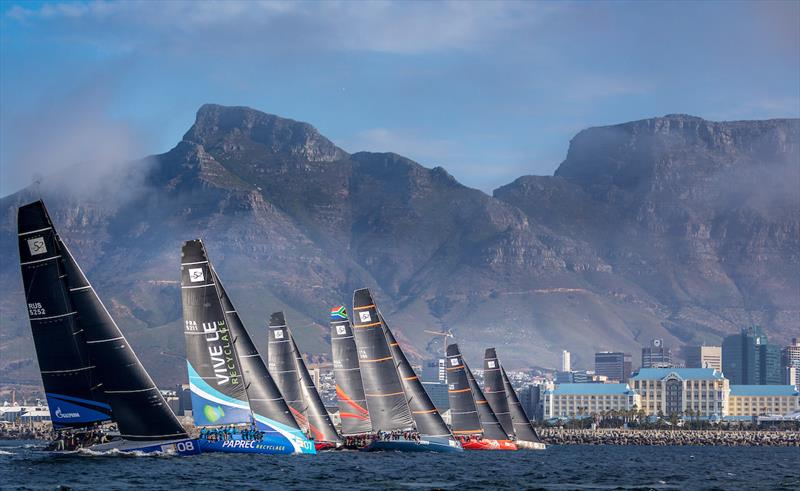 The boat flying the Yacht Club Costa Smeralda’s burgee now has a 10 point margin over the second placed team, Phoenix 11. Quantum is in third place and tomorrow’s forecast calls for the famous local Cape Doctor winds from the south/southwest.

The wind was very unstable in Table Bay for the third day of racing at the 52 Super Series. Cape Town woke up wrapped in fog and the Race Committee had to hoist the AP and postpone the beginning of the day’s races while they waited for the forecast winds from the northwest to fill in and blow off the cover. When the wind arrived it was at almost 20 knots but quickly died down and rotated north. Finally at 2:40 PM local time the fleet could get the fifth race at this event under way in wind at about 14 knots but very shifty and unstable because of two contrasting wind flows. 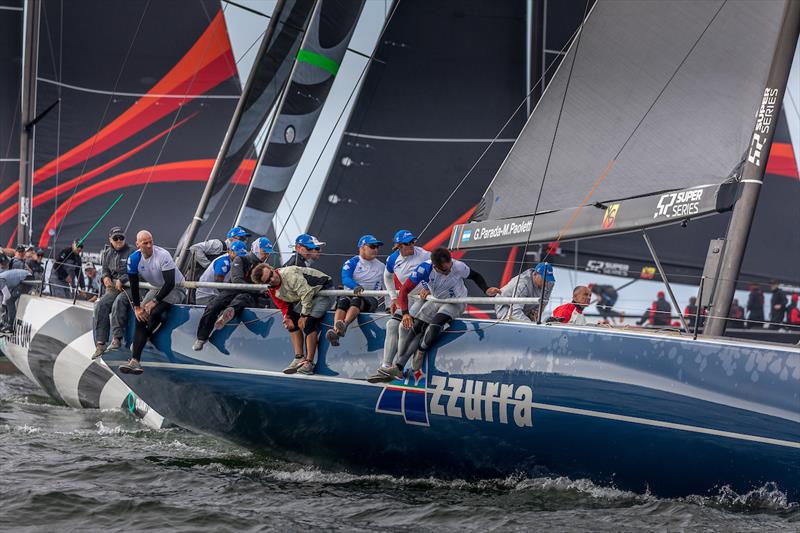 The entire fleet was going for a start on the Committee Boat because the right side looked best considering the wind’s rotation. Azzurra looked to be in a good spot but Provezza slipped in and slammed the door, slowing the YCCS boat down. Azzurra’s team stayed positive and began to recover positions windward to the fleet in clean air, sailing on starboard to the left side of the course. Which luckily turned out to be the better side after all. Azzurra rounded the mark sixth behind a group headed by Quantum, Platoon and Alegre that had started at the pin. For the rest of the race Azzurra was battling with Bronenosec and she won, finishing fifth. Surprisingly enough, Paprec finished fourth.

The second race only got under way at 17:10 local time because the breeze died down and became shifty. The Race Committee positioned the course on the same route they chose on the first day of this event, along the coast, because that was the only spot with decent sailing conditions. The left side was clearly the best, but the starting line was set up so that the pin wasn’t the only tactical option.

Azzurra stayed conservative and chose to start on the Committee Boat in the hopes of crossing in front Alegre and Platoon, who had started on the pin, on starboard tack. Even though the YCCS boat didn’t manage to execute this manoeuvre, she rounded the mark in fourth place right behind Provezza, who was third. Thanks to some very skilful manoeuvring, excellent boat speed and clever tactics, Azzurra managed both to fight off Quantum’s attacks and to roll Provezza. Third at the gate and at the next mark, after a thrilling tacking duel with Provezza, Azzurra sailed along the coastline along the final run and managed to tack in front of Alegre to finish second in a race that was an excellent show. Thanks to today’s scores Azzurra has consolidated her leadership in the 52 Super Series’ provisional results.

Guillermo Parada, skipper: “At the end it was a good day for us even though we didn’t get a good start in the first race and were slow and on the wrong side of the course. The starting line wasn’t positioned right and we were tricked: the best side would have been the left and that impacted our race. But it was good to see the team working through it calmly, taking advantage of the chances that worked in our favour. Fifth place isn’t the greatest, but it’s not the worst either and limits the damage. Before the second race we had to wait on the water for a long time before Maria (Torrijo, PRO) managed to reposition the course in zone A. There the lay line is towards the land and that really impacts the geometries. We stayed conservative and started on the right, rounding the mark fourth, then along the two runs we passed first Provezza then Alegre finishing second which is practically worth a first. Now we have to rest up and tune the boat carefully because tomorrow the Cape Doctor is coming to town.”

Michele Paoletti, tactician: “The conditions today were very unstable with two different wind flows that were pushing against one another. The first race was OK because we recovered well from a not so good start. This is a Class where every little bit counts, we were a little slow getting ready for the start and lo and behold at the crucial moment, stuck in the traffic, we didn’t manage to position ourselves the way we wanted. We wanted to start windward but the pin turned out to be better even though it was riskier. So our fifth place was just fine. The second race was a classic bounce along the coast: as far as the landmass goes, the left side was better, but on that side there’s only room for one winner. We took the conservative option of starting on the Committee Boat so that we could manage our crossings better seeing how the season is made up of 60 races with no discards. We set it up right and got what we wanted thanks to this incredible team and their perfect manoeuvres. That’s what made the real difference out there today and what is distinguishing us from the rest of the fleet so far.”

Tomorrow racing is scheduled to start at 11:30 SAST South African Standard Time (10:30 CET) with the forecast calling for winds from the south-southwest, Cape Town’s famous Cape Doctor winds. Racing can be followed on the tracker Virtual Eye, on the website azzurra.it, on the 52superseries app or the website 52superseries.com. Live updates from the race course will also be posted on Azzurra’s Facebook page. 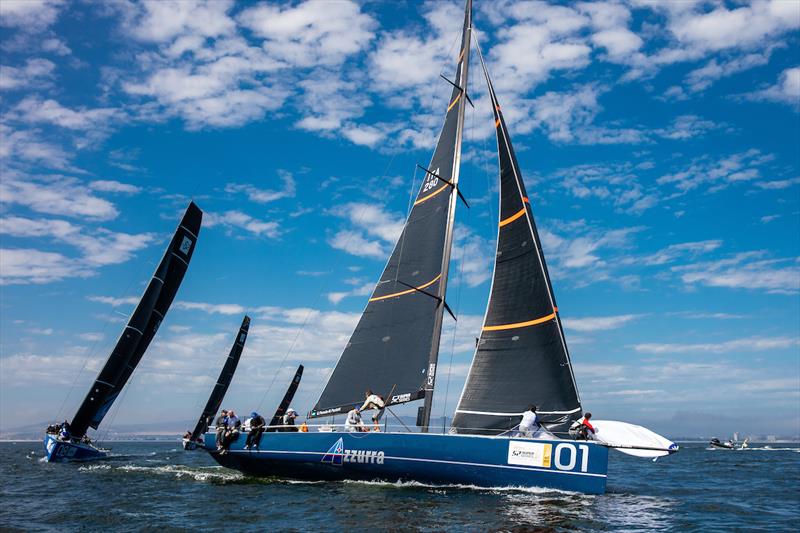