88th Round the Island Race

Michael Kitchen, actor, television producer and competitor fired the starting cannon from the Royal Yacht Squadron (RYS) at 0730 this morning to mark the start of the 88th Round the Island Race.

Kitchen, known particularly for his role as Detective Chief Superintendent Christopher Foyle in the ITV drama series Foyle’s War joined the race start team on the RYS starting platform before heading back to his yacht to prepare for his own start.

As he stepped aboard his Starlight 35 for his 0750 start, Kitchen said he was honoured to be the official race starter of Island Sailing Club’s iconic 60 nautical mile annual race around the Isle of Wight: “I couldn’t feel more honoured with the invitation of the official starter of this iconic race. It is a huge privilege. I have competed at the event many times and we always have a cracking time. It is a brilliant event.”

Commenting on his aim today, Kitchen said he and his four-strong crew hope to improve on the second place they achieved a few years ago. “Naturally we are hoping to do well. We are surprisingly competitive in its most attractive form. The idea is to beat our position from three years ago when we came second and won a bit of silverware. That would be fantastic but we are being realistic of course.” 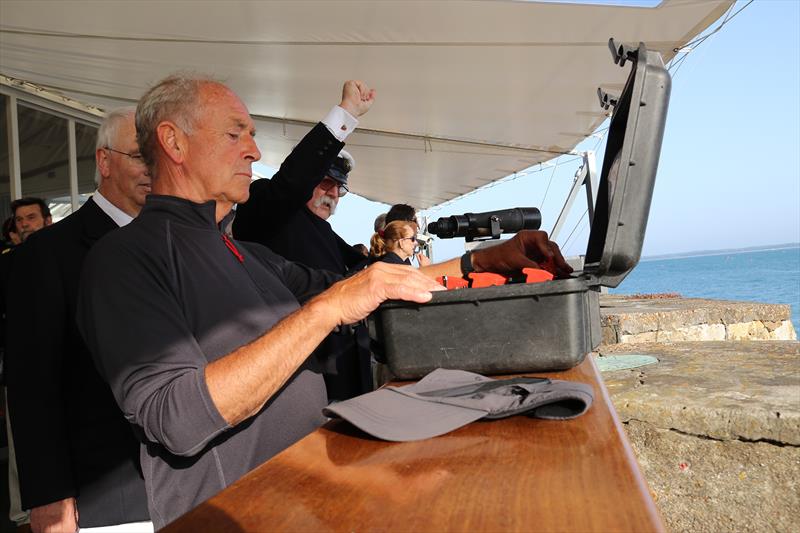 The forecast with scorching sun and no more than 15kts of wind is unlikely to create record breaking conditions for the 1,253 entries but with an ebbing tide and early morning east-south-easterly breeze, for a downwind spinnaker start, the first leg to the Needles should be fairly swift.

Giving an idea of what competitors are likely to expect as they head off round the island, Simon Rowell – British Sailing team and Round the Island Race meteorologist – said it is going to be fairly complex later this afternoon.

“It is going to be quite interesting with the wind coming from the east-south-east, not too light about 10-14kts, that will gradually ease through the day and sometime this afternoon, and this is where the uncertainty lies, it will start to go right. It is going to be quite a complicated weather change and not a steady move.

“The ones who do well are going to be the ones who work hard during that changeable period, when it changes from east to the west anytime from about 1500-1800. Those who work the hardest and really keep their heads out the boat are the ones who are going to make big gains. You will be able to see the race won or lost depending on what tactical decisions are made during the change.” 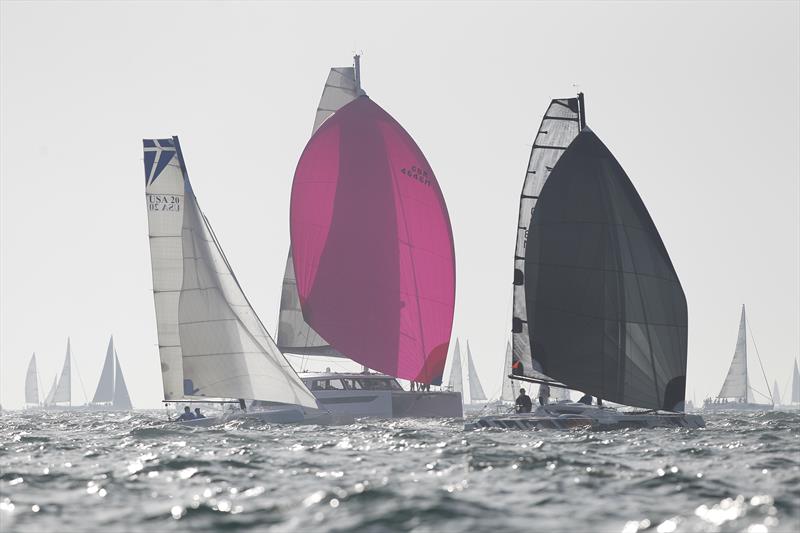 Thankfully a decent working breeze for the spinnaker start allowed all 11 Divisions to enjoy an exciting start and created a spectacular sight as they headed off the line west towards the Needles.

As always at this annual Race for All, the huge array of classes is what makes the race so interesting. Among some of the world’s fastest racing yachts and high profile sailors taking part this year and who are hoping to achieve top results are Pip Hare, leading ocean racing sailor on her Open 60 ‘Pip Hare Ocean Racing’, Yves Le Blevec’s Grand Prix racing multihull – ‘Actual Leader’, and Sir Peter Ogden’s Judel Vrolijk Mini Maxi ‘Jethou’.

As they headed across the line this morning these eye-catching machines provided a fantastic spectacle for the thousands of spectators out early watching the start. The bulk of the fleet made up of club and family sailors, and those racing for charities including The Ellen MacArthur Cancer Trust and the Organ Donation Awareness crew headed by Jacquie Dowding however, are what really make the event so special, with most keen to better their results from previous years.

Although it is relatively light and slow going all divisions have now started. Hopefully the majority of the fleet should be through the Needles before the tide turns at 1400ish.

To follow the race in detail, go to Race Coverage Live and the Race Tracker.

Overall nearly 200 prizes will be won at the event, which has a reputation for being a ‘race for all’ that includes boats of every shape and size.