The jury is still out in the Brits’ light airs performance. But if the breeze comes in for the Prada Cup, which gets underway in just over a week, it will definitely be a three way contest.

A lot of commentary weight has been put on stating the obvious from the America’s Cup World Series – the Brits propensity to break down at key moments, and their stickiness in the light.

Those who have had the privilege of seeing INEOS Team UK skipper Ben Ainslie perform in the white heat of an Olympic Regatta know that he is not a flashy sailor, but he is determined and relentless.

We have not really seen those qualities displayed in Auckland, so far in the build up to this unusual America’s Cup. 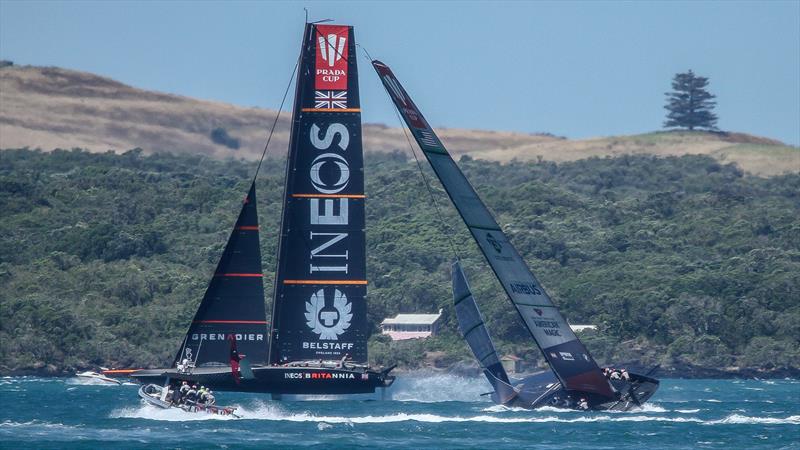 However today the Brits looked to have their act together, and you could sense Ainslie pushing Britannia, the AC75, in the same that he pushed Rita, his Finn singlehander to four Gold Medals in successive Olympics.

All four America’s Cup teams were on the water today, in conditions that were straight from Paradise. A fresh steady breeze from the SSW, that was summer-warmed despite its direction. Blue skies and bright sunshine completed the perfect picture.

INEOS Team UK laid a couple of marks for some windward leeward training on Course C – at the entrance to the Waitemata Harbour. As we have seen on a few occasions, unaccompanied training seems to attract gate-crashers – in this case it was American Magic joining the Brits’ party.

Our expectation was for the US entry which finished the America’s Cup World Series as the top Challenger, would show the Brits a clean pair of heels. However that was not the case, and INEOS seemed to have the measure of New York Yacht Club’s challenger.

Neither appeared to be sandbagging – and there would be no reason to do so, with the Challenger Series just nine days away – and with the configuration declaration to be made two days beforehand. This was really an opportunity for both teams to sort out sails – mainsails and jibs.

Both teams tried several jibs, with varying luff lengths. American Magic seemed to settle on a very short hoist jib that seems to be their stock choice for a fresher breeze. The Brits still used a J2, but more conventional in profile.

The “races” consisted of a couple of double windward leewards, with the teams skirting the rules prohibiting training in a coordinated manner, with the US boat following the Brits off the start line, and only one boat rounding the marks at the top and bottom of the course.

Even so there was plenty of cross tacking – and had American Magic any sort of speed or VMG (Velocity Made Good) advantage, then it would have showed.

Ainslie also looked to have good balance in the boat – enabling Britannia to be driven hard. There also looked to be a confidence in the crew, and we didn’t notice any handling errors during the couple of hours “racing”.

In fact it was American Magic who came close to a capsize when both teams were pushing hard to make the leeward mark, and both would have been sailing at 40kts plus in the conditions. Dean Barker realised just before a gybe that they were getting too close for comfort, and prudently pulled out causing Patriot to heel quite alarmingly to windward as Ainslie raced across their bows. This was the first time that we’ve seen one of the fabled 80kt closing speed intersections – with one team forced to bail out.

The US Challenger headed off down the Rangitoto Channel to train alone after the near-miss.

Once again the AC75 proved the soundness of its design, and while Patriot appeared to get its windward gunnel immersed, it seemed to self recover – and came upright, waiting for the crew to gather their wits. 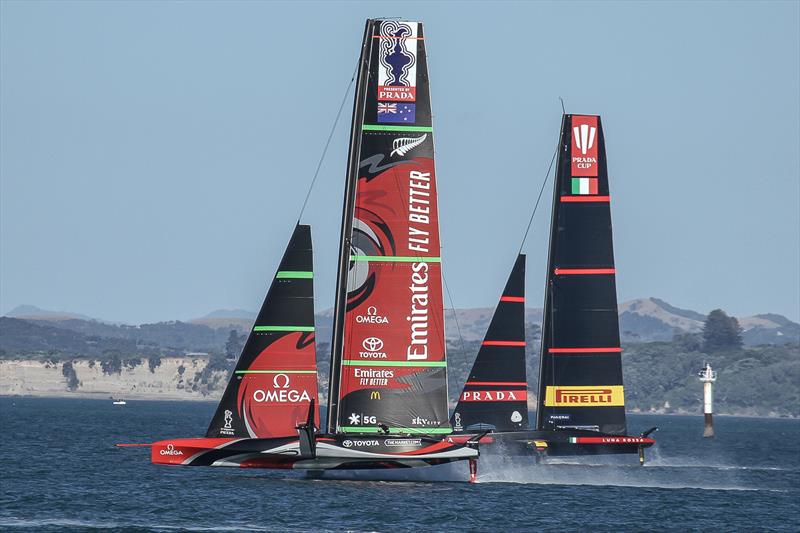 Over the contested session INEOS was impressive, and given a boat that is at least the equal of the other Challengers, Ainslie is more than capable driving hard, mixing it with the other two Challengers and coming out on top in these conditions.

There is no indication as to what INEOS has done regarding their light weather performance, however they seem to have settled on the unusual W-shaped wings – and were running with the same wing configuration on both foil arms.

Other points of interest today was a look at the skeg extension fitted to American Magic – it would seem to give a better end plate effect than previously. However the design shape of Patriot is very deceptive to appreciate – an illusion that seems to vary depending on the viewing angle. Coming to a conclusion is even more fraught given that the AC75 is normally sailed quite bow down when sailing close hauled, and is bow up, but heeled to windward when sailing downwind.

The other point of interest were the new crew cowls fitted to Luna Rossa. They certainly clean up the aerodynamics and will shield the crew and instruments from bow and foil spray. However it was surprising to see how deep the crew were standing in the pit area when they returned to base very late in the evening.

Whether INEOS has resolved her light wind issues will be known on Thursday (NZT) when the same conditions which were the Brit’s nemesis on the final day of the America’s Cup World Series and more apparent in the Xmas Cup, are forecast to return on Thursday. 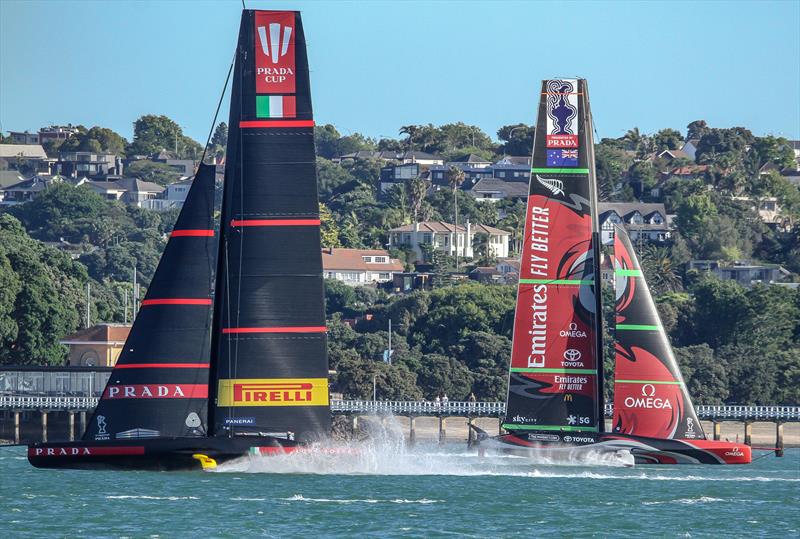 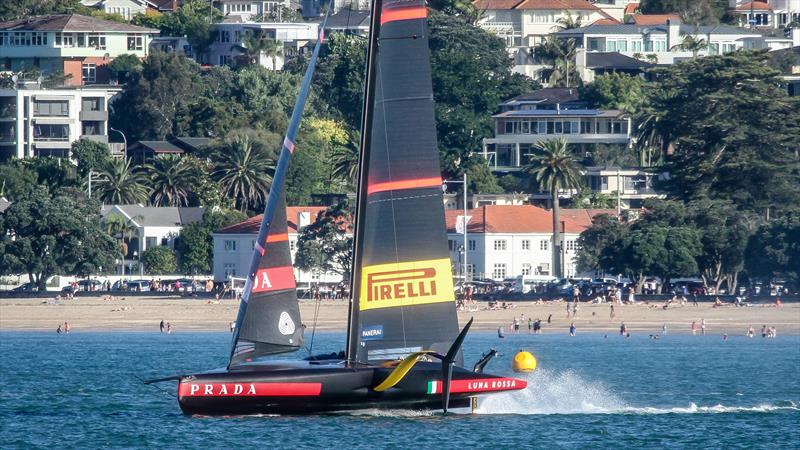 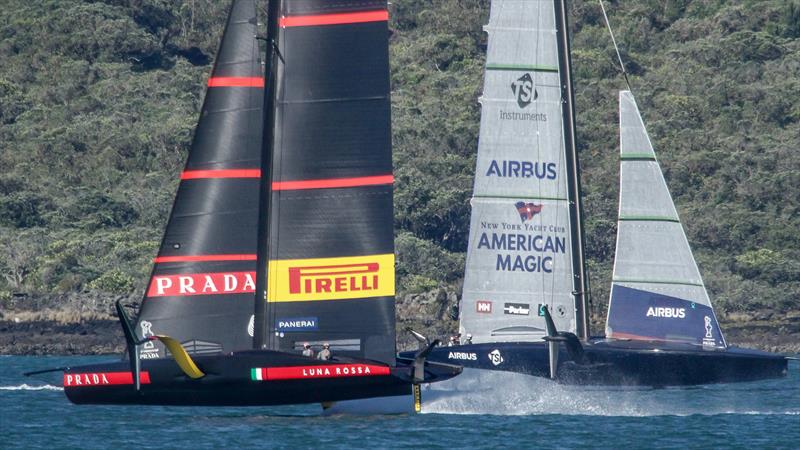 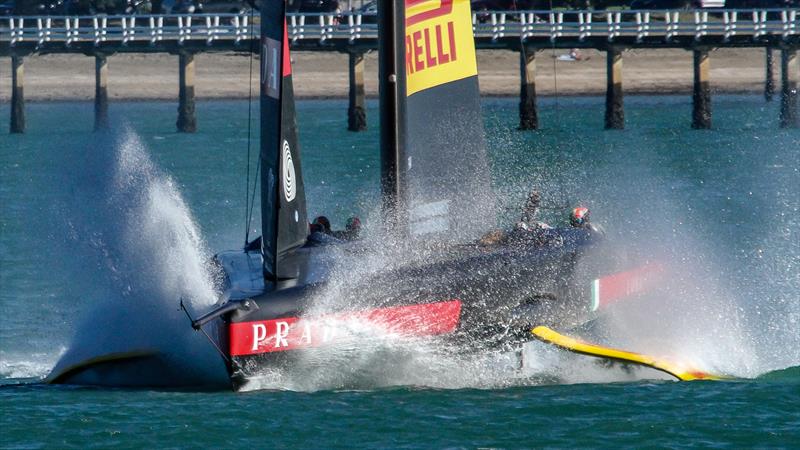 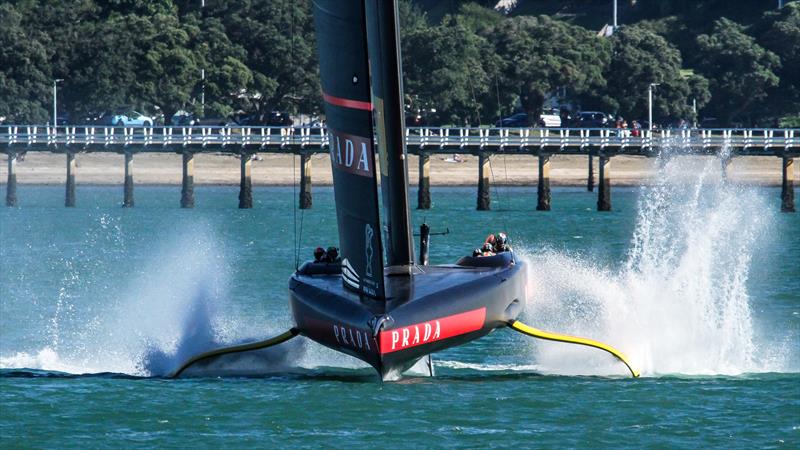 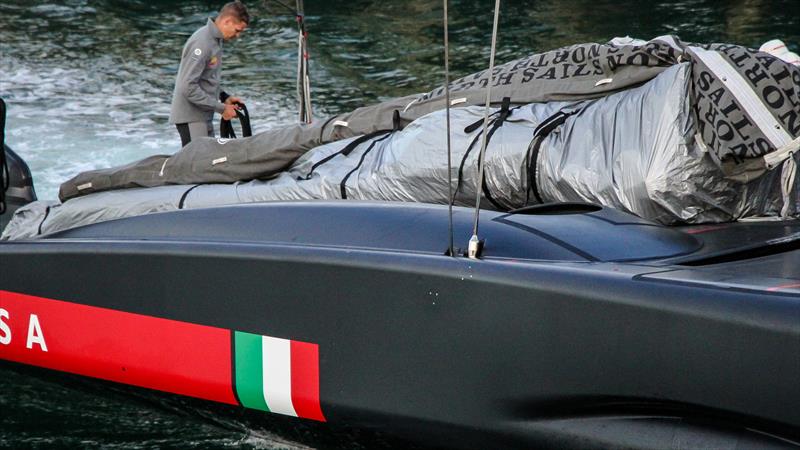 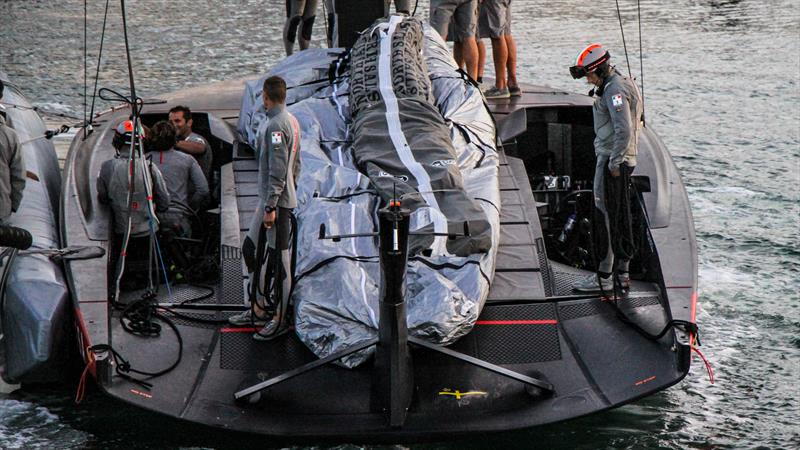