Launched in September 2018, the new 72-foot Maxi yacht Bella Mente looks to be on course for attaining successes not unlike those achieved by its three previous namesakes owned and skippered by businessman and champion sailor Hap Fauth (Minneapolis, Minn./Naples, Fla.).

Fauth and his all-star Bella Mente Racing Team are three-time Maxi 72 World champions shooting for a fourth world title while Fauth concurrently spearheads the New York Yacht Club’s American Magic challenge for the 2021 America’s Cup. And while juggling two of the world’s highest-profile sailing campaigns with running an industrial holding company the size of The Churchill Companies might be daunting to some, it only further energizes Fauth.

“If I were to wait two or three years, I might not have the same motivation to do this type of thing, so why not do it now?” said Fauth, age 73, after breaking the elapsed-time monohull record with the new Bella Mente in December’s 60-mile Wirth M. Munroe Regatta (Miami to Palm Beach). “And besides, two sailing programs are twice the fun.”

According to Fauth, the Wirth M. Munroe Regatta was about testing Bella Mente in the notoriously rugged Gulf Stream before its first major race of 2019: the Royal Ocean Racing Club’s (RORC) Caribbean 600 in February. “There was no breakage, no mysterious sounds. The boat feels great; it’s very well balanced and easy to put in a groove and keep it there.” 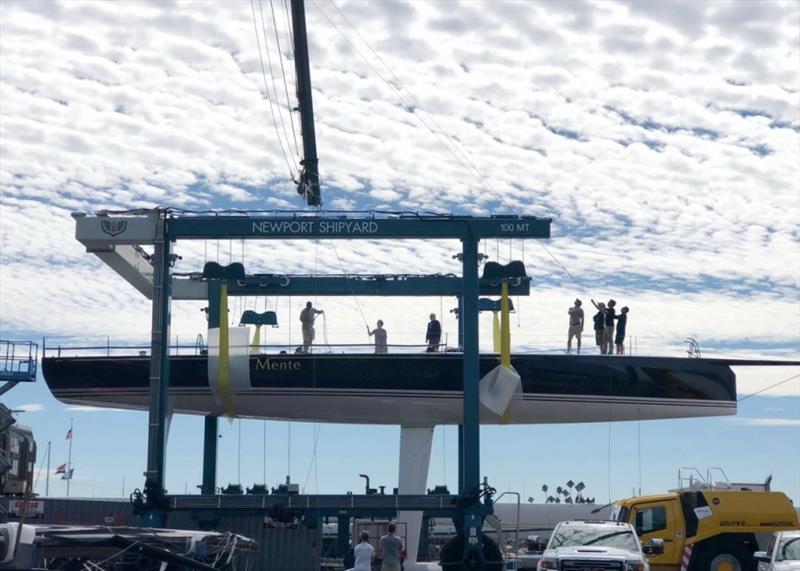 The new Bella Mente was designed by Botin Partners in Spain and built at New England Boatworks in Rhode Island, where the boat went through seven days of sea trials after its launch. Terry Hutchinson, Bella Mente’s longtime tactician, who also is working with Fauth on the American Magic project, said he could tell “straightaway” that the boat was a winner.

“We dropped off some pretty big waves in Narragansett Bay and didn’t have to go in for anything going wrong,” said Hutchinson, explaining that Bella Mente was then shipped to West Palm Beach for more sea trials. The team sailed in more big waves and “nasty short, sharp chop…max runner, max mainsheet load; everything was wound on.” Everything hung in there; there were no issues.

“These are intricate boats, and the reason that happened is because of all the people that paid incredible attention to detail,” said Hutchinson. “It starts with the Captain (Peter Henderson) and follows through to the shore team and the build team.”

Hutchinson said the original plan had been to launch the boat and go straight to the 2018 Worlds; however, in the end it was determined that the schedule was too tight. “Had we done that, however, I think that the shore team and sailing crew would have done an unbelievable job of executing, and the boat would have performed just fine.”

Though it’s a new boat, the sailing team (including offshore helmsman and crew boss Mike Sanderson, navigator Ian Moore and strategist Adrian Stead) is much the same as it has been for five years.

“We have guys that own their areas of expertise, and they’ve done laps around the world,” said Hutchinson. “We have good balance across the wide spectrum of racing that we do, and for the better part of three years the Bella Mente Racing Team has had a 75% winning percentage of regattas entered. It’s hard to complain about that.”

As for how he and Fauth will balance the two sailing campaigns, Hutchinson is direct with his answer: “Proper planning, clear objectives.” 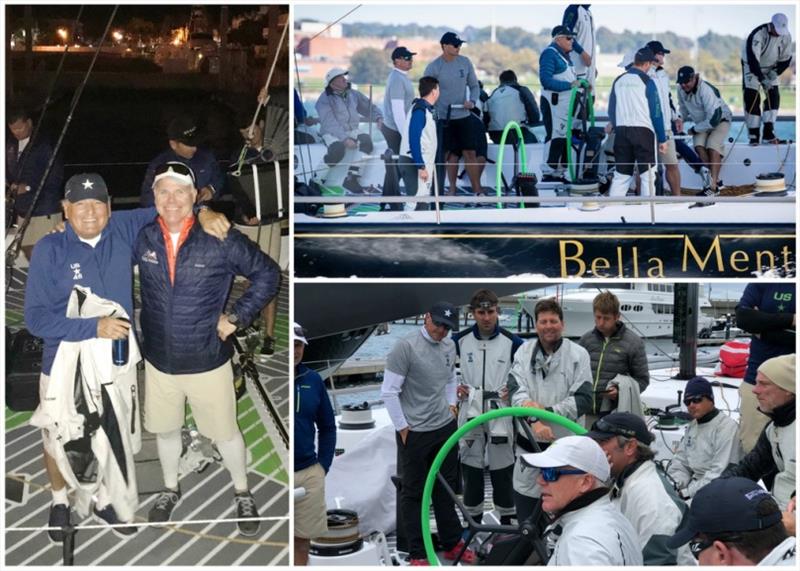 Clockwise from left: Hap Fauth with Terry Hutchinson after the Wirth W. Munroe Race, Fauth at the helm of Bella Mente during training, crew debrief after training. – photo © Jennifer Tille

Fauth agreed that the Bella Mente campaign will have its own energy separate from the American Magic campaign. “We’re going at this with the same discipline, the same passion and same commitment that we’ve applied to every one of our Maxi 72 campaigns,” he said. “We have the best people, the best resources, and we approach our sailing in the most efficient manner to get the best results.”

As CEO of the American Magic syndicate, Fauth says he and the other principals (Doug DeVos, Roger Penske) are giving their all to help their team progress to the America’s Cup finals to compete against defender Emirates Team New Zealand for the oldest trophy in international sport.

“It’s a path I’ve never been down before, but I’m pretty convinced I can handle this and the Bella Mente campaign at the same time,” said Fauth, pausing before laughing. “I have a great capacity for pain!”