Maserati during the Cape to Rio yacht race - photo © Imagina

It’s a natural dream for any serious bluewater racer to want to press their trade across one of the world’s great oceans. Such is the case with the Cape to Rio 2020 Transatlantic Race, which starts on the waters off of Cape Town, South Africa on January 4.

The first edition of this fabled race unfurled in 1971, giving bluewater sailors an adventure that coincided with Carnival season in Brazil.

Talk about incentive to sail fast!

While the race’s destination has occasionally changed over the years, the excitement of crossing the South Atlantic while enjoying (typically) downwind conditions after clearing Cape Town has never faded.

Unlike other major ocean races, the Cape to Rio Transatlantic Race unfurls on a triennial basis, giving motivated skippers and sailors ample time to prepare for this bluewater classic. And, true to its original roots, the 2020 edition of this classic should once again put sailors in Rio ahead of Carnival season.

I checked in with Luke Scott, race chair of the Cape to Rio 2020 Transatlantic Race, via email, to learn more about this exciting offshore race. 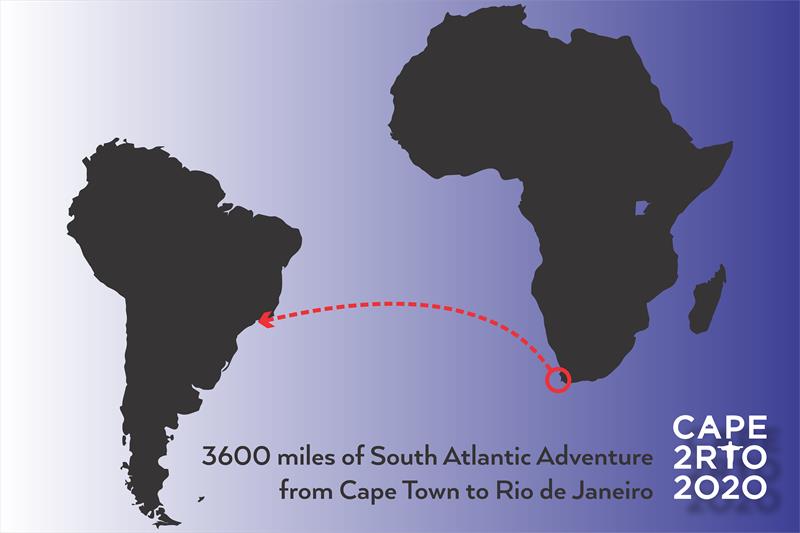 Can you explain the race’s culture to the uninitiated?

Since 1971, the triennial Cape to Rio Ocean Race has connected the of cities of Cape Town and Rio de Janeiro across the vast South Atlantic. It is the longest single transcontinental race in the world, and attracts club and professional sailors alike.

The race connects the iconic, exotic and historic in an incredible cocktail of deep bluewater sailing. Whether you are a hard-core racer, a family cruiser, or an avid adventurer, a memorable voyage awaits.

In your mind, what are the racecourse’s toughest segments or biggest challenges?

The first few days out off Cape Town can be a real rollercoaster ride, with strong following winds (or, in some cases, into stormy headwinds), before the fleet settles into the typically beautiful downwind tradewind sailing around the south Atlantic high pressure.

Staying out of the windless clutches of the center of the high pressure can be a race defining challenge. The approach to Rio has tricky winds and a minefield of traffic and rigs to avoid.

In that same vein, typically, what are the most enjoyable miles on the course, and what (typically) helps generate the all-important grin factor for skippers and crews during this stretch of the racecourse? 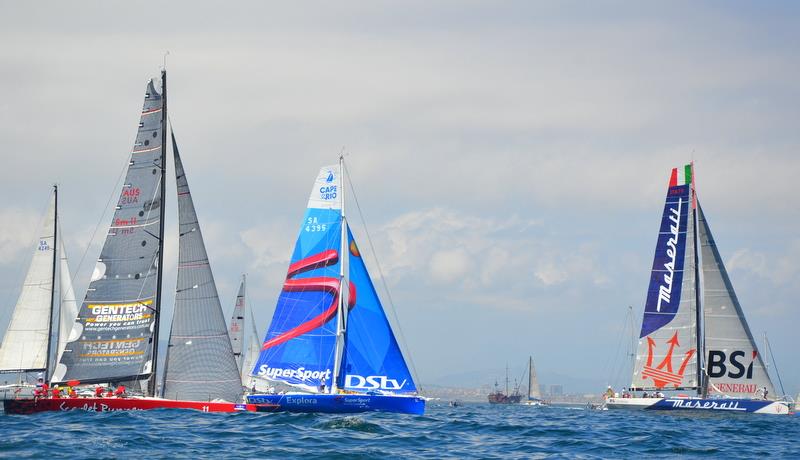 The Cape to Rio yacht race gets underway – photo © Imagina

What are the best-case and worst-case scenarios in terms of weather? Also, what is it about these conditions relative to the course that inspires your answers?

As a typically moderate downwind race around the South Atlantic high-pressure system, the race is typically a relatively kind, benign off-the-wind passage where the course around the high pressure is the main focus.

There have been editions with an extraordinary percentage of upwind sailing and some tough days getting away from Cape Town, where the weather can be quite windy in summer months.

Looking at the entry list, are there any teams that you have shortlisted for podium finishes? Also, any dark horses that have caught your eye? 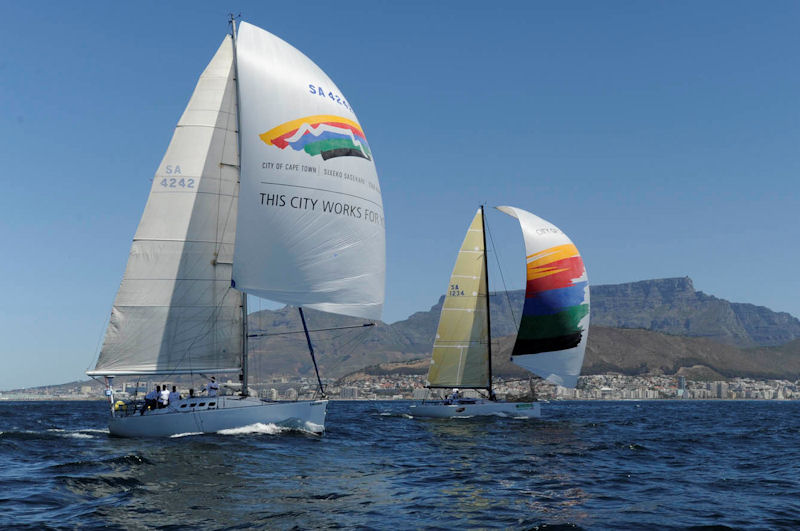 The next Cape to Rio Yacht Race will start on 4 January 2014 – photo © RCYC multihull elapsed time/line honors record is under threat from the two maxi trimarans, Maserati and Love Water.

The monohull fleet is wide open, and there are a number of competitive young teams vying for the podium. The 103-foot Southern Wind, Almagores II, is the second-largest-ever boat entered in the race. She is a luxury cruiser, not expected to challenge the monohull line honors record.

The youngest skipper is Michaela Robinson, age 19, on JM BUSHA 54 – Sailing for Peace and Unity in Africa. Youngest team has an average age of 17.6 years aboard Rotary Scout.

The race has not always ended in Rio.

While we understand that the Cape to Rio 2020 Transatlantic Race is an offshore event, can you tell us about any steps that you and the other event organizers have taken in the last couple editions to help green-up the regatta or otherwise reduce its environmental footprint?

The commitment of this edition of the race is to provide the #SAIL4GOOD platform for all entrants to support a cause or charity of their choice.

A number of entrants are addressing the environmental challenges of ocean pollution, plastics and waste management. Social projects, child welfare, health, and rescue services are other projects that are being actively promoted by the competitors.

It is very humbling to see the commitment of the entrants and their fans, and the challenges being made between boats to support each other.

The Race is also following the Sailors for the Sea “Clean Regattas” program, and the OSR Environmental Code. 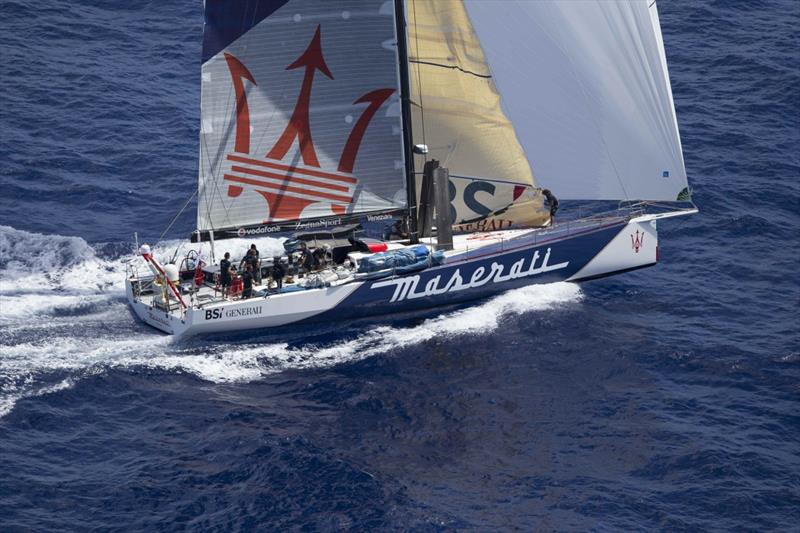 When a yacht race in 2020, sailed between the two Southern Hemisphere “third-world” continents, attracts and unites participation from five continents, one can only marvel at the continuing legacy and gravity that the almost-50 years of heritage, adventure and human endeavor that defines the Cape to Rio Ocean Race harnesses.

Every entrant has a compelling story, and collectively there’s an incredibly rich diversity.

Sailing is a rewarding sport for life, defined by harnessing the natural energy of wind and waves. Granted, in this race there’s the disarming attraction and exquisite raw natural beauty of Cape Town, linking to the exotic famous beaches and thriving Latino pulse of Rio de Janeiro.

But there’s so much more to it.

The start of the 2014 Cape to Rio Race © Trevor Wilkins Photography almost unfathomable deep blue depths of the South Atlantic, separating the continental jigsaw puzzle pieces of Africa and South America, holds a formidable peace… amidst this dramatic beauty is a magnet so much more potent, and this is the common purpose of the people who sail this race. They come in different shapes, sizes, colors and creeds, but they seek one goal, and together they will create indelible bonds for life.

The Cape to Rio Ocean Race salutes the accomplishments of all her past conquerors, applauds the bravery, vision, preparation, and lively sense of adventure of the current entrants, and invites the dreams and aspirations of future editions to embrace a tradition and legacy of one of our planet’s great ocean races, the adventure of a lifetime.

Editor’s Note: Landlubbers can track and follow the race via Yellow Brick. Additionally, interested readers can participate in the race’s parallel online game, which is available on the Virtual Regatta platform, and they can choose between a virtual Class 40 monohull or Mod 50 trimaran.