The tradewinds blew, then they blew harder, then they blew some more. The second running of the annual Caribbean Multihull Challenge (CMC), which took place last February 14-16 in the waters off St. Maarten, will be remembered for many things, but mostly for the breeze.

It wreaked its fair share of havoc, but when all was said and done, it also provided a stern test for the regatta’s best sailors, and produced a very admirable roster of winners.

“We want the CMC to be the meeting place for multihull people in the Caribbean,” said Race Director Robbie Ferron at the awards ceremony at the host St. Maarten Yacht Club following the third and final day of competition. We’re going to make that happen. Thank you all for being so tough this year. The winds were unusual. Much stronger. But you handled it.”

In fact, nobody handled it better than the crew of Finn, the sleek, beautiful 53-foot trimaran skippered by Australian Brett Trevillian and his crew of crazed fellow 18-foot skiff cowboys from the land Down Under. With four first-place finishes in four races, Finn blew away the competition to win CSA Multihull 1, and in doing so, also was named the Most Worthy Performer, emblematic of the most decisive win in the most competitive class.

“It’s been a crazy last few days,” said Trevillian, after receiving a beautiful timepiece from event sponsor Oris Watch for his efforts. “There’s been a lot of carnage. We actually broke our mainsail but managed to get it repaired in time. We’d also like to thank sponsor Mt. Gay rum. We drank quite a bit of you today. And we can’t wait to be back here next year.” 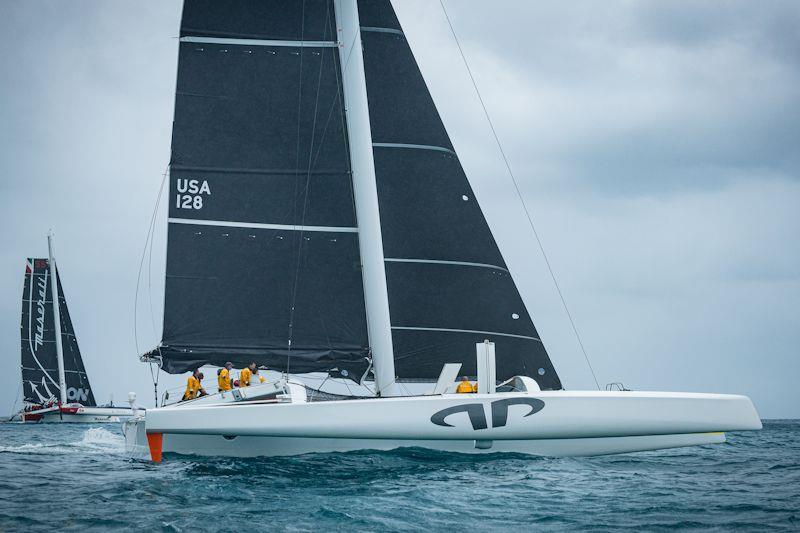 The other highly anticipated racing was in the MOCRA Multihull Class, where a trio of boats were using the CMC as a tune-up for the Caribbean 600: two MOD 70 tris, American Jason Carroll’s Argo and Italian legend Giovanni Soldini’s Maserati, and Shockwave, a 63-foot tri skippered by Jeff Mearing. Unfortunately, the tight racing never quite materialized, as Maserati retired on the first day, and Shockwave was out on Day 2 after breaking its boom. By virtue of sailing clean races in all three of the class’s contests, Argo was the undisputed victor.

Ironically, some of the best sailing was exhibited by one of the entrants in the Pirate Class, comprised of cruising multis. David Slater’s extremely well-sailed, vintage Outremer cat Delphine matched Finn’s fete by winning all four races. “It’s nice to come to a regatta where you don’t have to explain the kind of boat you sail,” quipped Slater, who was clearly used to sailing in events ruled by monohulls. 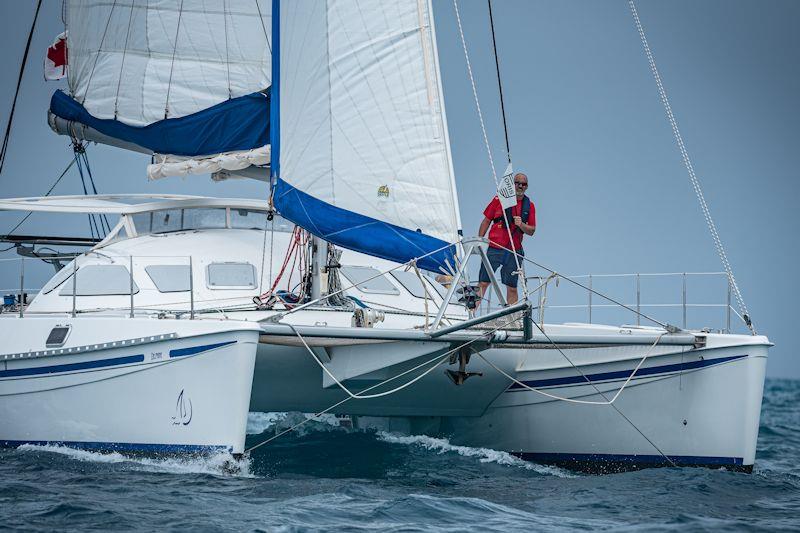 The CSA Multihull 3 winner was the Dominican Republic’s Georges Coutu, sailing a Leopard 50 called La Novia. Ferron is a strong proponent of getting what might be classified as production cruisers like the Leopard brand out on the racecourse. Of La Novia, he said, “They’ve shown you can take a very large, comfortable cat with a good crew and it’s fun for everyone. It all works.” Coutu said, “We’ll be back,” and Ferron clearly wants plenty of similar boats like Fountaine Pajot’s and Lagoon’s to join him. 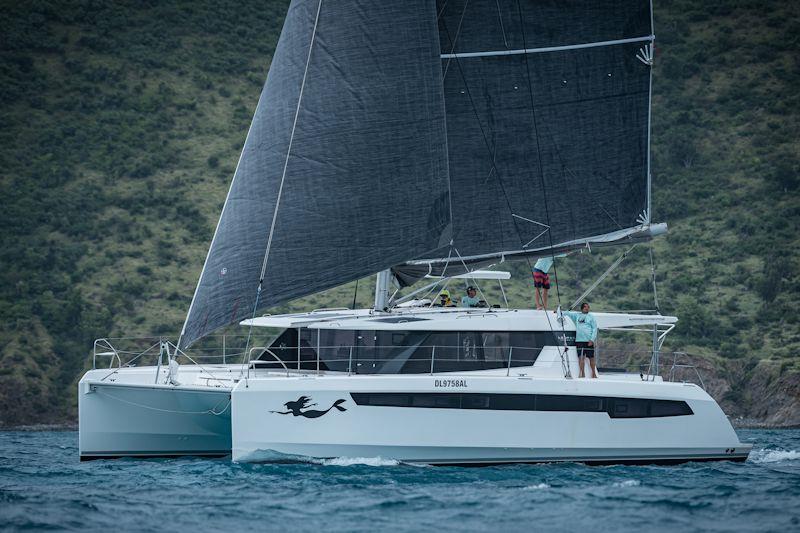 Sailing with an all-women crew, the Leopard 47 Seaduction, another CSA Multihull 3 competitor, won the event’s Spirit & Style prize, which was apt, as they’d sailed with plenty of both. And Tryst, Appie Stoutenbeek and Arthur Banting’s sweet red Newick tri, was the other major winner, taking CSA Multihull 2.

The CMC is now firmly established on the Caribbean regatta schedule, and the third edition is scheduled for February 5-7, 2021. Let it blow, let it blow. As the hearty multihull sailors who competed in the CMC II proved, they’re ready for anything. 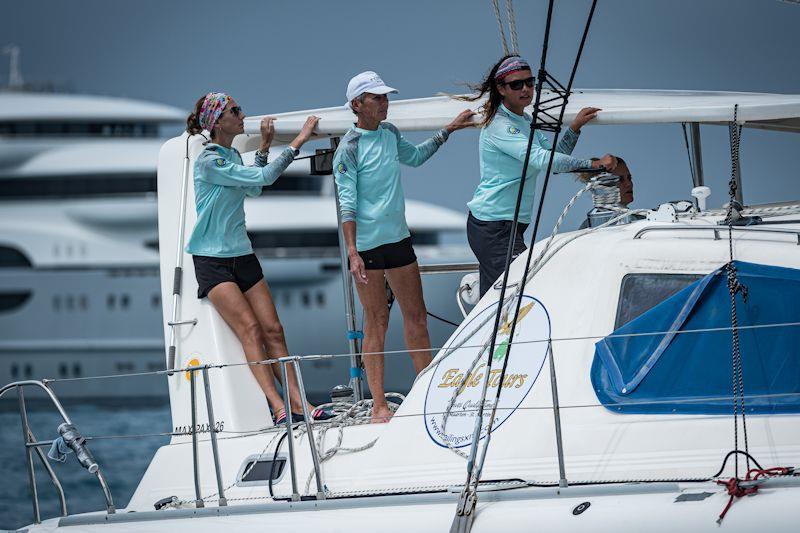 The Sint Maarten Yacht Club will host the thrid annual Caribbean Multihull Challenge from February 5-7, 2021. The event is open to all multihull sailors on racing catamarans and trimarans as well as chartered cats and cruising multis. 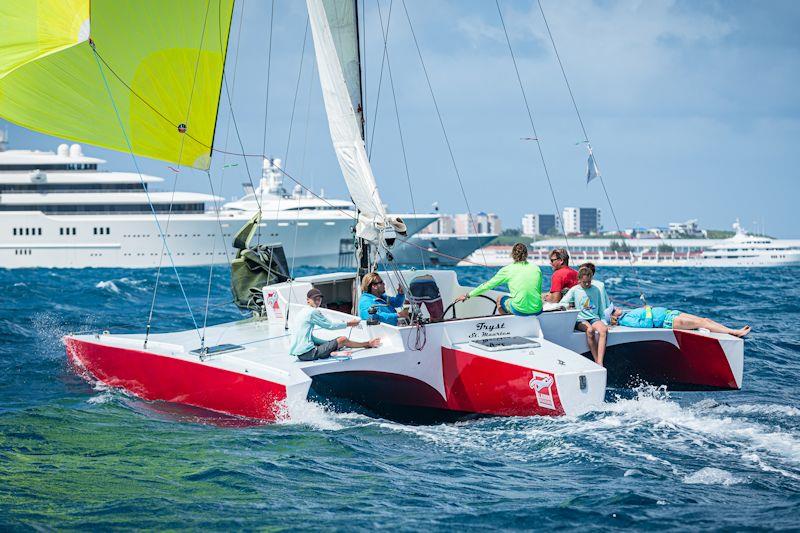