Competitors enjoyed a classic day of Solent racing today, with the race area largely bathed in sunshine and a west south-westerly breeze that built from 10 knots in the morning to gusts of nearing 20 by mid afternoon.

For the Black Group yachts the day culminated in a classic downwind finish against the tide past the Green to the Royal Yacht Squadron, with competitors gybing frequently in a building breeze.

Today was also Slingsby Ladies Day, a celebration of the many successes of women in sailing. More than 30 per cent of competitors here are women and around 100 women helms were racing today.

Class winners among them include Tilly Harrison, overall winner of the J/70 Grand Slam, Natalie Jobling in the double-handed class, Gayle Palmer’s Sunbeam, Hannah Stodel on Cobra in IRC Class 2 and Dawn Bee on Haggis 2 in Cruiser Division C. 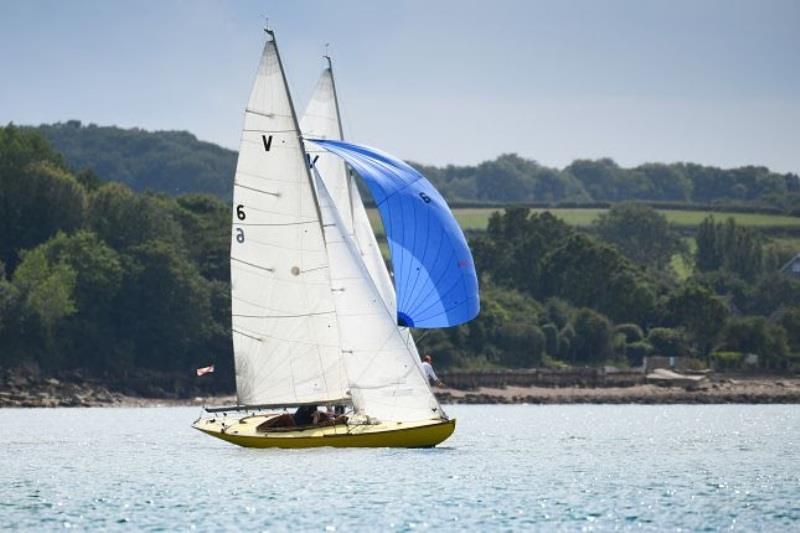 Alain Waha’s Spongebob led the SB20 fleet away at the start of their first race, having correctly identified how far back from the line the outer distance mark was laid. Peter Noes’ 6A Vision Homes and Charles Whelan’s Breaking Bod were just behind Spongebob, while Andrew Bell’s Dark and Stormy was a lone boat towards the inshore end of the line.

These four continued inshore after the bulk of the fleet tacked offshore onto port, one of the first boats to do so having been the overall leader at the start of the day, John Pollard’s Xcellent. Breaking Bod won today’s first race by an impressive margin, having pulled out a six minute lead on Matt and Chris Williams’ Carnage. Anastasia Morozova’s Am-Rusarc took third 50 seconds later, taking the mantle as first woman skipper in this race. There was much tighter competition further down the fleet – for instance the four boats in places 15-19 finished only 30 seconds apart.

Following a further two windward-leeward races from committee boats, Whelan emerged as the overall winner of the class’s Grand Slam event that took place over the first four days of the regatta. Pollard was second overall and Morozova third. The J/70 class also concluded its mini series today that similarly forms part of the fleet’s Grand Slam Series. Tilly Harrison’s Sorcha won overall victory five points ahead of Paul Ward’s Eat, Sleep, J, Repeat, while Victor Migraine’s Ohlala! took third. Both classes will continue to race for the rest of the regatta for the overall Cowes Week trophies.

The Etchells fleet took a totally different approach to their start 10 minutes after the SB20s, using the whole line and with some of the most successful boats close inshore. Around a quarter of the distance out from the beach Robby Boyd’s Sumo, helmed for Slingsby Ladies Day by Hattie Rogers, appeared best placed at the gun, while Rob Goddard’s Rocketman looked good near the inner distance mark. Eddie and Jon Warwick’s Audrey led an offshore group shortly after the start. 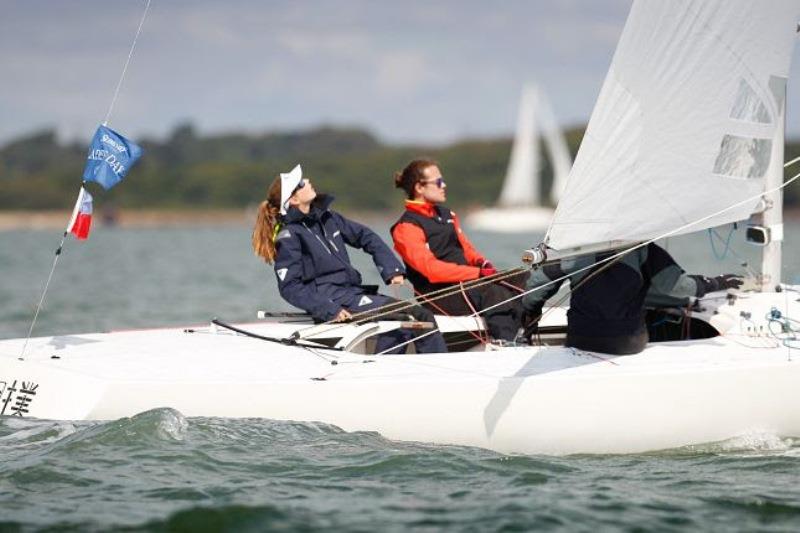 Despite having been held back when being luffed by another boat in the final few seconds before the start, Tom Abrey’s Jolly Roger soon took an early lead among the inshore boats as they tacked to the west. However there was much place changing as the fleet headed to the first mark near Gurnard. Sumo led the fleet down the first spinnaker leg, before losing places when gybing at the next mark.

The following leg, heading east across the mouth of Southampton Water proved critical for two reasons. A light northwesterly wind funnelling down Southampton Water met the stronger south-westerly from the western Solent here. Hattie Rogers was one of the first to notice the south-westerly filling in and so gybed towards it, which Abrey later experienced as an instantaneous 90 degree wind shift.

At the same time, the two leading boats – Shaun and Emily Frolich’s Exabyte and Rob Goddard’s Rocketman – misidentified the next mark, heading further north into Southampton Water. Initially much of the fleet followed them, handing an advantage to Abrey, who continued towards the correct mark thanks to the local knowledge of mainsheet trimmer Matt Reid.

Jolly Roger went on to win by a comfortable margin ahead of Sumo, with Eddie Warden Owen’s Colin taking third place 56 seconds later. “There were a lot of place changes today, which made it a really interesting and exciting race,” said Rogers. “We have the boat set up well and it feels very quick.”

IRC class 5 encompasses a wide range of designs and has therefore been split into two sections, reflecting that the IRC rule is very good at reflecting small differences between similar craft, but it’s inherently much harder to quantify difference between boats of widely varying designs.

“I’m very focussed on keeping similar types of boat together,” says regatta director Laurence Mead. “In this case it makes a better split to keep the lighter J/Boats at the lower end of the rating band separate from the larger and heavier boats.” The same thinking led to the new GRP classics class this year.

Only 28 seconds separated the top four boats on the water in IRC Class 5a. Despite having had a second-row start Mike Moxley’s HOD 35 Malice soon pulled ahead to lead most of the way around the course. However, on the final run the lower-rated boats astern started closing as the wind built from the west. 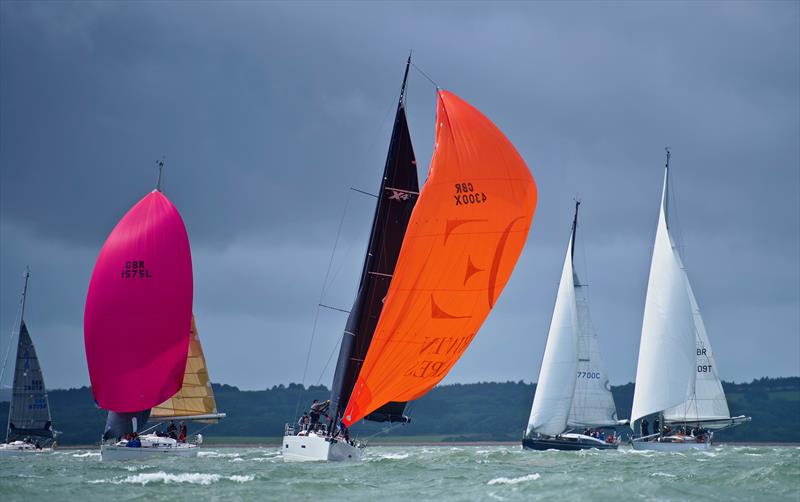 The entire Contessa 32 fleet bunched towards the northern end of the Bramble start line a minute before their start, before bearing away down the line. Eldred Himsworth’s Drumbeat made a great start in clean air mid-line, sailing fast and pointing high at the start of the long first beat. Rob Duke’s Gualin was also well placed, while Ray Rouse’s Blanco made what looked like a good start towards the southern end of the line, but appeared to be headed and in less breeze. 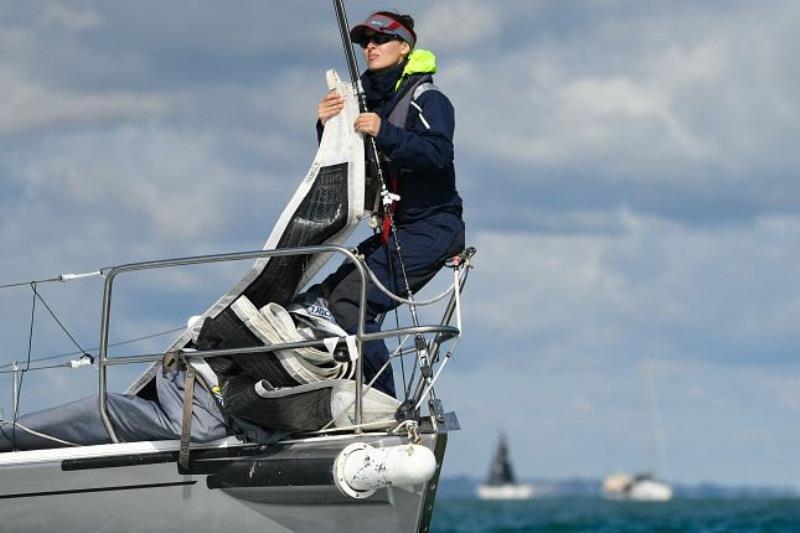 Whooper subsequently extended to a commanding lead on the water and took victory on corrected time more than four minutes ahead of another Mustang 30, Ian Handley’s GR8 Banter. Toby Gorman’s Sigma 33 Stan the Boat finished four seconds ahead of GR8 Banter, but slipped to third place on corrected time. 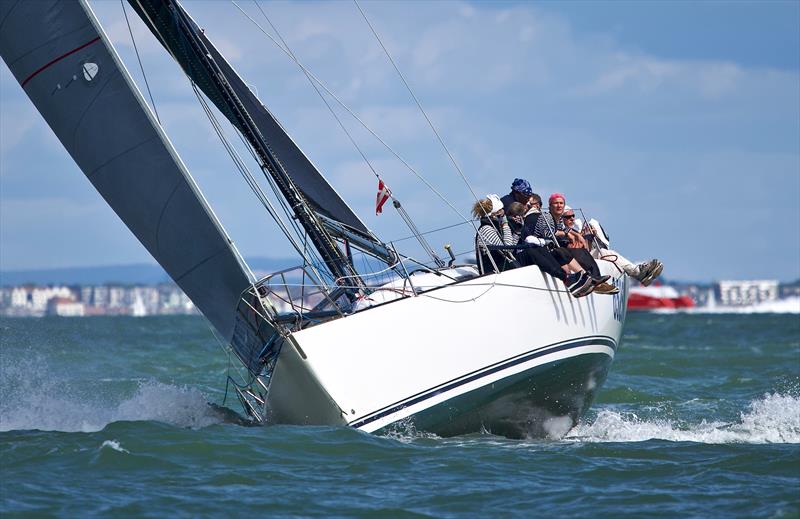 The wind was up to 10-12 knots and there was plenty of sun on the Solent by the time of the IRC class 7 start at 1100. Again the fleet bunched at the southern pin end of the line, with Tom Hill’s Albin Express 26 White Magic gaining an advantage over Jo Richard’s much modified 55 year old 18ft Alacrity Eeyore, which expertly wriggled into an almost impossibly small gap at the pin. Luke Goodall’s Sonata Wasp was also well placed as the fleet pushed towards the stronger favourable tide to the south of the Bramble Bank.

While some of the fleets ahead had been split by a rain storm coming off the mainland shore, the IRC 7 leaders all stayed in a favourable wind shift on the northern side of the cloud. Next was a long run against the tide in shallow water off the north shore. “It was classic Cowes Week racing,” said Hill. “We were with the Quarter Tonners, so there was lots of talent in 25ft boats, all of us racing in less than two metres of water.”

Hill judged the lay line out into stronger tide at the bottom mark well, powered up with the pole against the forestay, before a short windward leg and then a run close to the island shore to the finish. Two local boats – yesterday’s class winner Kevin Downer’s Fun 23 Ziggy and Craig and Emma Dymock’s J/22 La Vie en Rose – took the shallow passage inshore of Gurnard Ledge. However, they were disadvantaged by their asymmetric spinnakers and White Magic remained ahead at the finish, despite having taken the safer offshore route. 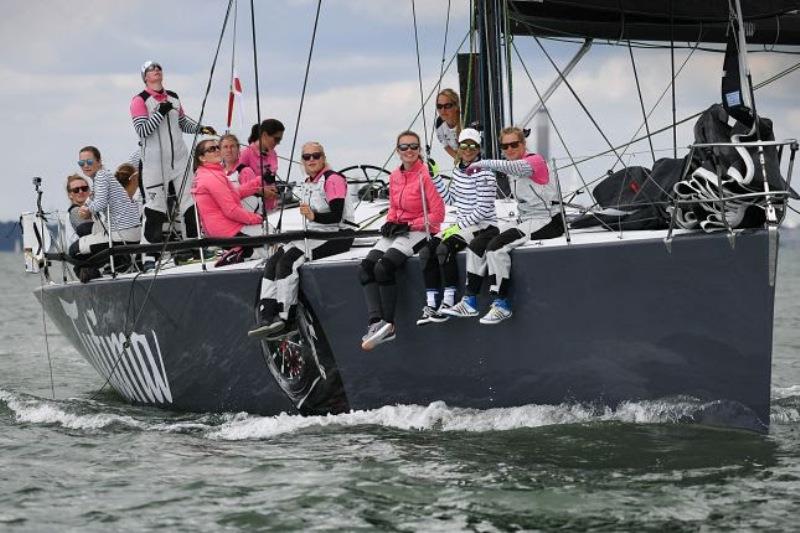 La Vie en Rose crossed the line three seconds ahead of Ziggy, but lost out on corrected time both to her and to Chris Halewood’s Sonata Kallista, which took third on handicap.

“I’m really pleased to have won again on Ladies Day,” says Jobling. “We had a bit of a poor start but managed to recover and play the shifts well up the first beat. We then had a couple of fantastic downwind legs, which favours the J/105, and an interesting tussle round a crowded mark at the top of the second beat. We had a fantastic day and are really enjoying the close racing.” 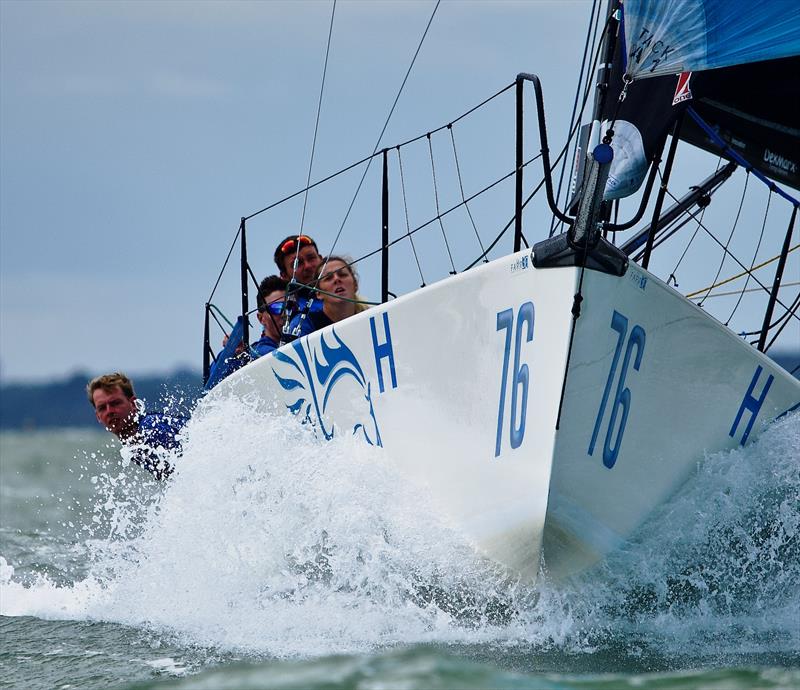 Dawn Bee’s performance on the Mustang 30 Haggis 2, earns her the Slingsby Ladies Day Best Helm trophy. This will be presented at a ceremony at Northwood House this evening, when the winner of the main Slingsby Ladies Day trophy will also be announced.