The competition will be strong, with over 80 boats expected on the three courses, including three Ultime multihulls, just as many Multi50s, 25 Figaro Bénéteau class boats, a dozen Class40s, several Multi 2000s and many IRC yachts, sailed double-handed and with crews.

There will be a French Grand Prix this summer! The Formula 1 Grand Prix, that should have been held on 28 June in Le Castellet, is cancelled, but the first Offshore Grand Prix will leave Cherbourg-en-Cotentin on Sunday 19 July. A new label for the Drheam-Cup, under the impetus of organiser Jacques Civilise: “Originally, the third edition was labelled Open de France de France de Course. Because the name “Open de France” already exists in dinghy sailing, to avoid confusion and with the agreement of the French Sailing Federation, we have decided to rename it the “Grand Prix de France de Course au Large”. The underlying idea is the same: reaffirm the specific character of ocean racing among the very different worlds of sailing. An event open to all types of sailing boat, all sailors, professionals and amateurs, all formats, crewed, double handed and solo”. 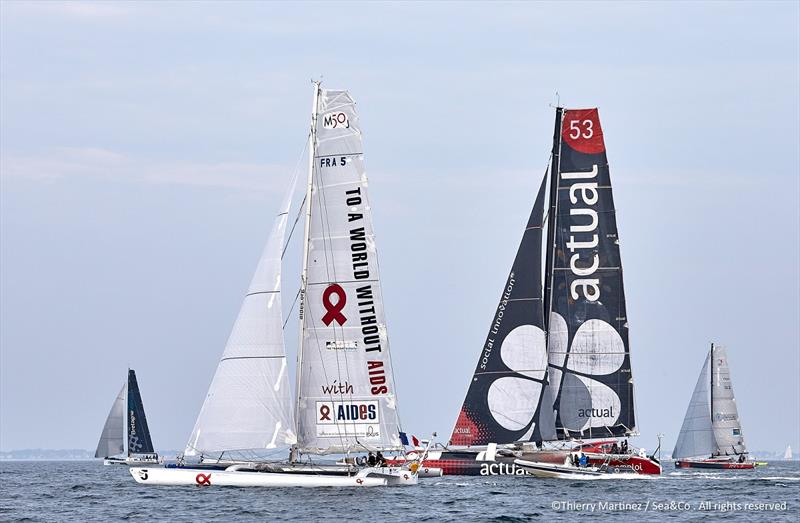 There will be something for everyone in the first multi-class race this season, that will bring together over 80 boats between Cherbourg-en-Cotentin and La Trinité-sur-Mer. Three 32 metre Ultime trimarans, Edmond de Rothschild Maxi (Frank Cammas/Charles Caudrelier), Sodebo Ultim’ (Thomas Coville) and Actual Leader (Yves Le Blevec) will race on the largest course, the Drheam-Cup 1100 (1100 miles). Several Multi50 will take the start of the Drheam-Cup 700 (736 miles), including Thibaut Vauchel-Camus’ Peloton-ARSEP and Leyton (former Arkema, winner of the first edition of the Drheam-Cup in 2016), which will be raced for the first time by skipper Arthus Le Vaillant. Between 10 and 15 Class40s will also be joining in, including Swiss duo Valentin Gautier/Simon Koster’s on the recent Banque de Léman and the Drheam-Cup (and Route du Rhum) title holding Lombard plan, skippered at the time by Yohan Richomme, and now by Nicolas Jossier, as well as several Multi 2000s (raced by La Trinité-sur-Mer skippers Charlie Capelle and Yann Marilley).

Most of the fleet will take the start of the Drheam-Cup 400 (428 miles), between 35 and 40 IRC yachts, crewed and double-handed, and some 25 Figaro Bénéteau 3, as the Drheam-Cup-Grand Prix de France de Course au Large is a qualifier for the 51thedition of the Solitaire du Figaro, starting in August. With a little over a month to go before the solo race, the current leaders of the class will take the start in Cherbourg-en-Cotentin to fine tune their boats, from Armel Le Cléac’h to Cherbourg native Alexis Loison, as well as Fabien Delahaye and Gildas Mahé. Let’s just say that as in the first two editions, the Drheam-Cup-Grand Prix de France de Course au Large will once again reward great sailors.

It will also shine the spotlight on clubs, and in a nod to Formula 1 racing, boat builders, with special Grand Prix de France de Course au Large trophies presented to those who stand out between Cherbourg-en-Cotentin and La Trinité-sur-Mer.

To better symbolise the open spirit that is in the DNA of the Drheam-Cup-Grand Prix de France de Course au Large, the French Navy will join in the celebration, as the communications director of the Channel and North Sea maritime Préfecture has stated: “The French Navy is a close partner of the sailing world. With their common values, sailors and skippers understand each other, they all live and work in the same highly demanding environment, the sea. An appreciation of hard work, determination and team spirit are the key to success in an offshore race and in a rescue operation at sea. The French navy is ready to intervene 365 days a year, 24h a day, on all the seas in the world. For this first Grand Prix de France de Course au Large, the public service patroller Flamant, based in Cherbourg, will welcome onboard the French Sailing Federation race committee to give the start of all races in the Cherbourg outer harbour, before returning to its usual operations.”