This really is something you looked forward to. It was on the same racetrack as the super-successful 2018 Etchells Worlds.

It was being staged out of the same club; namely at the Royal Queensland Yacht Squadron. By and large, many of the same competitors were back for more. Well those who live nearby in a global sense, anyway…

Yes, all of these ingredients, plus some more tremendous weather, had the 27 entrants for the 2019 Etchells Australian Championship totally geared up. Now you could say that a fleet of this size is down on the usual 40+ that this particular title usually attracts. However, when you consider just how many brownie points had been used up from out of the collective jar just late last year, then actually, it is a stellar effort. One the friendly and positive crew from the Brisbane Etchells can be truly proud of.

Yet it won’t be long before Etchells gather again for a large fleet of that size, with the impending NSW Championship in the middle of February bound to get a healthy fleet in attendance at the delightful Gosford.

So for now, it is important to focus on which of the 12 crews that on paper could win the national title, and to reflect on the 10 Corinthian crews, the cornerstone of the Class worldwide, and determine who will take home the perpetual trophy for that division. Overnight this will be Land Rat – John Warlow, Todd Anderson and Will Thompson. The Brisbane Fleet has also freshly minted versions for second and third places in this important division, which as it stands right now are Animal House, and Just 2 Funny.

Light Easterlies greeted the humid morning in Brisbane. Indeed the parts of Moreton Bay leading up to the docks that service the city would have been happy to have those almost zephyr like gentle wafts wandering in towards them, for they had a glass out. Still, as the morning progressed, so too did the strength and determination of the breeze to let all go racing, so by the time everyone was well and truly on station by the middle of the day, the Answering Pennant really did not spend a lot of time aloft before the first of three races for the day got under way.

First it made sure it could hold say 6 knots, and by the end of the day it was a legitimate 10 with some puffs making 12, and it was all from 045 to 060 degrees. The axis of the course was always inside these numbers and the range was from 1.1nm to 1.3 at the end. The infamous tide was all out by 1030hrs local (AEST) and coming back in, which is effectively North to South, by 1630. Today the differential was not so great, so there was nowhere near the same kind of venom in it, as had been the case during the entire World Championship. Most liked that idea… 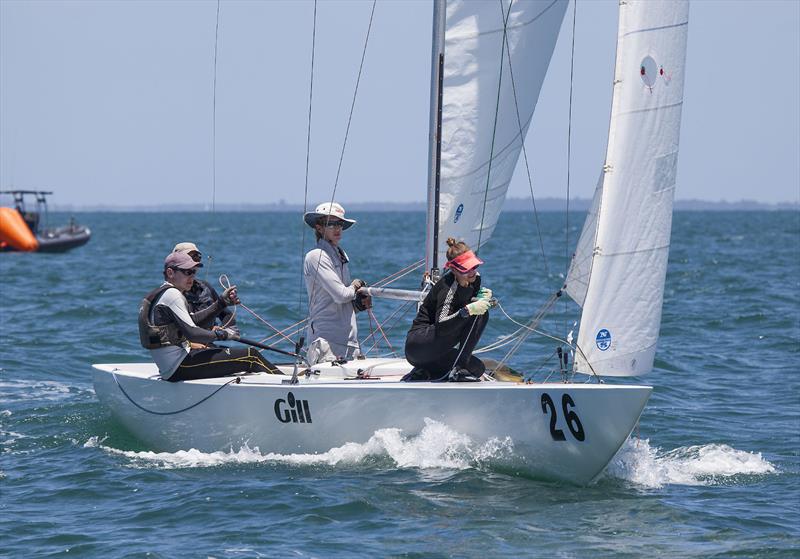 The racing was as spectacular as the weather. A General Recall in race two kind of proved how keen everyone was, and so the U Flag came out for the restart, with Tango being forced to sit that one out. No time was wasted in ensuring it was part of the equation for the final of the three races, and here four crews received the call for being On Course Side, or over the line. Doh.

Two retirements with a backstay that got taken out by the bow of another vessel might have been the end of it, but just near the finish another retired after the race when the collected the pin end of the line. The vessel with the broken mast hobbled ashore and got to work on installing the replacement one, offered up by another of the fleet who was not using it, and so there should be a full contingent back out on the water tomorrow.

As there could be some light weather to come, PRO Louise Davis’ move to hold three races to day could well be prudent, as over the next three days they now only have complete four more races to complete a whole series. Nice one.

So given all of that, it was kind of fitting that it was the newly installed and therefore reigning World Champion, Lisa Rose, that won the first race. Martin Hill, Julian Plante, Mat Belcher and Sean O’Rourke pretty much looked like they just came back out as if it was the next day of the World Championships from back at the end of October.

Afterwards, Martin Hill would say, “It was wonderful to get that win in the first race. I guess you can put a lot of pressure on yourself, after winning the Worlds, so it was very nice to win the start, lead around the first mark, and continue on from there. That was good, but the reality was that in Race Two we certainly got a reminder of how hard it really is in a fleet like this. We picked the wrong end of the line, and so we were at the back of the fleet. A penalty turn after the top mark for the first time well and truly sent us astern, but we worked our way back into the middle of the fleet.”

“A better result (7th) in the final race has us in there overall (5th place), which is terrific. We are quite happy with our results, and certainly Havoc had a great day, which is wonderful to see. There are lots of people out there to watch, and so the journey will continue. Those races where you have to recover really count. Making up 10 places can make a huge difference at the end, and in a way, more so than being either first or second. I said to the crew that I enjoyed that second race because I had more boats to pass. There is no easy boat out there to pass, and that is why it is such good racing”, said the effervescent Hill with a smile showing the enjoyment.

And so with that tremendous segue from Hill, Iain Murray, skippering Havoc with Colin Beashel and Richie Allanson on board, said after their win in the final race, “It is always nice to go out there and come home to say we sailed well today. We got a good start and that meant we could tack when we wanted to. The boat has good speed in those wind conditions (and relatively flat water), and it all meant we could sail where we wanted to sail. Beasho and Richie did a great job on the wind and the shifts, so we were in a nice spot at the first mark. Some defending on the run and stepping away on the next work to windward sealed it for us.”

“It certainly is easier from the front, rather than the pinball machine further back. It was a beautiful day’s sailing out there, and nice to get three races in, and get ahead of the curve really. The Race Committee did a nice job.” 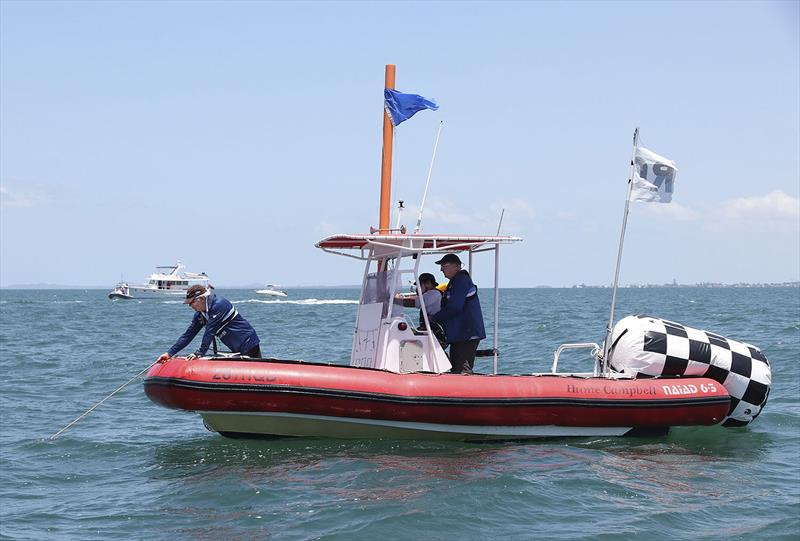 Four places astern, and in second place overnight, also certainly with a very consistent performance is the local boat, Gen XY. For the 2019 Etchells Australian Championship, she is crewed by Matt Chew, Brian Donovan, Ben Vercoe, and stepping into the mix for this regatta is famed Laser sailor, Mitch Kennedy.

Chew commented on the day’s sailing, “There’s always a bit of pressure on, but we enjoy that, so that’s fine. If you want to be at the top, then there are always people who will be trying to get at you, so being chased is fine. We had a really good day, and all three races are keepers, so that is terrific, when you consider the regatta is almost halfway done. We certainly do strive for the consistency, so thanks for noticing that!”

“We had a bad start in the last race. Had that not have occurred it could have been a REALLY good day. In the end we had to do a bit of comeback in the last race, so we’ll certainly take it as it stands. Bring on tomorrow and the rest of the regatta. We aim to be ready for whatever gets delivered wind wise.”

It is always good to see a famous boat keep on keeping on. In this case it is John Bertrand’s old Triad, AUS 1383. She won a race at the 2018 Worlds under skipper William Voermann, and now has a new owner in Kirwan Robb, who picked her up a week ago, no less. Sailing with him for this regatta are the youngest ever winning skipper of the Australian Cadet title, Hugo Allison (he’s also won a World title as crew), Sam Tiederman (an SB sailor from Tasmania), and the very experienced, Darren Jones.

Robb has been part of the Etchells fraternity previously, and is also a previous winner of the Australian IRC Championship (Div2) with the Beneteau First 45, Ikon. “We enjoy the One Design racing aspect of it all, especially a few of us from the big boat, and we did a bit of SB20 work in Hobart, but were only doing a couple of regattas a year in it, so we went back to the Etchells, where we had been happy 10 years ago. By a tried and tested formula in Triad was all part of the plan. Today (they sit in fourth overall tonight) really was a reminder of why we got the boat, because it is such close racing and all done within boat lengths. It is awesome, and they all go pretty much the same speed. The tactical scenario is really good fun. Having Darren on board is all part of the plan to ensure we are set up correctly, on the pace, and can move forward with it all as we develop.”

Racing continues tomorrow, with timing and number of races to be determined based on the weather. Please keep and eye on Facebook and the fleet website for updates.

More information at www.facebook.com/EtchellsAustralia (including live video from on the water) or etchellsbrisbane.com or www.etchells.org.au 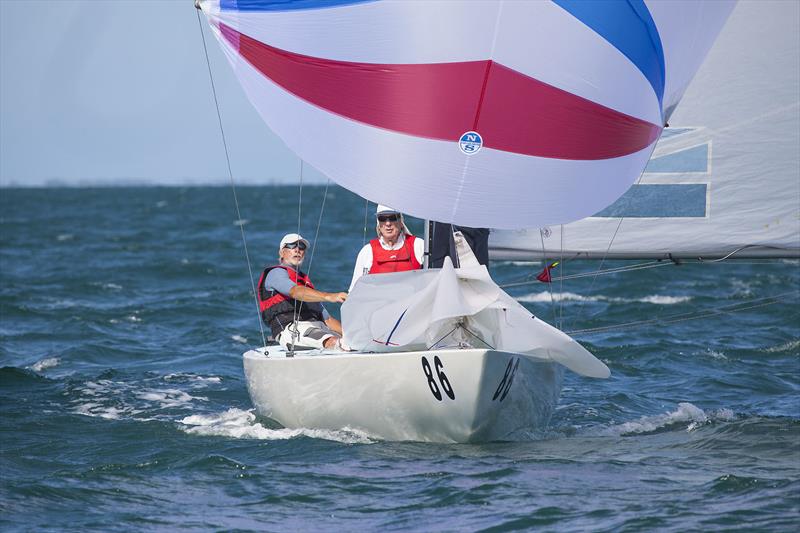