Chris Poole (USA) edged past Harry Price (AUS) in the final match of today’s Ficker Cup round robins, to cap the leaderboard at the conclusion of two days of Stage 1 racing.

Joachim Aschenbrenner (DEN) found his form and solidified his third place position, with Dave Hood (USA) fourth, rounding out the quartet who will advance to semi-finals.

Tomorrow, an international field of sailors battle for the esteemed Ficker Cup trophy and an invitation to the Congressional Cup, during the final stages of this perennial Long Beach Yacht Club event. Moderate southwesterly wind and warm temperatures are expected for Sunday’s semi-finals, petit finals, and finals.

Light conditions had the fleet of eight boats on dock hold this morning, until the westerly filled in and delivered a pleasant 12 to 16 knot breeze.

Poole and his Riptide Racing Team had a flawless day, winning all seven matches. “It was a good day for us. We improved on a couple of things we wanted to from yesterday, and there were a couple of races that were a little closer than we liked. But it was good to put some pressure on the crew, and get the crew work down now, instead of in the semis.”

“The crew is doing a phenomenal job,” Poole added, “and we’re looking forward to seeing how tomorrow goes.”

Price had an unblemished record coming into today’s races. But in Match 11 against Charlie Lalumiere (USA), Price was OCS at the start. Lalumiere, close abeam, blocked Price from cracking off and returning to the line. By the time Price peeled off and atoned, Lalumiere had a solid headstart. Price and the Down Under Racing Team were reeling in Lalumiere, but ran out of race course. Lalumiere won by a boat length: his only win of the day. Price logged an overall record of 11-3.

The top two Ficker Cup finishers go on to the Congressional Cup which starts April 3. But in addition to being a qualifier for that event, Ficker Cup is a Grade 2 match race; meeting strict criteria established by World Sailing, the governing body for the sport. It stipulates everything from race management and formats to judging and scoring, the types of boat used, on-the-water maintenance and repair, hospitality, and the level of racing. 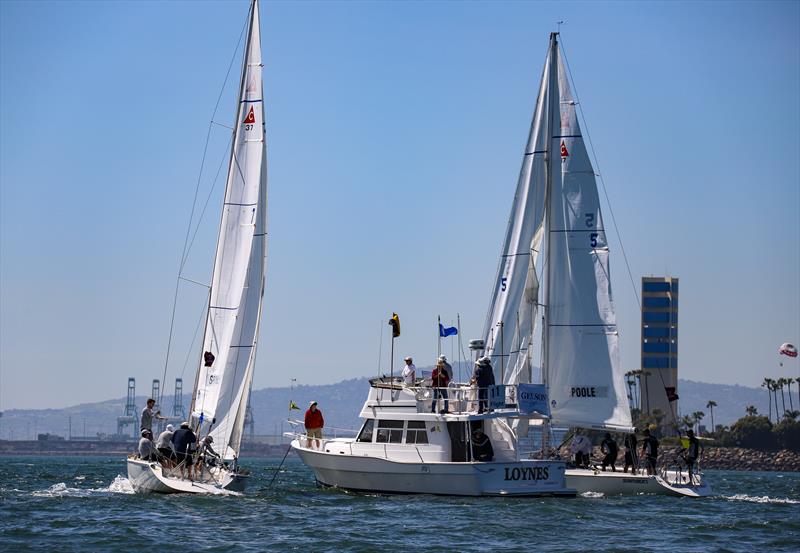 “The competition is stiff,” declared Pearson Potts Jr., who enjoyed just one victory today. “Every mistake is capitalized. It’s definitely whoever makes the least mistakes, wins.” His team Guardians of the Monohull is one of four non-professional crews competing this weekend. “We’re trying to be the real true amateurs who make it to the Congressional Cup.”

But first, he conceded, there’s Ficker Cup. “This is helping us learn the boat. It requires a lot more teamwork and coordination, and is a lot less forgiving than other boats we sail.” The one-design fleet of Catalina 37s was designed and built exclusively for the Congressional Cup.

Qualifying for that, he said, remains the aspiration. “One hull, one dream, is our motto.”

Racing for the Ficker Cup continues tomorrow, Sunday March 31, at 11:30AM adjacent to the Belmont Veterans Memorial Pier, at 15 39th Place, in Long Beach, where spectators are invited to enjoy the action, free-of-charge.

A prize giving will be held at Long Beach Yacht Club Sunday after races, and presentation of the Ficker Cup trophy, honoring the legendary America’s Cup helmsman Bill Ficker. 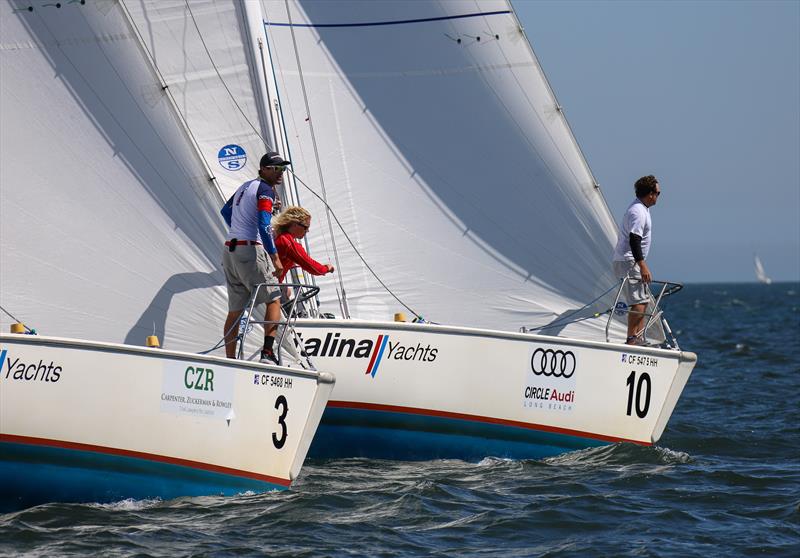