On 23 May, the latest addition to the Gitana fleet got back down to business.

The past two months have been fast-paced for the Gitana Team and its two new skippers, Charles Caudrelier and Franck Cammas.

The end of the refit, the launch, the discovery of the Maxi Edmond de Rothschild and the offshore flight, validating and starting on the production of future developments… the results of these first few weeks are proving to be very positive. In a little less than a fortnight, the Rolex Fastnet Race takes place, despite it being contested in crew format, and will be the perfect clash in this training phase – before our duo turns their full attention to the main event on the sports calendar, the Brest Atlantiques at the tail end of this season.

Recruited back in April, Franck Cammas and Charles Caudrelier have quickly found their bearings within the five-arrow team. A month after their arrival, the Maxi Edmond de Rothschild was relaunched after more than six months of repairs to fix, among other things, the broken bow on the starboard float, the damage to which was serious enough to force Gitana to retire from the Route du Rhum. Since that time, the two sailors, supported by the members of their shore team, have been out multiple times on the 32-metre giant. 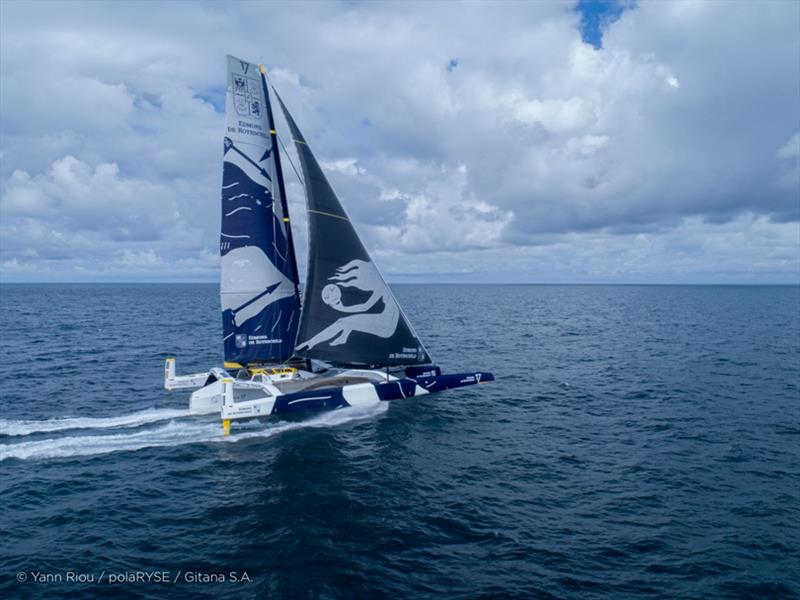 Maxi Edmond de Rothschild © Yann Riou / polaRYSE / Gitana S.A. The steady pace of work and the time spent on the water all counts because this November they’ll be setting sail on the long looped Atlantic circuit, which stretches for 14,000 miles between Brest, Rio de Janeiro and Cape Town. The skippers of Edmond de Rothschild share their first impressions both about being on the boat and their integration into the team led by Ariane and Benjamin de Rothschild.

“We’ve been working fairly intensely in a bid to discover more about the boat, get to grips with the first modifications, adjust the finer details, transform the sails and familiarise ourselves with the appendages. It’s satisfying because by getting out on the water we’ve been able to really look at the details, whether it be offshore or during our daily sailing trips,” explains Franck Cammas. This feeling of intensity is one shared by Charles Caudrelier: “The first two months have been hard work. We’ve learned a great deal and the pace has been fast, but every day has been fun too. On a technical level, the boat is very exciting and we are surrounded by a highly skilled team. There’s a healthy competitive spirit among us all. Franck has a very technical profile too, which provides a further boost to things. The Maxi Edmond de Rothschild is an exceptional machine and really is a cut above everything else around! The experience on board is incredible and we’re very lucky to be able to sail a boat like this. We’re gradually learning how to control her, but we’re still a long way off getting the absolute best out of her. Every day we’re learning a little bit more and making progress with the boat.” 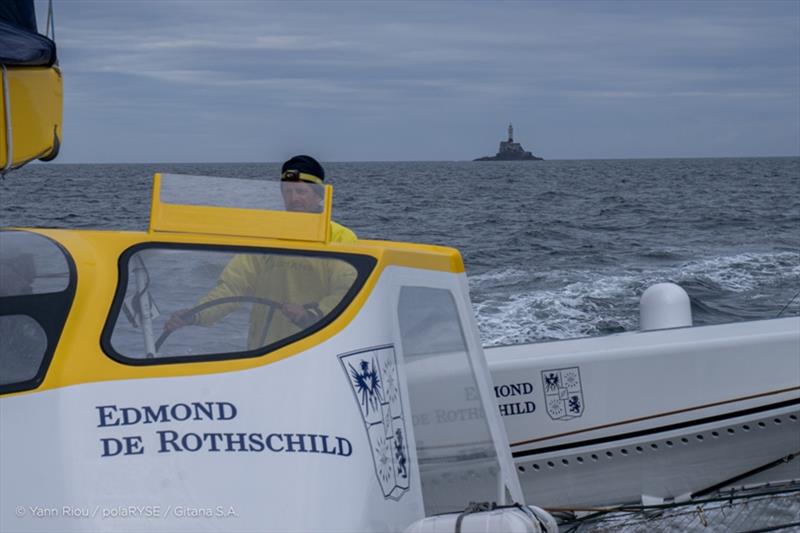 “Our integration within the team has been pretty natural and very positive. Having already sailed here between 2013 and 2015, I know the guys well and Franck knows the vast majority of them too. That’s enabled us to very quickly get to the heart of each matter and be efficient. In the space of a couple of months, I think we’ve already done some great work together. Certain teething issues with the boat have been resolved and we’ve developed the boat’s sail performance a bit and sorted out some of the issues with the steering system,” explains Charles Caudrelier, whilst his co-skipper discusses the initial feelings related to offshore flight: “The Maxi Edmond de Rothschild is a safe boat, whose volume instils confidence as you’re high up on the water and the appendages have a big surface area so they absorb the impact. All that translates into an ability to attain a true flight mode, something that I hadn’t experienced before on this size of multihull, even with Banque Populaire last year.” 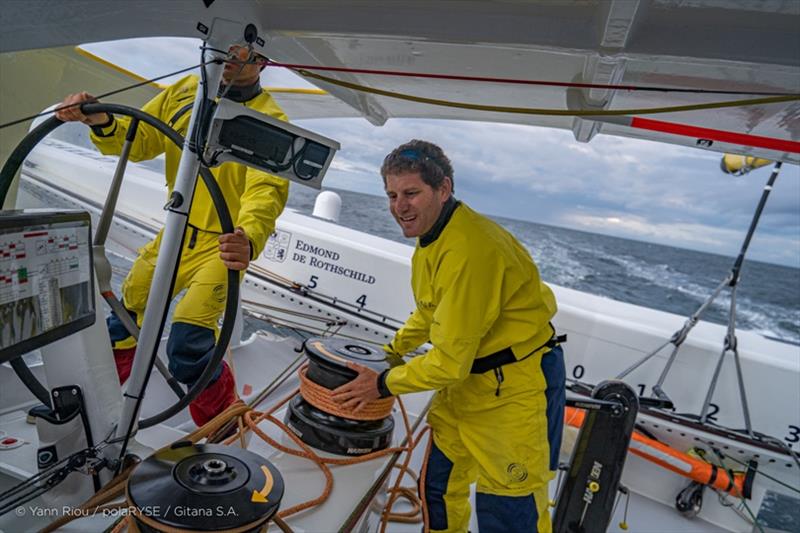 It will be somewhat alien for Franck Cammas to consider the Rolex Fastnet Race as a mere training race. Known for his tenacity, the skipper from Aix-en-Provence never hits the start line of a race without wanting to perform well, a mindset that’s largely defended by Charles Caudrelier. For all that though, the two men remain focused on the main event of 2019 this November and have geared their season towards this accordingly.

“From the launch to the Fastnet, we knew it would be a technical discovery phase and that’s why it’s the perfect opportunity to do the race in a crewed format. After the Fastnet, we’ll switch mode. The idea is to perfect our performance aboard the Maxi and our double-handed configuration in the Brest Atlantiques. We have a 2,000-mile qualification to validate, which will be a very effective part of our training schedule and something we’d like to do in August.”

Preparation always involves a clever mixture of development whilst increasing reliability. The development aspect is key as there is constant innovation and the boat is permanently evolving with every lesson learned from the on-the-water training sessions. Reliability is also crucial because in order to win races you first have to finish them! “The main focus is to last! Making fast headway is good, essential even, but longevity is more important now as a 25-30-day race awaits us in 3 months’ time with the Brest Atlantiques. In race format and at the pace at which we envisage driving our boats, it’s a major technical and sporting challenge!” explains the reigning champion of the Volvo Ocean Race.

On 3 August 2019, the Maxi Edmond de Rothschild will be venturing into the English waters around the Solent for the first time in this the 48th edition of the Rolex Fastnet Race. A legendary event, it’s a race zone very familiar to the Gitana fleet and notably the monohulls of Benjamin de Rothschild’s father, Edmond de Rothschild. In fact, it’s worth noting that the baron and his men added their names to the list of event winners in 1965 with Gitana IV, a magnificent 27-metre wooden yawl, which bagged the event record – 3 days 9 hours 40 minutes – that stood for some nineteen years.

Aboard the Maxi Edmond de Rothschild, the crew will be targeting Banque Populaire V’s race time of 1 day 8 hours 48 minutes and 46 seconds (set in a breezy 2011). However, the main focus for Franck Cammas, Charles Caudrelier and their crew will be the confrontation with the three other competing Ultimes – Actual Leader, Macif and Sodebo.

For this first real-life test in fleet format, the duo on Edmond de Rothschild has chosen four sailors with an eclectic profile to accompany them: David Boileau, boat captain of the Maxi, Erwan Israël, a great racer and a familiar face on these fabulous machines after his various campaigns aboard Spindrift, Morgan Lagravière, a talented helmsman and outstanding Figaro sailor who is just discovering this universe of giants, and last but not least Yann Riou, the future media man for the Brest Atlantiques and a Gitana Team stalwart.