Balboa Yacht Club today regretfully announced the cancellation of the Governor’s Cup Youth International Match Race Championship that had been scheduled for July 20-25. The Governor’s Cup is the oldest youth match racing event in the world, only two years younger than the renown Congressional Cup which last week cancelled its 56th running.

“We will be back next year to make the 2021 Cup the best ever,” said event Chair Christine Robertson Gribben. “Happily, none of this year’s invited skippers will reach their 23rd birthday by the end of next year’s “GovCup” to be held July 19-24, 2021, so all will again be age-eligible if they continue their match racing success.

Although, we sadly presume we won’t see three-time runner-up Leonard Takahashi who will represent Japan in the 49er class in next year’s Olympic Games. 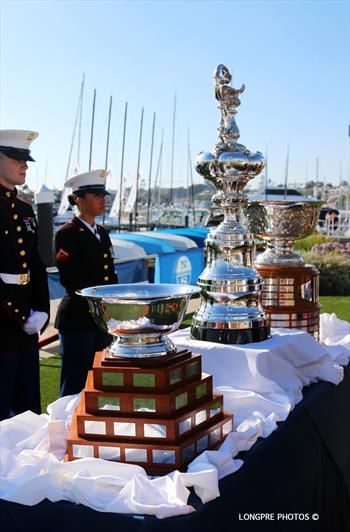 Three of the most prestigious match racing trophies in the world; the Governor’s Cup, Congressional Cup, and America’s Cup at the 50th Anniversary Governor’s Cup in 2016. Two of the three have been cancelled for this year. © Mary Longpre

BYC cancelled the event based on the unanimous vote of the Governor’s Cup Steering Committee. Committee Chair Andy Rose noted that “It was a very tough vote for all of us. But, after a thorough briefing by BYC Fleet Surgeon and internationally prominent neurosurgeon, Dr. Rob Bray, on the COVID-19 situation, and extensive communication with invitees and coaches, we determined that holding or postponing the Cup until later in the year was not feasible”. Dr. Bray’s Disc Sports and Spine Center is also the presenting sponsor of the Governor’s Cup.

“Even if the eight international teams could have made it to California, most would have faced fourteen-day quarantine and perhaps other restrictions upon returning home,” Rose continued and summed up the decision, “While Dr. Bray had designed an extensive testing protocol for the event he agreed that recent developments in the spread of the virus make it impossible to host the Cup in the manner in which teams, coaches, and BYC members expect of us and in fact, it became highly unlikely that all or even most of invited skippers would ultimately be able to attend.”

The Notice of Race, the event brochure and information on requesting an invitation for the 2021 Governor’s Cup will be posted on the Cup’s website www.govcupracing.com in January, 2021.