Long-time Melges 24 sailor Gary Schwarting believes he had some help from above this weekend to win the Helly Hansen NOOD Regatta overall title today in St. Petersburg.

Schwarting’s Obsession won the Melges 24 fleet and was selected among the regatta’s other class winners to represent St. Petersburg at the Helly Hansen NOOD Caribbean Championship in the British Virgin Islands in October.

“I’d like to dedicate this win to my friend George Haynie (longtime Melges 24 owner) who passed away Monday,” Schwarting says. “He should have been sailing with us this weekend and I think he was watching after us and got our name picked out of the hat.

“I’m in shock but it sounds like a ball and I can’t wait. We had a great weekend racing here with all kinds of conditions; I sailed with a group of really good sailors and fun people, and it all just clicked.”

For the first time in its 33-year history, the NOOD St. Pete moved from its traditional February slot, and the Sunshine City showed off its spring break charm for the 120 teams competing this weekend to deliver the full package of wind, waves and fun in the sun.

Coming into the last race today in the 10-boat Lightning fleet, it was a toss up who would take top spot between Jenna Probst, Laura Jeffers and John Bauman. Probst, who sails for the University of Michigan sailing team, recently began skippering the family Lightning, named this event as Nobody Puts Baby in the Corner. She raced this weekend with her mother, Deb, and brother Tanner.

“Given how the first two races went today, we knew going into the last race that we had Jeffers and Bauman to contend with for the win,” Probst says. “The starting line was very pin-end favored and all three of us pushed each other to try and get poked out in front. And… we all ended up over early; not our best move,” she laughed.

“It definitely made for an interesting race. Thankfully we were able to recover and stayed dialed in, focusing on boat speed and somehow stayed ahead.” 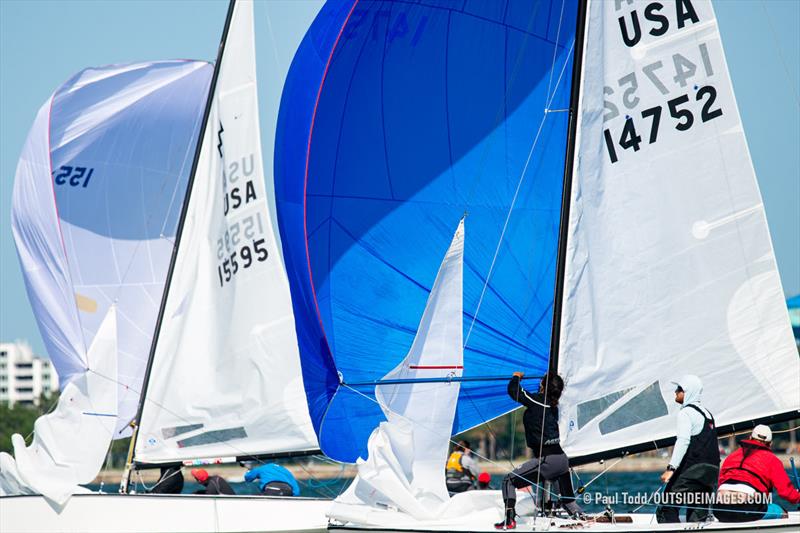 The teammates really enjoyed the young vibe of the Thistle fleet. “Big thanks to Kevin [Bradley], who really pulled everybody together so we had a fleet for our first NOOD,” Hunter says. “It was great to see how close the fleet was and always pushing each other. One mistake would definitely cost you a lot.”

While it was a shifty weekend with many gains and losses to be had, depending how the teams played the wind, Baker says their weekend motto was to be in striking distance of the fleet. “Today, we really focused more on the fleet than watching the wind. Our goal was to stay in touch, make little decisions to pick up boats and it ended up paying off well.”

According to Hunter, there was a lot of discussion around the shifts on board their boat, but it’s his job as skipper to focus on boatspeed.

E.L.E., owned by Matt Braun and skippered by his son, 17-year-old Guthrie, won the J/70 class today sailing with All-American collegiate sailors Patrick Shanahan calling tactics, and Hannah Steadman trimming main. The all-amateur team’s attitude coming into the weekend was to “Just do our best and sail our own races,” Braun says.

“Even though this was a smaller fleet than typical for the J/70s, it was a tight group of well sailed boats. This is a talent-laden fleet so it was a real thrill to sail against that kind of talent and do well. This is the last regatta for E.L.E. before I put her on the market, so what a way to go out with a ‘mic drop,’ and the win. 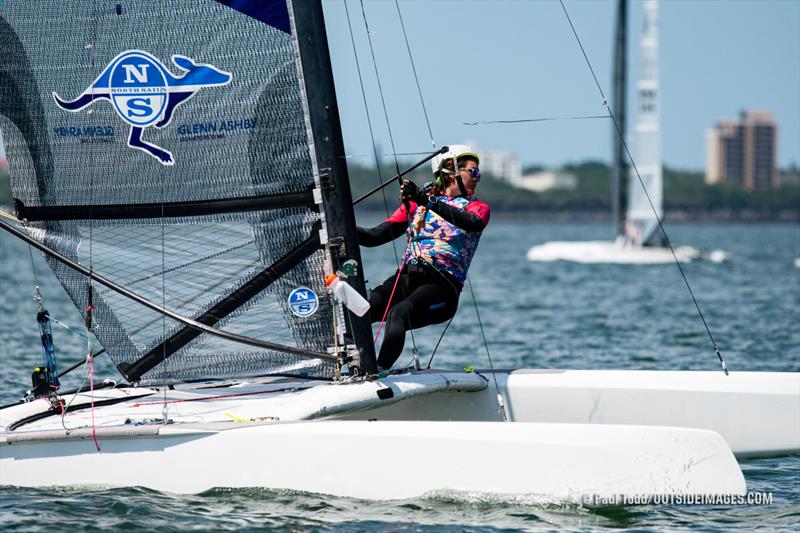 Ravi Parent flew away with the A Class Catamaran Foiling class win against the 13-boat foiling fleet, keeping a perfect scoreline of eight first-place finishes over the three days across the varying wind conditions. While this is his first official regatta in the A Cat since he jumped in one year ago, he’s been training hard at his home base in Sarasota over the past year, and in true “A Catter” form, he’s already into his second boat.

The 24-year-old is looking toward next year’s A Class Catamaran World Championship, scheduled for St. Petersburg in April 2022, and this weekend proved valuable to test out new techniques he’s been working on. Parent’s ambitions stretch much further than next year’s worlds, however. He says the boat is the perfect cross-training platform to help achieve his 2024 Olympics goal to qualify in the foiling Nacra 17 class. Cam Farrah, who also races an A Cat foiler and finished this weekend in eighth place, has the same ambitions.

“The A Cat foiling class is undergoing a really rapid evolution,” Parent says, which is one reason there’s been a strong uptick of new sailors joining the fleet. “As the boats continue to evolve, they’re getting more efficient, faster and even higher performance. It’s driving the athleticism of the class and that’s appealing to a lot of the younger sailors. I know that’s a big draw for me. But, I also see myself in this class long term. I really like being on the frontline of development.”

In the 24-boat A Cat Classics fleet, Woody Cope edged out Ben Hall with two race wins today to win the fleet. 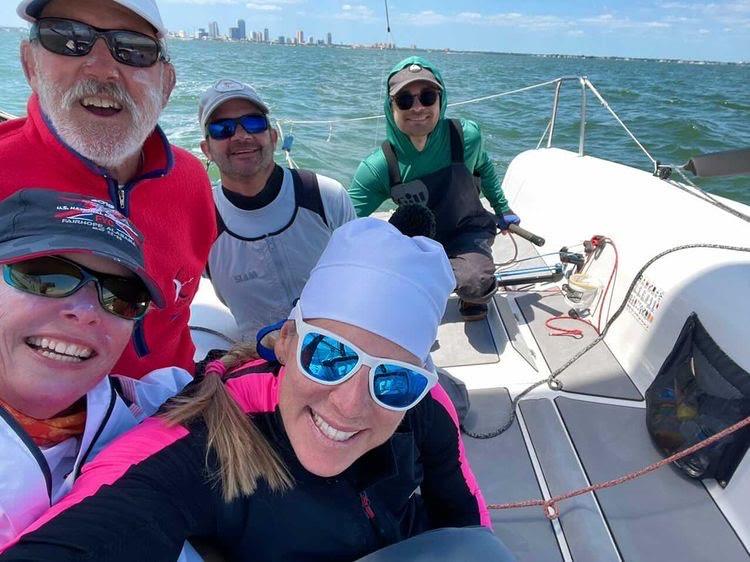 The St. Pete-based Martin 243 TackTick, owned by Michael Siedlecki and driven by Andrew Cheney earned top honors in PHRF 1. At 24 feet, TackTick is the smallest boat in the nine-boat fleet consisting primarily of 30- to 40-foot boats, which Cheney said put a premium on them having good starts and getting to the windward mark in good position. “Otherwise, there are a lot of wind shadows with the bigger boats.”

He said yesterday’s windier conditions helped the team to secure its overall first place, but Cheney admitted the team got lucky when the race committee abandoned the intended fourth race that day due to major wind shifts. “That was our one awful start,” he said. “We jumped the gun and were over early, and then got caught on the wrong side of every wind shift. We dropped way back into the ‘B fleet’, so we got very lucky they called off that one.”

Next stop on the NOOD Regatta Series is Annapolis, April 30 – May 2, followed by Chicago in June and Marblehead in July.

For more information on the NOOD events, visit www.sailingworld.com/tags/helly-hansen-nood-regattas.