The second stage of the 51st La Solitaire du Figaro will take the 35 strong fleet of solo racers to the most easterly finishing port ever. Starting from the Baie de Saint Brieuc on Sunday at 1100hrs local time the 404 nautical miles leg crosses some of the busiest shipping lanes in the world to finish off Dunkirk where the leaders might be expected to arrive late on Tuesday night.

“It will be the first time I have sailed into the North Sea.” chuckled the very composed and discreet race leader Xavier Macaire, 39 year old skipper of Groupe SNEF who starts the leg with a margin of just one minute and 35 seconds over the Bretagne CMB Performance team’s fast rising star Loïs Berrehar who is ten years his junior.

The North Sea may be new territory for Macaire – in theory the North Sea starts east of the Dover Straits – but so also is wearing the ‘yellow jersey’ leading the famous annual La Solitaire du Figaro. But the French Solo Offshore Champion of 2015 has been dealing well with the added pressure of being leader. 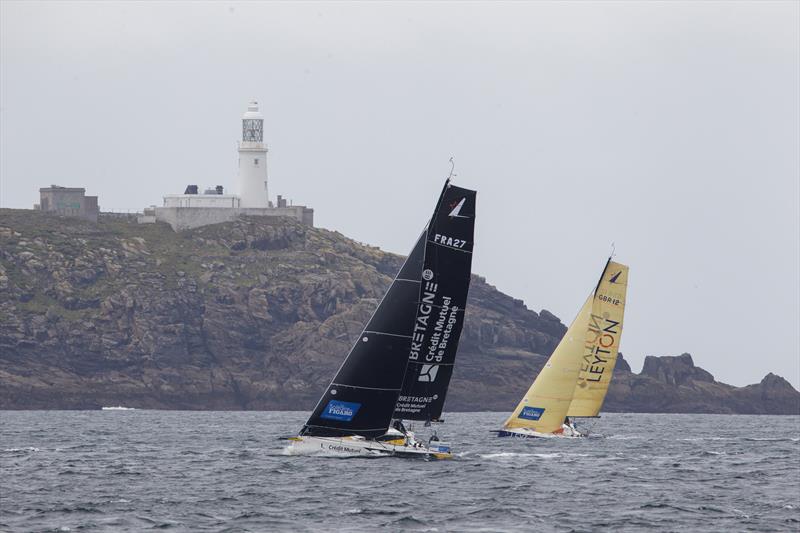 A former marine carpenter and composites specialist who served his time in the production and custom yards on the French Mediterranean coast before he moved into the Mini 650 Class where he sailed 12 races in a production Pogo and won six events and took two second places before moving into the Figaro.

He would be forgiven for thinking he is due the overall title. Twice in consecutive years, 2015 and 2016, Macaire was denied leg victories which might have seen him win outright. In 2015 he sailed into a restricted area 18 miles from the finish and was given a one hour penalty which dropped him to third overall behind Yann Eliès and in 2016 he dropped to third on stage 3 into La Rochelle because of an eight minutes penalty for a broken seal on the support for his fire extinguisher.

“As always, there is a lot of pressure. To be honest it feels like normal pressure at this stage just the pressure of competition, to the desire to do well because of course this is the most important race of the year. I would be lying if I said have no pressure. But it is not in any way linked to my victory on the first stage, it is all about my desire to continue to sail well, to not make mistakes on the next stage. And that starts with concentrating on preparation, you have to be organized and methodical, take things one by one so that you can start with no additional worries only focused on the stage.” Macaire said today in Saint Quay Portrieux. 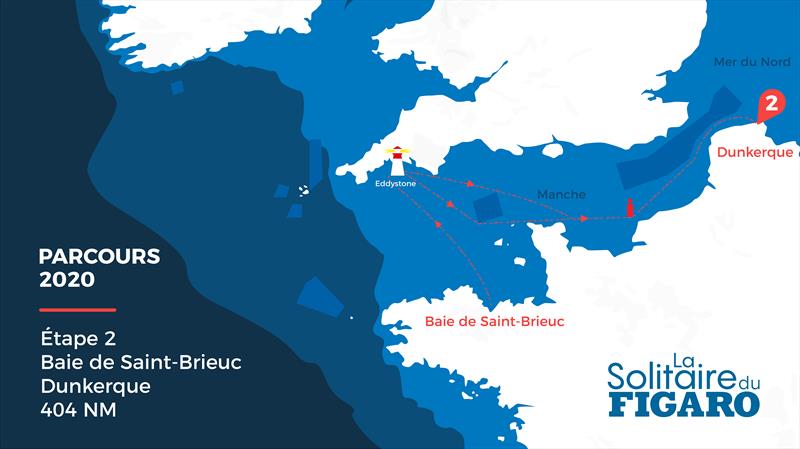 Because of the forecast light winds for the first period of the race the course has been shortened, the northernmost turning mark is now Eddystone off Plymouth and not Wolf Rock off Lands End as programmed.

“The original course would have been four days but with a big stage starting again on the Saturday and that I absolutely wanted to respect the three days for recovery, we shifted the course to the This still allows us to respect the philosophy of the stage “, explains race director Francis Le Goff.

Compared with the 642 miles first stage to Fastnet and back this second stage in the Channel should be more straightforward and there should not be too many chances for big gaps to open – or, conversely close, for those pre-race favourites who have found themselves down the leaderboard after stage 1. That said the top ten are within 22 minutes of Macaire, Briton Sam Goodchild (Leyton) in ninth and Ireland’s Tom Dolan (Smurfit Kappa) in 10th, both elevated a couple of places by jury decisions against two French sailors who missed a mark on the final miles of Stage 1.

“On paper, this is not a stage where there should be huge gaps,” confirms Adrien Hardy (Ocean Attitude).

“We have a big upwind leg to go up to the English coast and then we go downwind with still a little wind so there don’t seem to be any big traps on the course.” adds Frédéric Duthil (Technical Veil-Cabinet Bourhis Generali). ” It’s going to be more of a speed race and we will certainly see the leaders of the series who have a good basic speed at the forefront. ”

While Goodchild and Dolan would be happy with a similar, steady consistent second leg, Britain’s Alan Roberts (Seacat Services) is 56 minutes behind Macaire and 34 minutes outside the top ten. He was unlucky to become stuck in a wind hole on the first night, along with several other top seeds like himself.

“I am full re-charged and full of energy for this next leg. I was unlucky with that one hole but otherwise I was reasonably happy with the way I sailed. That is the way it happens sometimes on La Solitaire. But my philosophy stays the same. I won’t be risking more at this stage. If it was four or five hours behind that would be different but I just want to go out and stay in contact with the lead group and not do anything extreme.” Roberts explained.

Macaire: “The Azores high pressure extends to the English Channel and Brittany and we are in the high pressure curve so we will have a west-northwest wind. When we go up northwards towards England, we will be wedged between this high pressure which moves to the east and a low pressure to the north of Great Britain with a good flow from West-North-West. Then we will have a fairly strong West-South-West flow between England and Dunkirk, so we will do a good part of the stage downwind. It will be fun, there will be some fast stuff! If the wind is strong we will be more towards survival mode, if it is moderate, it will mainly be driving and positioning. ”

The finish into Dunkirk is likely to shaped to some extent by the TSS at Calais which takes a lot of ocean.?

“What is certain is that the TSS funnels our sailing area, we will be between it and the coast, which is also quite high there. But normally should be downwind so we should not have to tack along the coast against the current in a tight small-gain mode. We will have to focus on the positioning and speed of the boat in this last phase of the stage. In any case, I am going to sail in the North Sea for the first time, it will be great to discover a new sailing area.”

Sam Goodchild GBR, 9th (Leyton): “The sections are shorter on this stage, I don’t know if that is to be benefit or not, I feel I am a good allrounder rather than having one or two particular strengths. The beat to Eddystone is the most complicated bit depending how long we take to get there. It will be 18-20 hours to get there, but the weather on the way across is complicated at the moment with the models not really agreeing. But a lot will depend on the timing getting to Eddystone, you can be hiding from the tide off Start Point or getting accelerated round there. I don’t think anyone knows that area any better than anyone else as every time you go there the tide is different or the wind is different. But for sure the first 24 hours are dominated by where the wind is. The wind should kick in from Monday afternoon and then it should be relatively straightforward.

I seem to have the boat speed to spend most of the race in the top 10. There are a few things I’d like to do better. Tidying up my trajectory a bit around the decision making areas. A few things i am learning about the boat, like when it’s a good time to get sleep and when you have to be on deck to go fast. I managed to enjoy the sailing which isn’t always the case when you’re constantly worrying about the race and consequences of all our decisions. 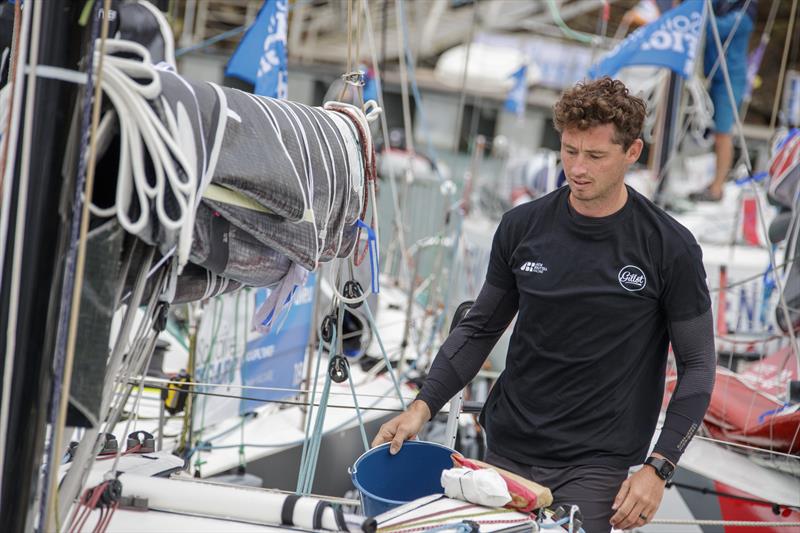 Phil Sharp, 29th (OceansLab): “One thing in the Channel for sure is weed and how you deal with it. I had two back ups and then went full astern on engine (ed note: as the race rule now permits) and even then I had to dive to get a big piece off which was wrapped round the keel. It is always hard to know what to do about it and when.

I think it could be tactical at Start Point, it will be quite crucial there depending on exactly when we get there in terms of tide. I have been pretty happy with my upwind and downwind speed. Frustratingly for me after the Scillies I had no speed under the gennaker, My gennaker is a bit flat and I felt like I was missing sail area, I was that slow. I was totally off the pace and whatever I did the boat would not move. I was pretty happy with the ways things were going, I had had a good race with Anthony Marchand and Eric Péron after the Fastnet. Otherwise I was happy with the way I sailed. The end did not go the way I wanted.

This leg I think the finish will be interesting with lots of gybing at close quarters at the shipping lanes with people calling for water.”