Next week the IMOCA class of 60ft foiling monohulls comes together for its unique annual showcase regatta – the Défi Azimut or Azimut Challenge – that features speed runs, a spectacular round-the-island course and a solo offshore contest of 500 miles.

Now in its 10th year and sponsored by Azimut, the Brittany-based digital solutions company, the Défi Azimut has become an established annual treat for fans of the most exciting monohull racing yachts in world sailing.

Each year the solo offshore race – the “48hr-Azimut” – serves as the final big test prior to the main race of the season which this year is, of course, the Vendée Globe solo round-the-world race that starts from Les Sables d’Olonne on November 8th.

The fleet for the 2020 Azimut – based out of France’s “Sailing Valley” at the Brittany port of Lorient – includes many of the IMOCA class’s top stars with 20 skippers taking part.

Among them are favourites for Vendée Globe glory including Jérémie Beyou on Charal who dominated this event last year, Charlie Dalin on Apivia, Thomas Ruyant on Linked Out, Kevin Escoffier on PRB and Sébastien Simon on Arkéa Paprec.

The fleet includes 14 boats fitted with foils. Among them are several with the latest “version 2” designs which will be “flying” on the Azimut’s inshore courses, demonstrating the awesome power these super-fast yachts produce which is expected to take the fastest of them around the world in less than 70 days.

Fans can expect a special treat as the event gets under way on Wednesday with an afternoon of “speed runs” when the skippers, with guests on board, will wind up their boats for a series of one-mile dashes along the coast at speeds of up to 35 knots. This is the closest sailing gets to drag racing and the skippers and crews relish the chance to sail at the limit.

The following day – back on board on their own with a media person on each boat – the skippers set sail on the 500-mile offshore race, a triangular course out into the Bay of Biscay and back on Saturday afternoon. Then comes the final part of the regatta, the now-traditional sprint around the Île de Groix which always produces spectacular images of the fleet racing against the imposing cliffs of the island.

The record for the “Tour de Groix” stands at one hour, eight minutes and 10 seconds, set by Vincent Riou and his crew on PRB in 2015, for the 17-nautical mile course. This year, given the right weather conditions, that mark could be smashed by the fastest boats in the 2020 Azimut fleet. 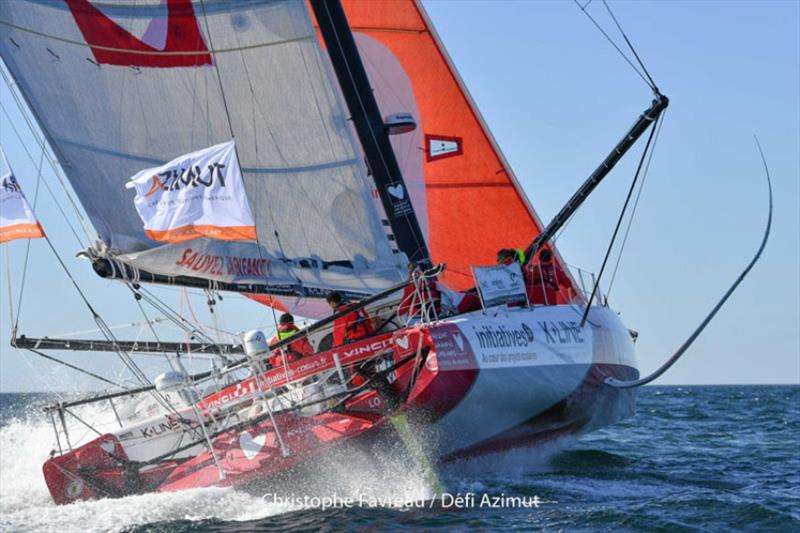 Sam Davies loves the Défi Azimut and will be relishing the chance to show what her latest Initiatives Coeur can do on the solo ocean course.

“This year the offshore race is even more important than usual because it has been a bit of a crazy year because of the pandemic and we haven’t done as much sailing or racing as we had hoped,” she said, “so this race will carry more importance.”

“Obviously this is the Vendée Globe year and it’s the last race before we head off round the world, so the idea is to try things out for the last time,” she added. “The race committee and the organisers are really keen to make it a race that is useful to us in terms of testing the boats, having a great course and nice angles to sail that we will find in the Vendée Globe. And you know that the media will be judging you and maybe the outcome of this race will determine who gets posted as favourite for the Vendée Globe.”

A very popular personality with French fans, Davies enjoys the relaxed atmosphere of the Azimut. “It’s been an important event for us for a long time and for me it’s very cool because it’s on home territory. It’s great to be able to race from Lorient – it’s a lot simpler and takes less time and energy to enter the race,” she said.

Jérémie Beyou will again be among the favourites for the spoils at the Défi Azimut, but the Frenchman who won the Vendée-Arctique-Les Sables d’Olonne Race earlier this season, is planning to have fun as well as compete.

“The Azimut Challenge is a really good time to share what we do,” he said. “In the end, it’s the only opportunity to show our boats up close, to share our sensations, to make ocean racing come alive. There’s everything to enjoy, every moment: speed runs with partners, a solo race to measure yourself against others, the tour of the island of Groix to push the boats.”

“I’m not going there with a goal of results because we have validated all the boat’s improvements, but I’m going there because it’s a great moment all together,” he added.

And the Swiss sailor Alan Roura is another competitor ready for the unique experience of the Défi Azimut regatta. “The Azimut Challenge is a nice test, I’m very happy to participate,” he said. “It’s clear that in these very short phases of the regatta, you have to get into it right away, whereas I’m a good stayer! But it’s also a good opportunity to do some starts and tactics. It’s an excellent warm-up and a great show for the public and partners. I like the human side of this race,” he added.